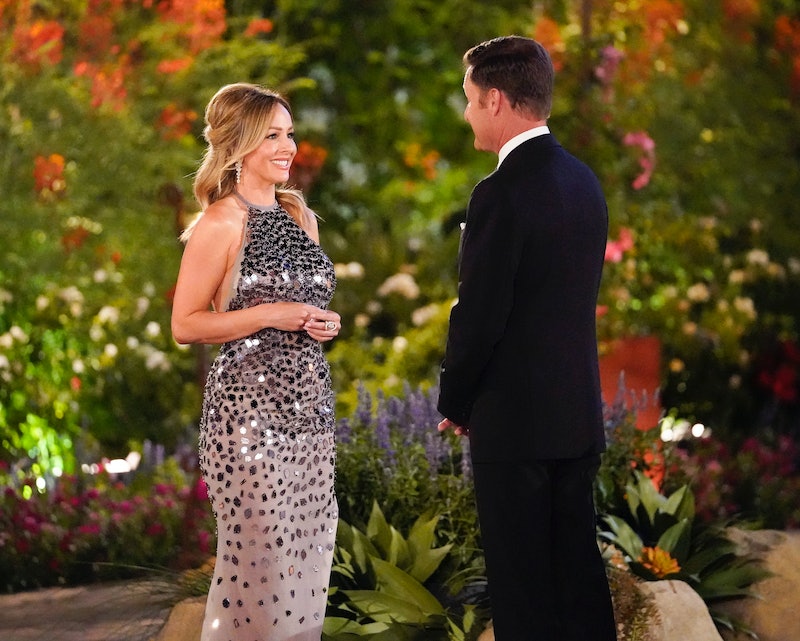 Waiting makes the heart grow fonder — and apparently, it also helped Clare Crawley find the man of her dreams. While speaking about the production delays that affected her upcoming season, Clare said she's glad The Bachelorette was delayed because recasting allowed producers to find contestants who were a better potential match. Though The Bachelorette was originally scheduled to start filming in March, production on Clare's season was postponed until August due to concerns over the ongoing coronavirus pandemic.

"There were definitely a lot of emotions," she told People about learning about the production delay. "It was stressful. But there were also honestly so many pros to it getting shut down." In particular, Clare cited the fact that the delay meant that some of the men who were originally chosen for her season had to be recast, due to scheduling conflicts or work obligations. "Producers were able to recast some of the guys and get some that were more appropriate for what I was looking for," the Bachelorette explained, adding that she "wanted a guy who was genuinely there for me."

Clare also addressed the criticism from Bachelor Nation, many of whom felt that the group of men who were originally cast were too young to date the hairdresser, who turned 39 in March. "There was a lot of talk about, ‘Oh, I'm the older Bachelorette, are these guys too young?'" she said. "But it was also about: Am I too old for them? It went both ways. So we were able to hone in on what everybody was looking for." Ultimately, she felt that all "the hoops they had to jump through" in order to get on The Bachelorette reassured Clare that the men she ended up with really wanted to get to know her.

"It was definitely a long anticipation for the first night," Clare continued, before adding that the extra-long wait to meet her men just made it even more exciting when she actually came face to face with her contestants. "To see the men standing in a room and know that most of them have the same interests and goals as I do, it really was magical." Plus, after months of quarantining by herself, Clare added, "Just being able to hug on somebody and love on somebody was so amazing. There was more of an appreciation. And goosebumps!"

Another benefit to filming The Bachelorette during a pandemic? Due to the fact that the entire season was filmed in one location, Clare was able to have her beloved dogs, Honey and Elbie, with her the whole time. "These two babies never left my side through all of the days in isolation when I was alone prior to filming," she wrote on Instagram, alongside a new promo featuring her golden retriever. "They give me happiness, peace, and unconditional love. What a gift it was when Chris Harrison and the producers called letting me know that because we were glued to each other during quarantine, they were not going to let them leave my side during filming."

Dogs aren't often invited on The Bachelor, but then again, rumor has it nothing about Clare's season will be typical. On Aug. 3, Deadline reported that Clare had found love with former NFL player Dale Moss early on, and ultimately decided that it wasn't fair to the rest of the contestants to continue on with filming. She reportedly left the show and was replaced as the Bachelorette by Tayshia Adams after just a few weeks of filming.

While neither Clare nor Tayshia have confirmed — or even commented on — the rumors, ABC and host Chris Harrison have hinted at the upcoming season's "shocking" twist. In a promo released on Sep. 15, Harrison tells a tearful Clare that she has "blown up The Bachelorette." And a few weeks later, he admitted that he's "never seen someone leave a bigger impression" on the franchise than Dale does during his time on the show. "There are a lot of rumors flying around," Harrison teased. "You may think you know everything but you don’t."

Clare's season of The Bachelorette will premiere on Tuesday, Oct. 13.