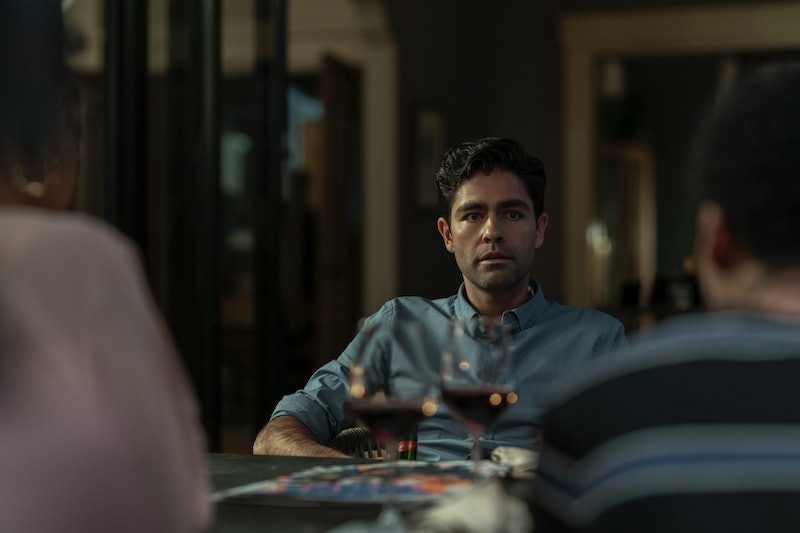 Spoilers ahead for Clickbait Season 1. Netflix’s new thriller series Clickbait opens with a mystery: when family man Nick Brewer (Adrian Grenier) is kidnapped and a video of him confessing to abusing women appears online, his family is left to figure out the truth about who he was — and stop 5 million people from watching the video, or else he’ll be killed.

Unfortunately, Nick’s fate is sealed early on; his body is found at the end of Episode 2. But it isn’t until the end of the season that what happened to him is explained. Nick was not, in fact, an abuser — but someone posing as him was. Nick’s colleague Dawn used his pictures and personal information to create accounts online and establish fake relationships with women. One of the women died by suicide, and it’s her brother who kidnapped and videotaped Nick in seek of revenge. (Of course, he didn’t know that his sister was not speaking to the real Nick).

After escaping, Nick pieced things together and went to Dawn’s house. Wanting to protect his wife’s secret, Dawn’s husband Ed killed Nick by striking him with a hammer. In the end, Ed is killed by police and Dawn survives. Clickbait concludes with Nick’s funeral, leaving little room for the story to continue in a potential Season 2.

This is by design: Clickbait was billed as a miniseries and was thus meant to be self-contained, though it’s hardly unheard of that a limited series is picked up for another season. Between Big Little Lies, The Flight Attendant, and more recently The White Lotus, it’s actually quite common. It’s possible, then, that Clickbait could return and explore a new story in Season 2, or follow another character from Season 1 — like Nick’s sister Pia (Zoe Kazan), his wife Sophie (Betty Gabriel), or even Dawn.

That being said, series creator and showrunner Tony Ayres has kind of made limited series his bread and butter. He also helmed the popular Australian miniseries The Slap in 2011, as well as the Netflix limited drama series Stateless, both of which spanned a single season consisting of six episodes and — similar to Clickbait — ended on a decisive note. So perhaps Ayers is only interested in telling standalone stories.

Between that and the less than stellar reviews (the show currently holds a 50% rating on Rotten Tomatoes), it seems unlikely that Clickbait will return for a second season. But this post will be updated if more information becomes available.