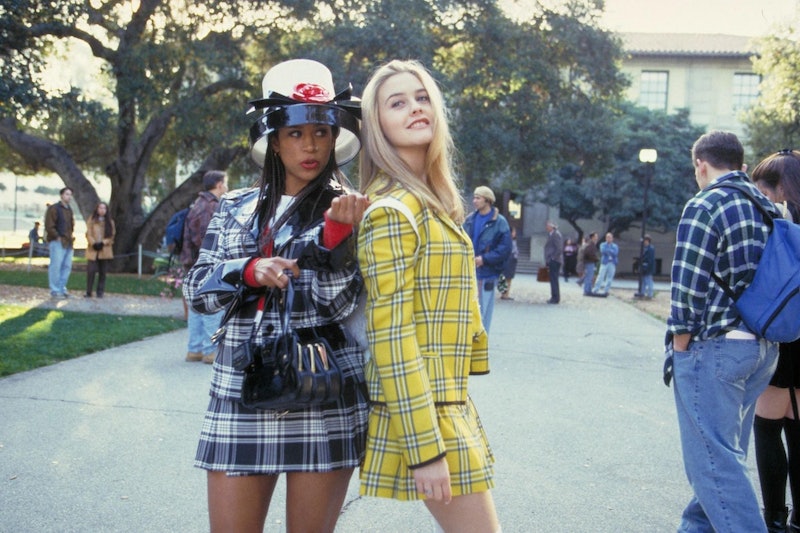 OMG, this news will have you totally buggin! According to a new article from Deadline, a Clueless spinoff about Dionne is headed to the streaming service Peacock, and will put a dark new twist on the iconic '90s romantic comedy. While the series doesn't yet have a premiere date, the Clueless spinoff has reportedly been in development since October 2019, where it was described by The Hollywood Reporter as "Mean Girls meets Riverdale meets a Lizzo video."

The updated Clueless — which was created by Will & Grace writers Jordan Reddout and Gus Hickey — will be a "baby pink and bisexual blue-tinted, tiny sunglasses-wearing, oat milk latté and Adderall-fueled" take on the 1995 film. Set in modern day Los Angeles, the spinoff will find Dionne (played by Stacey Dash in the 1995 film) stepping into the role of the most popular girl at Bronson Alcott High after her best friend, Cher Horowitz (made famous by Alicia Silverstone) mysteriously disappears.

From there, Dionne will have to deal with the pressures of being the new queen bee, while also attempting to unravel the mystery of what happened to her best friend. In other words: it's a lot scarier than accidentally ending up on the freeway during your driving lesson.

While darker takes on beloved '90s properties like The Fresh Prince of Bel-Air and Sabrina the Teenage Witch have been all the rage in Hollywood lately, Clueless seems like an odd choice to get the gritty reboot treatment. In Vanity Fair's 2015 oral history of the movie, writer and director Amy Heckerling revealed that Clueless was originally conceived as a TV series centered on a female character "fueled by relentless reserves of optimism," which explains Cher's peppy nature.

"I remember reading Emma [which Clueless is based on] and Gentlemen Prefer Blondes. Those characters: what I gravitated to was how positive they could be," Heckerling said at the time. "Sometimes you’re working on things and you think, Oh, I have to write this, or I’d better look at my notes. And other times you just want to. That was how I felt writing Cher. I just wanted to be in that world, and in her mind-set."

While neither Heckerling nor anyone from the film's original cast — which included Paul Rudd, Donald Faison and Breckin Meyer — have commented on the Clueless spinoff, there has been some talk of bringing the beloved characters back to the big screen in the future. In April 2020, Silverstone told Entertainment Tonight that her 8-year-old son, Bear, had pitched a possible Clueless sequel. "One night we were laying in bed and he wrote Clueless Part 2 and what and where Cher would be," she recalled. "It was unbelievable what he thought. She was an alcoholic but he didn't say those words. He was like, 'She drinks a lot and maybe she's a makeup artist? Like a professional makeup artist.'"

Still, it sounds like Silverstone may be more on board with a fun new take on the story than a straightforward reboot. "I think what’s really hard about Clueless to re-do it is that Cher learns how to become a whole human," she said when asked about a sequel or revival. "Where do you pick her up? Do you pick her up from the evolved self or do you pick up from she's relapsed and now she's back to her old ways? I don't know where you go." Looks like the only solution is to go much, much darker.