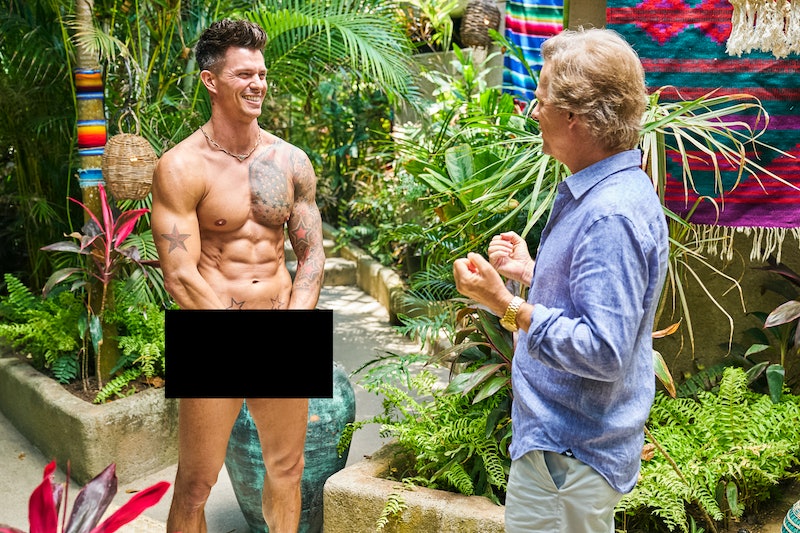 Viewers have often wondered just how legit Bachelor in Paradise and its fellow franchise series truly are, but the latest debate isn’t about whether or not a connection was real. Rather, it’s a question of Kenny Braasch’s nudity (or lack thereof) throughout BiP’s Season 7 premiere.

As the model and boy band manager from Clare and Tayshia’s season explained, he’s 40 and proud now. “I’m in pretty much the best shape that I’ve ever been in,” he said upon his BiP re-introduction. “I’m not gonna hide this sh*t anymore ... I’m not putting all the work in for no one to see it.” From his arrival on, Kenny appeared to stay true to his word. He was apparently in the buff when he met host David Spade, who wisely reminded the model to apply some extra sunscreen, and went commando while connecting with his fellow contestants, too.

Or did he? Despite there being an obvious censor bar over Kenny’s crotch throughout the episode, several viewers pointed out the logistic implications of his “no clothes, no cares” vibe. Twitter user MissSchliez wondered how Kenny’s mic pack — a familiar device to all reality TV lovers — would have connected if he were really wearing no clothes at all. And user tlkingtothemoon was more than a little disturbed by Serena slipping into her beach wrap after lending it to Kenny for a makeshift cover-up.

Then, the plot thickened. Several more users noted that Kenny seemed to be wearing a tiny swimsuit in one group scene — an apparent editing slip-up.

The Dipp also astutely pointed to a trailer moment where the guys were running down the beach, and Kenny was, indeed, wearing a swimsuit (albeit a teeny one) with the rest of them. Of course, if Kenny’s nude look was all an illusion, then he’s surrounded by some pretty great actors because everyone seemed to operate as though he were truly naked. As Twitter user realitybysteph put it, they all deserve an Oscar.

Even if Kenny’s bold display wasn’t authentic, it did add to the never-ending chaos that is BiP — and that alone made it worth the editors’ surely time-consuming censor job.