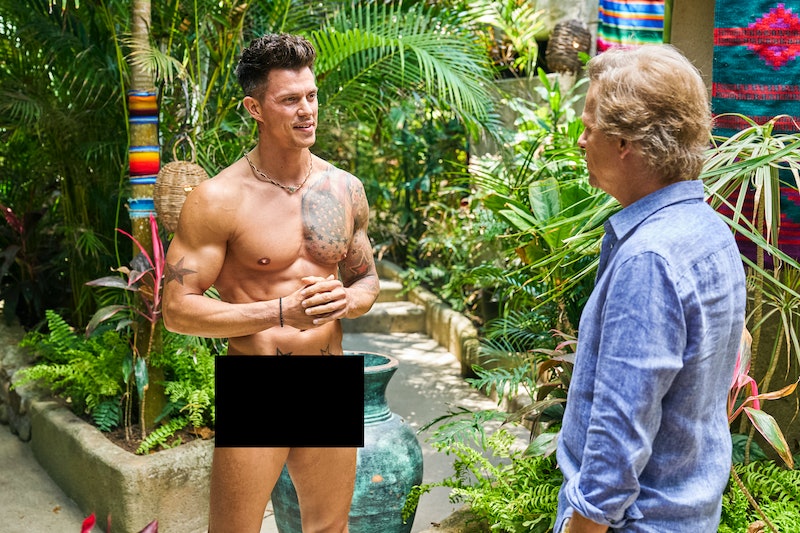 After taking a nearly two-year hiatus amid the coronavirus pandemic, Bachelor in Paradise is set to return on Aug. 14. Among the 23 former Bachelor and Bachelorette contestants arriving at the beach is boy band manager Kenny Braasch from Clare Crawley and Tayshia’ Adams’ season of The Bachelorette. From wearing a questionably small Speedo to moaning over a loudspeaker, Kenny was one of the more memorable contestants, and he’s already found a way to be as equally ridiculous on BiP. Here’s everything to remember about him ahead of the premiere.

When he competed on Clare and Tayshia’s season, Kenny’s official job was “boy band manager.” But according to Kenny’s LinkedIn profile, his more professional title is talent buyer, event coordinator, and manager. Working out of Chicago, Kenny is responsible for sourcing all entertainment for a venue in the Southside (called 115 Bourbon Street).

As Kenny explained to The Chicago Tribune, he also helped to start a boy band night at 115 Bourbon Street. This led to Kenny actually recruiting for and founding a band named The Boy Band Night in 2014. “It’s like a live tribute to boy bands,” Kenny said. “A lot of people think that that was a fake occupation on the show, and surprisingly, it’s actually real.” The group covers a mixture of Backstreet Boys, *NSYNC, and One Direction, among others; fittingly, former *NSYNC member Lance Bass will be a guest host on BiP this season.

Based on Kenny’s Instagram, he’s already figured out a way to make his mark on BiP by showing up fully nude to greet guest host David Spade. “I’ve been in the modeling industry for over 10 years now. That stuff doesn’t even bother me, to be honest,” he told The Chicago Tribune, referencing how often he ended up stripping on The Bachelorette. “I think that’s why I was so comfortable with it on the show ... it was sort of just like business as usual.”

Many of Kennys’s Instagram posts show him in similar states of undress, though he also shares his hangouts with fellow Bachelorette contestants and videos of his boy band.

What Happened To Kenny on Clare and Tayshia’s Season

As Kenny explained to The Chicago Tribune, he initially signed on for Clare’s season because, like her, he was 39 at the time. But after she quit the show to be with Dale Moss, Kenny struggled to make a connection with Clare’s replacement, Tayshia. He admitted that they didn’t seem to be on the same page, and Tayshia sent him home in Week 7.

He never went on any one-on-ones, but he managed to stand out during the various challenges, mostly for very amusing or questionable reasons. During Clare’s controversial game of strip dodge ball, Clare commented to former host Chris Harrison, “Look at Kenny’s *ss. Just take a good look at it. How is he so tan?” When he was tasked with writing a love song for Tayshia, his rhyming of “heart” with “start” did not win anyone over. And when he hinted what a night in the fantasy suite with him would sound like during a truth-or-dare date — which included him loudly moaning — judge and former Bachelorette star Becca Kufrin said she would send him “to the ER” if she heard that.

Kenny’s humor — and apparent affinity for nudity — may not be for everyone, but who knows what could happen on Paradise.