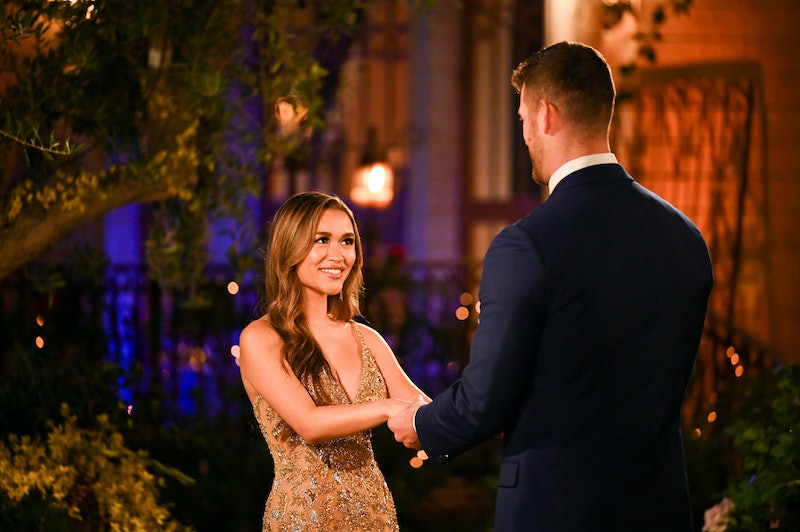 You know what they say: The couple that runs through downtown Los Angeles naked together, stays together (or something like that). After earning a group date rose earlier this season, Bachelor Clayton Echard invited 23-year-old Sarah Hamrick on an extreme scavenger hunt through downtown Los Angeles. The pair smashed piñatas, ran around in their underwear, and even serenaded each other in public before sitting down for a romantic, candlelit dinner at the immersive Van Gogh exhibit.

Sarah, who’s part Vietnamese, told Clayton about her experience as a biracial woman who was adopted into a white family. She said that she used to feel “really ashamed” of being adopted because it always felt like she was a “second choice.” This could foreshadow that Sarah will ultimately be Clayton’s first choice, but for now, it’s proof that she’s at least a serious contender. “One of the best things I’ve said yes to is coming here,” Sarah told the 28-year-old athlete before accepting another rose. “I feel like you see me for me.”

Based on Sarah’s Instagram, it also seems like her time on the show was a mostly pleasant experience. In December, she posted her Bachelor headshot and bio on the social media platform. “Well.....” she wrote alongside a rose emoji. Then, one week before the premiere, she shared a photo of the moment she first met Clayton. “Meet me at the mansion? Okay cool see you next week!” she wrote. She also posted photos from her premiere party and some snaps of her and Clayton kissing. “Trust me we clean up well,” she teased.

Further proof that Sarah makes it far can be found in this season’s trailer. Sure, there’s some footage of her sobbing, but there are also a few short clips of her and Clayton making out, which means she sticks around long enough to leave the mansion and do some world traveling. According to Reality Steve, Sarah went with Clayton and his final nine contestants to Croatia, where she was invited on another one-on-date and received yet another rose. The following week, she reportedly joined Clayton and the remaining seven women in Vienna.

But it seems things went downhill fast. Later on in the trailer, Clayton confessed to falling in love with three women before admitting to two contestants that he had sex with both of them. One woman stormed off and burst into tears. “I’ve never felt pain like this before,” they said. If Reality Steve is correct, Sarah and Rachel Recchia were the women that Clayton got “intimate” with, but he ultimately eliminated Sarah in Vienna and offered a rose to Rachel instead.

Now, there are times Reality Steve has been incorrect, so while things certainly aren’t looking up for Sarah, she still has a long journey ahead and a ton of support. “Sarah matched her bra and underwear without knowing she was going to have to be in a bra and underwear? Pick her she has her life together,” one fan tweeted while watching her and Clayton’s one-on-one. Another fan commended Sarah for being so vulnerable about her past. “As an adopted person, Sarah said how a lot of us feel perfectly,” they wrote. “So proud of her.”

Regardless of whether or not Sarah is the one for Clayton, what we do know is that the Missouri native found love on the show. “I was a little skeptical going into the whole journey, but I’m so pleasantly surprised that things worked out much different than I thought,” he revealed on Good Morning America in December. “Again, I’m just so excited to watch it back and have everyone else watch it as well.” And if Sarah isn’t the one for him, let’s be real: There’s always Bachelor in Paradise.