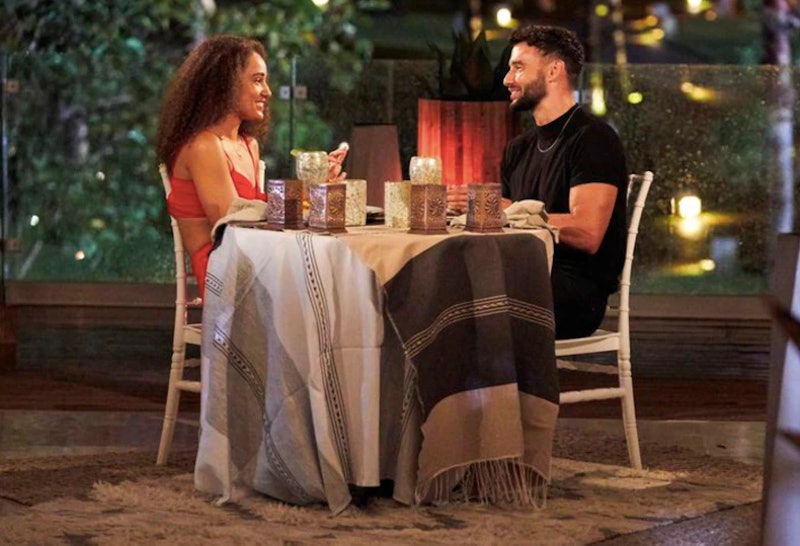 The Bachelor franchise rarely gets off on being relatable. Dramatic? Check. Suspenseful? Sure. But realistic? Not so much. Yet, on this season of Bachelor in Paradise, the contestants who want to both keep their options open and keep a good thing going are acting like a couple of regular ol’ Ryans from Hinge.

Right when Natasha Parker was starting to wonder if there was a something real with Brendan Morais, the arrival of Pieper James threw everything into question. Though Natasha’s cast mates warned her that Brendan and Pieper had been seeing each other before the show, Brendan denied it, saying they’d only met a month ago and had hung out two times. Yet, upon Pieper joining the cast, it became abundantly clear Brendan had severely downplayed their relationship, and he promptly ditched Natasha, even calling her “annoying.”

A similar lopsided triangle happened shortly after, when Chris Conran, who had been a “strong couple” with Jessenia Cruz, quickly dumped her when Alana Milne arrived on the beach. Though he’d stated he was there for Jessenia, Conran and Milne also had a fling prior to the show.

And while most of us will never experience the unique trials of dating other wannabe-influencers at the Playa Escondida Resort, you’ve probably experienced some level of this dating don’t. I like to call it relationship contouring — just like a beauty guru snatching their nose, it happens when the person you’re talking to downplays either your relationship to them, or their relationship to other people.

There’s something deeply mesmerizing about makeup YouTubers reshaping their whole face with a stick of ​​concealer and some highlighter — it’s almost as mystifying as the person you’ve been seeing for weeks saying your relationship “isn’t that serious,” or saying they’re not seeing someone else when, in reality, they’re fully on that person’s main.

While it’s totally acceptable to date around, see multiple people, or want to keep things casual Anita Chlipala, couples counselor and author of First Comes Us: The Busy Couple's Guide to Lasting Love, explains that healthy dating means everyone involved completely agrees on what’s happening and how “serious” the relationship is.

Relationship contouring can involve straight-up lying, like saying you’re single when you’re not, but it can take a more subtle shape in the form of half-truths or lies of omission — for example, saying you’re “just hanging out” with someone you have strong feelings for, or in Brendan’s case, saying something is “not that serious” when Pieper is literally visiting you in Boston.

“When you’ve been investing your time, heart, and energy in a relationship, it certainly hurts to have a partner downplay the significance of the relationship,” says Dr. Carla Marie Manly, clinical psychologist and author of Date Smart.

“Trust in a relationship is built on a foundation of honest interactions,” Dr. Manly tells Bustle. “When a person you have feelings for lies to you about their level of commitment to someone else, deep feelings of doubt and mistrust can be triggered.”

Downplaying Your Relationships Can Be A Form Of Gaslighting

Obviously, lying isn’t cute, and feeling played by someone you were really into sucks. Yet Chlipala and Dr. Manly explain that relationship contouring isn’t just hurtful, it’s harmful.

“Being on two completely different pages in terms of commitment can leave one feeling blindsided,” Chlipala says. “When this happens, it can be more difficult to be vulnerable in the relationship, it can create or increase anxiety and insecurity, and it can make it difficult to trust the next person you date.”

In addition to creating long-term trust issues, Chlipala says that having someone downplay your relationship with them, or their relationships with others, can be a form of gaslighting, which happens when someone makes you question your reality or perception of a situation.

“If things were good in a relationship, and then you felt blindsided by your date, you wonder what’s real and what isn’t,” she says. “You may even start questioning how things ‘should’ be, and wonder if you were wanting too much.”

Per Dr. Manly, relationship contouring is a way for your partner to get the upper hand in the relationship. “Those who play games often get a ‘high’ from the sense of power that comes with manipulating others,” she says.

How To Prioritize Honesty In Your Relationships

Relationship coach Lee Wilson shares that healthy dating is all about transparency. “No one should have to endure the stress of being their own detective,” Wilson tells Bustle. “The person sitting across from you on a date deserves to know if you are thinking of the relationship in different terms than they.”

If you’ve been hanging out with someone for a while and think that you’re getting more serious, it’s time to have the “what are we?” talk. Though it can be intimidating to initiate, it’s important to know where your date stands.

“People who want to pursue a relationship don't describe it as being ‘casual.’” Wilson says. “It’s an indicator that you ought to move on.”

According to Dr. Manly, one of the best ways to nip relationship contouring in the bud is to take time alone to reflect on your date’s behavior. Have their actions been aligning with their words? Do you feel comfortable asking them about being exclusive?

“The more you become accustomed to seeing a person for who they are, rather than who you wish they’d be, the better success you’ll have in the long term,” Dr. Manly says.

Though it’s easier said than done, Wilson shares if you start getting the sense your date is lying about their involvement with others — it’s probably time to walk away. “If you can't trust someone, the relationship might be doomed already,” he says.

While you’re never entitled to invade someone’s privacy, (i.e. reading their texts or breaking into their GMail to see their Uber receipts), you’re allowed to ask them about their behavior. Are they super defensive about their phone? Always texting someone else? Do they cancel plans a lot? Open the conversation up about your feelings or patterns you’ve noticed, and make space for them to state their side. From there, Wilson suggests letting the dust settle.

“Evidence often presents itself with time,” Lee says. “After time has passed, reevaluate the trustworthiness of this person.” While they may get their act together, if your date keeps being shady, Lee says it's probably time to call it quits.

Of course, snakes can get into even the most guarded gardens. And if you find yourself played by a player, Dr. Manly says it’s never your fault.

“If you find yourself caught in a manipulator’s web, don’t blame yourself,” she says. “Simply brush yourself off, learn whatever you can from the experience, and move forward feeling grateful that you didn’t end up with a toxic partner.”

More like this
Breeding Kinks Have Been On The Rise Since Roe V. Wade Got Overturned
By Lexi Inks
Help! I'm Not Getting Any Attention On Dating Apps. What Can I Do?
By Sophia Benoit
Everything To Remember About Lace Morris Before 'Bachelor In Paradise' Season 8
By Grace Wehniainen
Kira's Post-'Bachelor In Paradise' Activity Has Included Travel, TikTok, & Tea
By Grace Wehniainen
Get Even More From Bustle — Sign Up For The Newsletter