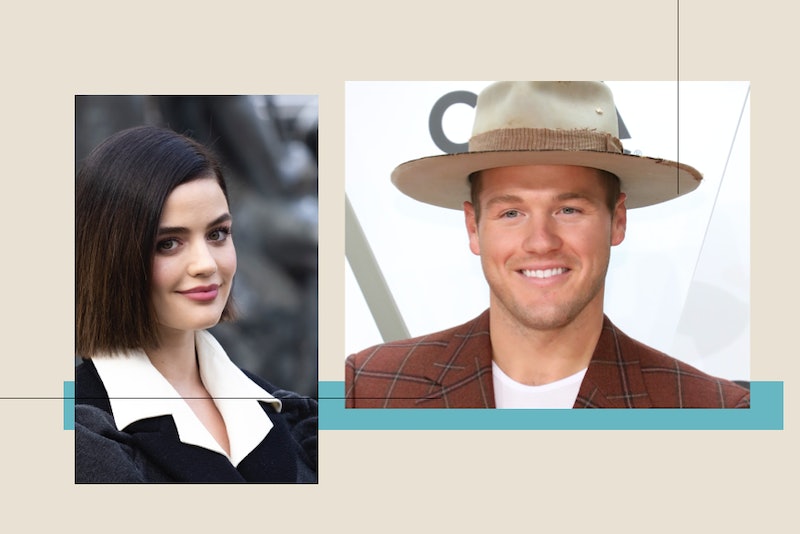 A little over a year after his season wrapped, it seems like one former Bachelor may have once again found love with a fellow TV star. Colton Underwood is reportedly dating Lucy Hale after splitting from Cassie Randolph in late May, according to TMZ. The pair have reportedly been "seeing each other a lot" over "the past few weeks," with a source telling the outlet that the Pretty Little Liars star reached out to Underwood after learning of his breakup. (Bustle has reached out to representatives for Underwood and Hale for comment, but did not receive any immediate response.)

They were photographed taking a hike together in Los Angeles on Wednesday, July 15, and TMZ claimed that the new couple have been on several "casual hike dates" recently. According to reports, Underwood and Hale met through mutual friends, although the actor has previously spoken about her interest in Underwood to the press. "I’m super excited that Colton’s the Bachelor," Hale told People back in 2018. "He’s wholesome. He’s a good guy it seems like. He’s really beautiful to watch."

Reports of the new romance come just one day after Demi Burnett criticized Underwood for how he's handled the split from Randolph. During an appearance on the July 16 episode of the Chicks in the Office podcast, the Bachelor in Paradise star called Underwood "petty" for his recent Instagram post shading Randolph after she spoke with Chris Harrison on The Bachelor: The Greatest Season Ever. "I think that's ridiculous because she didn't even say anything about the relationship at all," Burnett explained. "I think he was just, like, being petty and trying to get a reaction out of her. But, I was really proud of her for what she said on her [Instagram] Story."

Burnett added that Randolph is "so respectful of the privacy they had," that she won't even tell her fellow Bachelor contestant and friend the real reason why she and Underwood decided to call it quits. "She had nothing bad to say about him," Burnett continued. "She cried at one point and she was just like, ‘It's really hard.' I know she cares about him so much. I don't even know what happened."

On May 29, Underwood and Randolph announced they had decided to break up after a little over a year of dating. In their respective Instagram posts, both of them explained that they were "meant to be friends" and that they intended to "remain a part of each others lives," adding that there was still a lot of love and affection between them. However, things took a more dramatic turn in July, when Underwood appeared to call out his ex for appearing on The Bachelor: GOAT and talking publicly about their split.

"When our relationship ended we agreed to handle things as privately as possible as we attempted to navigate our new relationship as friends. I chose to do that since we were living in this interim period, but obviously a lot changed this week," the former NFL player wrote on Instagram. "I have gained so much clarity about what I want and more importantly what I need in a relationship. I’m so excited for this next chapter of my life with new stories and new people."

In response, Randolph claimed that Underwood was attempting to "monetize" their breakup and that it was actually him who violated their agreement not to speak publicly about the split in a series of Instagram Stories. "It seems you are subtly engaging in a tactic that peppers in aggressive comments such as 'that obviously changed this week' in order to make me look like the bad one," she wrote. "Colton, you can do what you want, but please do not have a double standard."