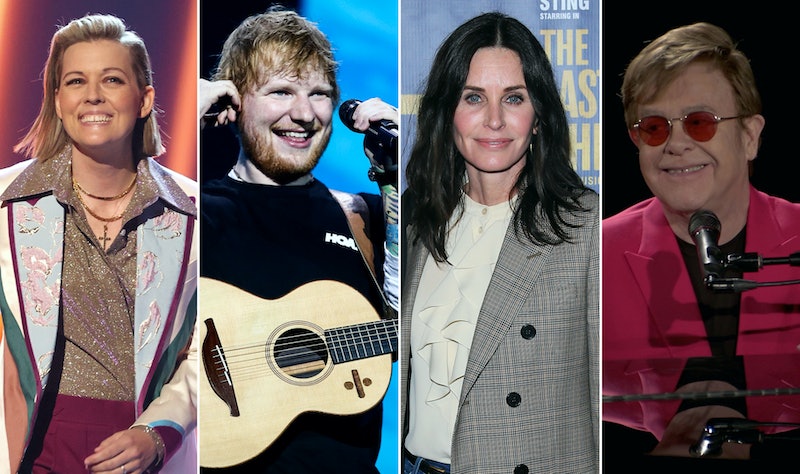 If HBO Max’s Friends: The Reunion showed us anything, it’s that the legendary sitcom has a whole host of famous fans. Justin Bieber, Cara Delevingne, Mindy Kaling, Malala Yousafzai, David Beckham. And now we can add Elton John to the list. In possibly one of the best Instagram posts this year, the Rocketman singer joined Courteney Cox, Ed Sheeran, and Brandi Carlile in an epic rendition of Tiny Dancer that they dedicated to Lisa Kudrow. And, trust me, it’s the most joyous thing the internet has produced for quite some time.

In the video clip, Cox bravely played the piano, while Sheeran and Carlile jammed on guitar and John sang. The actor dedicated the singalong to her co-star Lisa Kudrow, who played kooky Phoebe Bouffay in the hit series. As true Friends fans will remember, Phoebe mistook the lyrics to be a tribute to actor Tony Danza.

“One of the greatest moments of my life,” said Courteney Cox in the caption. “This one’s for you @lisakudrow. #phoebe#tonydanza#tinydancer” she added.

In the brilliant Instagram post, which now has more than 4 million views, the unlikely quartet actually sang the funny alternative lyrics “Hold me closer Tony Danza” and, unsurprisingly, Kudrow freaked out.

“Whaaaaaat??? That’s the most exciting thing ever!!!!” said Kudrow in the comments.

And Kudrow wasn’t the only person to be blown away by the video.

“You’ve won the internet for the next 3 years,” wrote one fan. “This might be the greatest moment of my life too and I wasn’t even there,” said another.

Carlile, clearly shook by the moment said, “This moment is a life flashing before my eyes one lol. love y’all so much!!”

This isn’t first time Cox has jammed with Sheehan. In another epic Instagram post shared on May 31, (keep’ em coming, guys), the pair recreated Ross & Monica’s routine from Friends.

“Just some routine dancing with a friend...” Cox captioned the clip on Instagram. Sheeran, for his part, shared the hilarious video on his feed as well. “Had a reunion of our own this weekend,” he wrote before adding a series of hashtags that included “#friends4eva” and “#obviouslybetterthanross.”