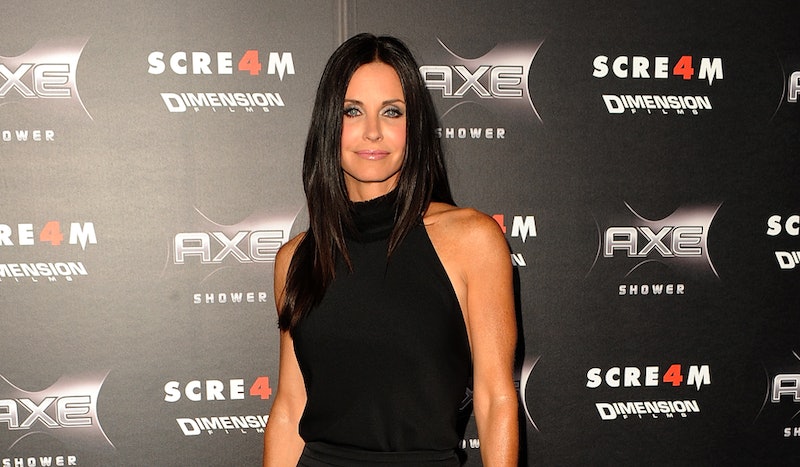 Courteney Cox is best known for portraying Friends’ Monica Geller, but that’s not the only iconic role she’s held. The actor has portrayed reporter Gale Weathers in the Scream horror movie franchise since 1996. Amid filming for the hotly-anticipated Scream 6, Cox shared an amusing, yet deeply sinister, video on her Instagram featuring the franchise’s terrifying masked murderer Ghostface.

In the clip, Cox can be seen sitting down on her sofa, in front of a big TV screen showcasing her house’s security cameras. “Just finished filming Scream... I’m so happy to have my work behind me,” she says. Suspenseful music then sets in, as Ghostface makes an appearance on Cox’s security cameras. First, the masked assailant is outside, but the final video shows that they have entered the house. The stuff nightmares are made of, that’s for sure. Cox captioned the video: “Does this B***H ever get tired?” Fans were quick to share their delight — and horror — in the comments section. But the best response came from the official Scream account, which quipped: “I’ll be there for you.” Well played, Ghostface.

Cox’s beloved Scream character Weathers has an on-off relationship with Dewey Riley, portrayed by the actor’s real-life ex-husband David Arquette, with whom she shares 18-year-old daughter Coco. Cox and Arquette struck up their romance when working together on the film franchise. They married in 1999, and finalised their divorce in 2013.

Although not much has been revealed about upcoming sixth instalment of the horror film franchise, we do know that it’s slated for release in March 2023. Speaking to Entertainment Tonight, Cox shared that the script for the upcoming release was “a really good one.” We can hardly wait.