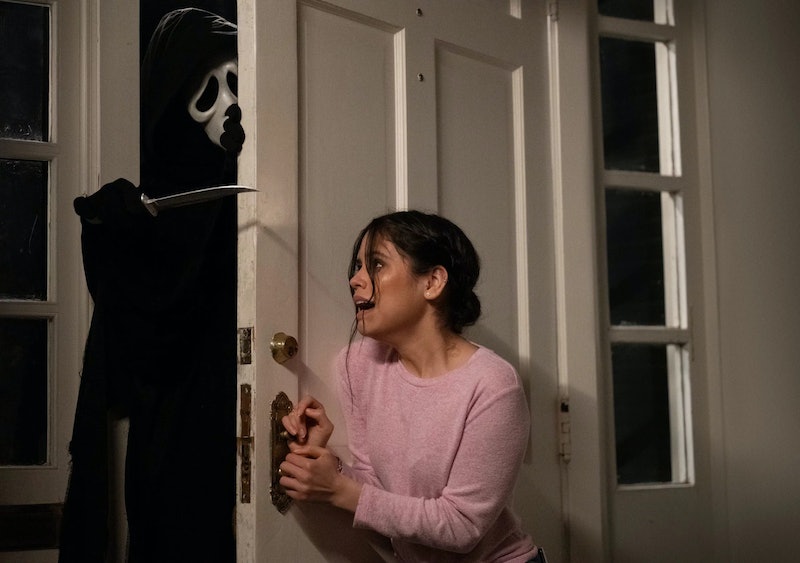 Diehard Scream stans have been waiting for a new installment for over a decade, and now, it’s finally here. Scream (2022) has been described as “a love letter” to both fans and Scream’s late creator, Wes Craven — and it’s the emphasis on “the fans” that makes the film’s final moments so chilling. (Warning: major Scream spoilers ahead!)

While the new Scream features a few of the franchise’s original stars — including Neve Campbell, Courteney Cox, and David Arquette — the film focuses on a new generation of Woodsboro teens. The action begins when Woodsboro native Sam Carpenter (In The Heights’ Melissa Barrera), a 20-something woman estranged from her family, returns to her hometown after her sister Tara (Jenna Ortega) is almost killed by Ghostface. Sam, accompanied by her boyfriend Richie (Jack Quaid), meets with Tara’s friends to piece together why Ghostface has returned. She decides to consult an expert: Dewey Riley (Arquette), now a retired sheriff, and divorced from Gale Weathers (Cox). While he initially declines, Dewey eventually agrees to help, bringing Gale and the OG “Scream queen” Sidney Prescott (Campbell) along, too.

As the film races towards its conclusion, the question remains unanswered: Who is the new Ghostface? Below, an overview of Scream’s ending, including who the new masked killer is, and the motives behind the latest Woodsboro murders.

Some of Scream’s familiar faces aren’t doing too well.

First, some context. When Sam and Richie approach Dewey, he’s living alone in a run-down trailer, drinking a (spiked) coffee, and watching Gale report the news. It’s later revealed that Gale and Dewey are semi-recently divorced; they split in part because Dewey wasn’t able to adjust to New York City, where they’d moved for Gale’s anchor job. Apparently, after only two months in the new city, Dewey left Gale in the middle of the night to return to Woodsboro.

After learning of the new Ghostface attacks, Dewey warns Gale via text not to come back to Woodsboro. Obviously, she ignores him and returns almost immediately. Their first meeting is somewhat tense, but the two ultimately put their hard feelings aside and work together.

Before that, Dewey calls Sidney to warn her as well. She’s living in an undisclosed city, seemingly nowhere near Woodsboro, and is married with children. Dewey also urges her not to return, as Ghostface is likely trying to lure her back. While Sidney initially expresses zero interest in coming to Woodsboro, or even assisting in the investigation, she eventually returns after (spoiler!) Dewey is murdered by Ghostface. Sad!

However, Sidney, Gale, and Dewey aren’t the only recognizable faces. It’s disclosed midway through that Sam is actually the child of Billy Loomis (Skeet Ulrich), the mastermind behind the original murders, making her both the primary target and lead suspect. Billy appears multiple times in Sam’s hallucinations, wearing the same blood-splattered white t-shirt from the first Scream.

The Scream franchise is known for being self-aware; oftentimes, characters will poke fun at tired horror tropes, even as the films drawn at them. This time around, Scream skewers the nature of Hollywood franchises.

This comes into play when Mindy (Jasmin Savoy Brown) arrives on the scene. The Woodsboro High student has ties to an old character: She and her twin brother are the niece and nephew of the late Randy Meeks from Scream (1996) and Scream 2, and she shares Randy’s interest in slasher flicks. Drawing on her horror genre knowledge, Mindy intuits that the killers’ aim is to reenact the original Woodsboro murders. These were the crimes featured in the first Scream film, and, in the Scream universe, the “Stab franchise” — a fictional series of slasher movies based on Sidney’s encounters with Ghostface.

Mindy declares this new spate of murders a “requel,” and predicts that it will copy the arc of the initial killing spree. She believes that the killers are trying to re-stage the events of the first Stab because the franchise’s most recent installment, its eighth one, was critically panned. Now that they’ve figured this out, however, they can use their knowledge of the original murders to get one step ahead of the killers.

Everyone is a suspect — that is, until the killers are revealed.

Mindy’s fan theory turns out to be correct, and the killers are revealed to be Richie and Amber (Mikey Madison), Tara’s best friend. At first, Richie and Amber appeared to be strangers; it turns out, they’d previously met on Stab’s Reddit page, and have been developing their murderous plans for a “re-do” since Stab 8’s release. Through their research, they learned that Sam was Billy’s daughter, and Richie wormed his way into her life before finding the perfect time to lure her back to Woodsboro.

As Mindy predicted, Richie and Amber’s motive was to put the Stab back in the fans’ hands by mimicking the first film. The final showdown even takes place in the former home of Stu Macher (Matthew Lillard) — the setting of Scream’s final scenes, which is now owned by Amber’s parents. Altogether, the new movie speaks to how fandom can become toxic, both in the Scream universe and in real life.

More like this
The 'Scream 6' Trailer Shows Off Hayden Panettiere's Return & Ghostface In NYC
By Jack Irvin and Jake Viswanath
How Andrea Riseborough Got Nominated — & Almost Disqualified For An Oscar
By Jake Viswanath
Anne Hathaway Shared A "Thrilling" 'Princess Diaries 3' Update
By Darshita Goyal
Austin Butler Recalls Lisa Marie Presley Showing Him Elvis’ Bedroom
By Jake Viswanath
Get Even More From Bustle — Sign Up For The Newsletter
From hair trends to relationship advice, our daily newsletter has everything you need to sound like a person who’s on TikTok, even if you aren’t.