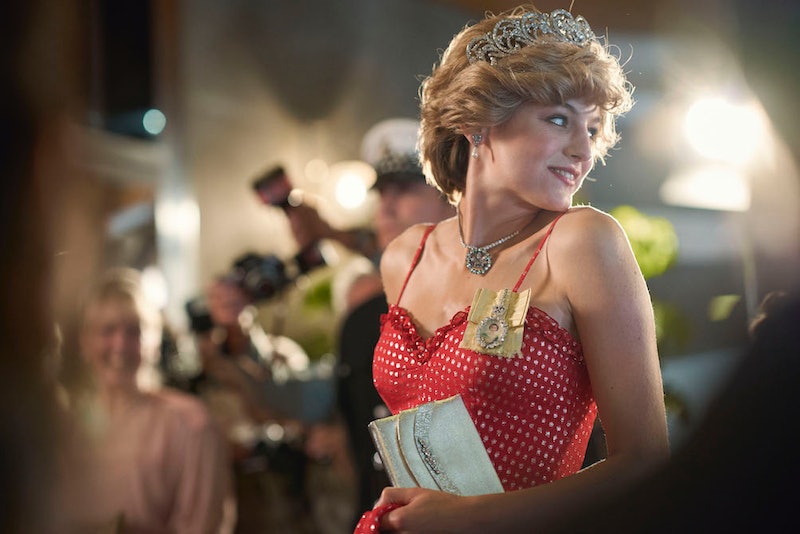 Prince Charles and Diana Spencer’s bittersweet courtship is front and center in the new trailer for The Crown Season 4. Released by Netflix on Tuesday, Oct. 13, the new full-length teaser gives a few glimpses at one of the most famed moments in British royal family history: Charles and Diana’s 1981 royal wedding, interspersed with bleak narration — presumably part of the wedding ceremony — about a “happily ever after.” Of course, Princess Diana would never get her fairytale ending, teasing a new season of doom and dread ahead.

“Here is the stuff of which fairytales are made,” a man narrates in a sharp British tongue. “The prince and princess on their wedding day — but fairytales usually end at this point with a simple phrase: ‘they lived happily ever after.’” As “husband and wife live out their vows,” the narration later continues, “they will be transformed in the process.” Brief clips of the two’s romance — and later, woes — are scattered throughout, with fans also getting a first glimpse of Prime Minister Margaret Thatcher, another iconic addition to the cast.

The new season will pick up at the end of the 1970s, with Thatcher, Britain’s first female prime minister, coming into power in 1979. Thatcher’s divisive policies will create some tension between her and the Queen this season, who must also contend with safeguarding the line of succession by finding a bride for her son, Charles. While Charles’ fairytale romance with Diana (dubbed the People’s Princess) manages to charm and unite the British public, turmoil brews behind closed doors.

There’s also the case of Charles' relationship with Camilla Parker-Bowles (Emerald Fennell), one that predates Diana and will soon present its own set of troubles when Charles must end his relationship with her in the late 1970s. “What’s interesting is it’s kind of echoing the same stuff that happened in series one with Vanessa Kirby’s character, Margaret,” O’Connor teased to Entertainment Tonight last November, citing Margaret’s relationship with Peter Townsend. “Again, you know, you can kind of see the echoes of those series.”

Season 4 of The Crown returns to Netflix on Nov. 15.

More like this
'The Queen’s Gambit' Season 2 Tweet Wasn’t From Anya Taylor-Joy
By Mary Kate McGrath, Jack Irvin and Grace Wehniainen
Netflix Shut Down 'Bridgerton' S3 Rumours About A “Very Dark” Storyline
By Bustle
'The Crown' Season 6 Has Suspended Filming "Out Of Respect" For The Queen's Death
By Bustle Staff
You Might Want To Rewatch This Key 'On My Block' Scene To Understand 'Freeridge'
By Grace Wehniainen
Get Even More From Bustle — Sign Up For The Newsletter
From hair trends to relationship advice, our daily newsletter has everything you need to sound like a person who’s on TikTok, even if you aren’t.