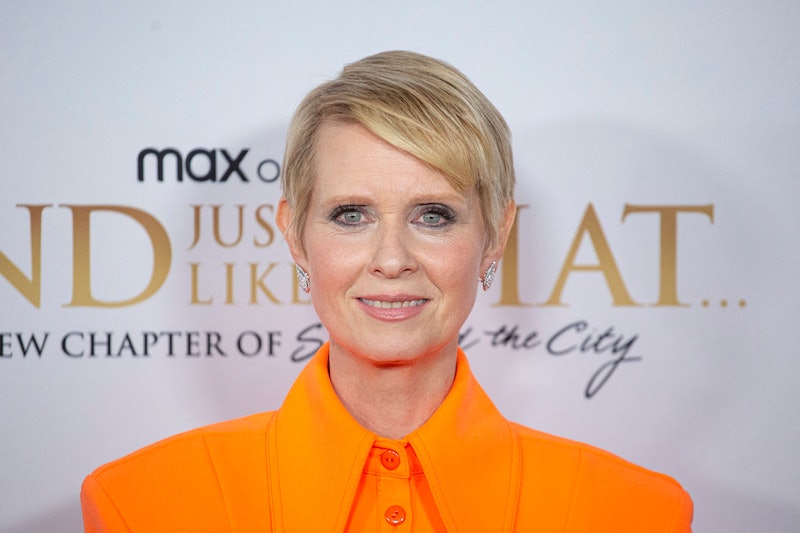 Cynthia Nixon wasn’t going to do the Sex and the City reboot unless major changes were made. In a recent interview with News Corp published by Australia’s Herald Sun, the 55-year-old actor turned progressive activist said she would’ve refused to be part of HBO Max’s And Just Like That... if it wasn’t significantly more diverse than the original series.

Nixon told the paper that she initially didn’t think she would return. “It was a very hard decision,” she said. “I really didn’t think I was going to do it — I was very reluctant. But the more I talked to Sarah Jessica, [writer-creator] Michael Patrick King, and Kristin [Davis], about the things that I couldn’t go back without – a real sea change in terms of the lack of diversity in the original series, they were on board.”

Fortunately, the show’s creators kept their end of the bargain. “I was floored by how hard everybody listened, and how collaboratively we worked together to, not just redecorate the house, but to build a whole new house – that had us in it but new characters, too,” Nixon said. The reboot includes a host of new cast members, including Grey’s Anatomy star Sara Ramirez. Ramirez plays Che Diaz, a queer, non-binary comedian and podcast host with progressive takes on gender and sexuality.

These changes mean a lot to Nixon, who identifies as queer and has a transgender son. And although she thinks the original Sex and the City was “occasionally tone deaf,” she told the Herald Sun that it still makes her “very proud.” “Being Miranda has opened up so many amazing roles for me over the years, but the further I get away from Miranda, the better they get, because people have stopped thinking of me as just that one character,” she said. “But Sex and the City gave me an adult career. And I’ll always be grateful for that.”

Nixon’s longtime co-star, Kristen Davis, echoed those sentiments, telling the paper that Sex and the City has “given me so much.” “It’s given me stability in my life in so many ways that I’m able to give to my children, which as an actor I’m infinitely grateful for,” she said. “And it’s given me a creative connection with my sisters that you never get as an actor where you get to work together for 20-something years. It’s the gift that keeps on giving forever and ever.”

More like this
Hilary Duff Is “Optimistic” About A 'Lizzie McGuire' Reboot
By Alyssa Lapid
'Wednesday' Star Emma Myers Thinks A Wenclair Storyline Is “Possible” In Season 2
By Alyssa Lapid
Ashton Kutcher Wants Danny Masterson “To Be Found Innocent” In Rape Retrial
By Jake Viswanath
Michael B. Jordan Tackled His "Public Breakup" With Lori Harvey On 'SNL'
By Brad Witter
Get Even More From Bustle — Sign Up For The Newsletter
From hair trends to relationship advice, our daily newsletter has everything you need to sound like a person who’s on TikTok, even if you aren’t.