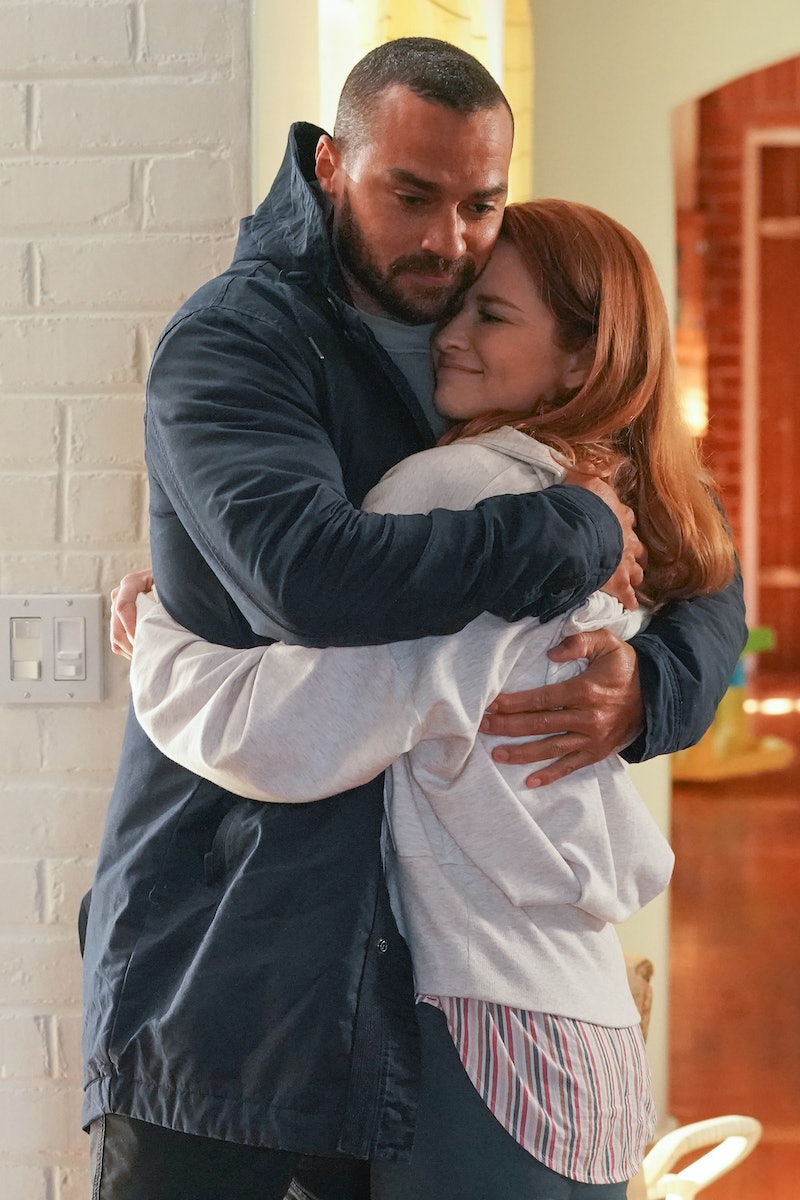 Spoilers ahead for Grey’s Anatomy Season 17, Episode 14. In the bittersweet Japril reunion episode of Grey’s Anatomy, viewers shed some happy tears — and plenty of sad ones, too. The highly anticipated installment leaves the door wide open for Jackson and April to be together once and for all: Matthew’s out of the picture, and all signs point to Japril being endgame when they move to Boston to effect change at the Catherine Fox Foundation. (As April says, “Fingers crossed for new horizons.”) Unfortunately, the happy ending does come with Jesse Williams’ surprise departure from the show after 12 seasons. Even though his character is leaving on a very positive note, working toward racial equity in medicine, his absence is sure to sting for fans who have been following Jackson’s arc since his orange-scrub days. And the brimming nostalgia of the May 6 episode was enough to make longtime Grey’s fans wonder about the possibility of another reunion between two beloved Grey Sloan alums: Callie and Arizona.

When Arizona (Jessica Capshaw) moved to New York to be closer to Callie (Sara Ramirez) as they co-parent Sofia, the women were on good terms — similar to Jackson and April’s setup. We don’t know if Calzona ever got back together romantically after reuniting in New York, of course. And even if they did, their return to Grey’s might not make sense if they’re doing their thing on the East Coast. But Twitter users were quick to point out that it’s possible. And sometimes, that’s enough.

Several users tweeted Calzona fancams at Ellen Pompeo, who also serves as a producer on Grey’s. “We are begging. Bring them home,” wrote merderrobbins.

The same user asked Pompeo to wink if Jessica Capshaw might return, even via flashback. It’s not a bad approach to take. Before the Japril episode, one TikTok user asked Sarah Drew to touch her hair if Jackson and April were going to get back together, and she did. Cue the glancing eyes emoji.

Others remembered that the 10-year anniversary of Callie and Arizona’s wedding episode was just a day before Japril’s emotional reunion.

Another user pointed out that several major Grey’s couples got their “endgame” this season (Meredith and Derek’s wedding and Lexie and Mark’s splashing around on the beach), suggesting that it’s only fair Calzona gets the same treatment.

Playing on the candles featured in the May 6 episode, one user said they were manifesting more Grey’s returns, including Calzona.

Another seemed to acknowledge that Callie and Arizona’s return could be a long shot — but one they were fully invested in anyway.

Callie and Arizona are already off the show, so if Grey’s did decide to bless fans with some Calzona content, they wouldn’t need to write around any major plot obstacles. Even a brief snippet of the two hanging out with Sofia in New York or connecting with the Grey Sloan surgeons via video would be a welcome surprise.

Plus, having recently shown up to support the current Grey’s cast on a Stars in the House charity event, Capshaw has proven that she’s still very much a passionate part of the show’s family, making a reunion appearance totally plausible. For Ramirez’s part, per The Hollywood Reporter, the actor tweeted in 2018 that “the ball is in [ABC’s] court” when it came to Callie returning, suggesting that they, too, would be down to return.

More like this
Twitter Simply Couldn’t Cope With The ‘Happy Valley’ Finale
By Sophie McEvoy
Netflix Shut Down 'Bridgerton' S3 Rumours About A “Very Dark” Storyline
By Bustle
Shonda Rhimes Responded To The Surprise Exit Of A Day 1 'Grey's Anatomy' Figure
By Grace Wehniainen
Everything To Know About 'RHONY' Season 14
By Jake Viswanath, Alyssa Lapid and Brad Witter
Get Even More From Bustle — Sign Up For The Newsletter
From hair trends to relationship advice, our daily newsletter has everything you need to sound like a person who’s on TikTok, even if you aren’t.