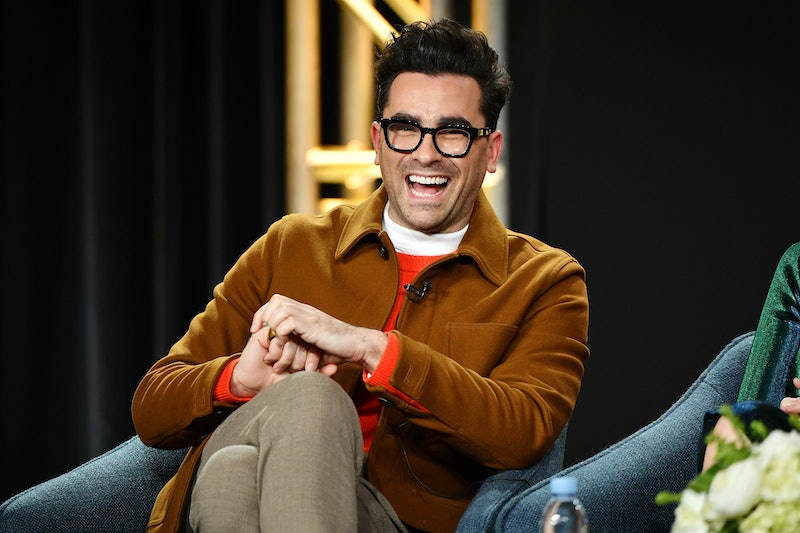 From his historic night at the Emmys to landing a ton of Golden Globe nominations and a much-anticipated upcoming Saturday Night Live appearance, it's been a busy few months for Dan Levy. Now, he's making his Super Bowl commercial debut with the help of M&M's.

The commercial, which premiered on Today, features everyday people using M&M's to help apologize to those they've wronged — for everything from mansplaining (made worse when the mansplainer tries to explain what mansplaining is), to a gender reveal gone wrong, to calling a neighbor a "Karen." Of course, the neighbor's name is actually Karen, for which the neighbor offers a second apology and, naturally, a second bag of M&M's.

The final apology is from Levy himself, who tells a pair of anthropomorphic M&M's, "I promise I will not eat any more of your friends." After acknowledging the screaming M&M locked in his car that he's undoubtedly about to snack on, Levy says, "K, it might happen one more time."

"I think Super Bowl ads have such a place in pop culture, so to be approached by M&M to participate in this year's spot was so exciting," Levy told Today. "I read the script, and it was so warm and positive and community-based and about bringing people together. He continued, "That's sort of what I'm all about, so it was a very easy decision to make.”

Levy also shared with Today that he prefers peanut M&M's and spoke about his upcoming SNL gig. During the Feb. 6 episode, viewers can expect to see him draw upon his inner theater kid for inspiration, as he hasn't done that style of live performance since his high school days.

"I think the work that Kenan's done over the years is so special, and he's so comfortable and at ease in that spot considering it's live every week. And then you have Bowen Yang and Chloe Fineman, who just came in, like, really breathed such life into the show in these new, kind of interesting ways. I'm just excited to meet this cast,” Levy told the morning show.

T minus two days until Levy's fans get to see it all unfold.

More like this
The 2023 Super Bowl Commercials Feature A 'Breaking Bad' Reunion & Missy Elliott
By Alyssa Lapid
'Breaking Bad' Duo Walt & Jesse Are Back — In This Super Bowl Commercial
By Jake Viswanath
David Beckham’s Controversial Qatar Deal Skyrocketed His Net Worth
By Catharina Cheung
Jennifer Coolidge Recites “Jenny From The Block” Beside J.Lo In Her First TikTok
By Jake Viswanath
Get Even More From Bustle — Sign Up For The Newsletter
From hair trends to relationship advice, our daily newsletter has everything you need to sound like a person who’s on TikTok, even if you aren’t.