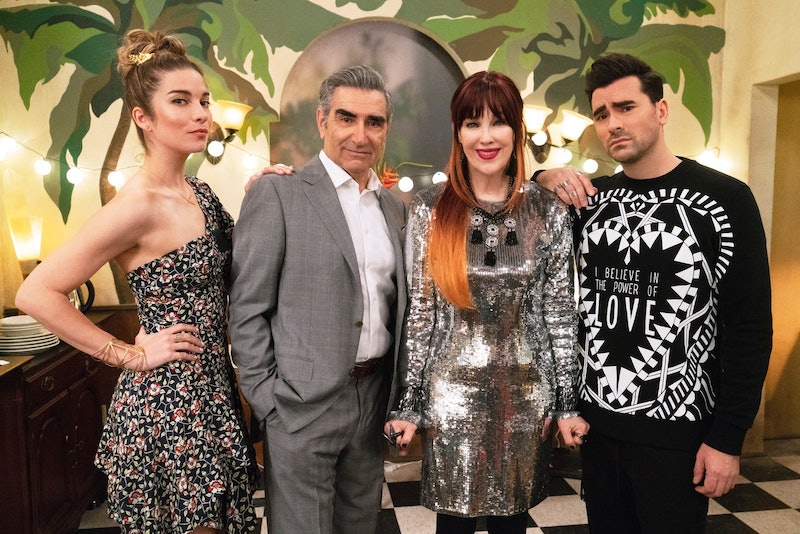 Residents of Schitt's Creek, rejoice! Schitt's Creek co-creator and actor Dan Levy is slated to host an episode of Saturday Night Live when the season returns on Jan. 30. The show's Twitter account unveiled a list of the heavy hitters that will join the second half of Season 46 on Jan. 22. Levy, along with musical guest Phoebe Bridgers, will grace the famed Studio 8H stage on the Feb. 6 episode. Levy joins a stacked lineup that also includes hosts John Krasinski and Regina King and musical guests Machine Gun Kelly and Nathaniel Rateliff.

The gigs mark the SNL debuts of all three hosts. Krasinksi was initially slated to host a March 2020 episode of the sketch comedy series to promote his new film, A Quiet Place 2, but production was shut down amid the height of the ongoing coronavirus pandemic. Krasinksi will host the Jan. 30 episode alongside Machine Gun Kelly, and King will host the Feb. 13 episode alongside Rateliff. On Twitter on Friday, Levy reacted accordingly to the news with a simple "OMFG."

It comes after a glimmering year for the Canadian comedian and actor, whose beloved Pop TV sitcom Schitt's Creek swept the 2020 Emmys in September following its sixth and final season. Levy, along with his father and co-creator Eugene Levy and co-stars Catherine O’Hara and Annie Murphy, took home statuettes in all major comedy categories.

The sitcom, which follows the wealthy Rose family after they lose all their money and relocate to a small town they purchased as a joke, also received five nominations at the upcoming Critics Choice Awards on March 7. Along with a Best Comedy Series nom, the two Levys, O'Hara, and Murphy also garnered individual noms.

Last year, Levy starred in Hulu's Happiest Season, a rom-com with Kristen Stewart and Mackenzie Davis, and HBO's Coastal Elites, a pandemic quarantine film with Issa Rae, Bette Midler, and more. The Emmy winner was also hailed as one of People magazine's Sexiest Men Alive in November. Levy opened up about life under quarantine in the interview. "I do think that there has been a sense of community that's been established around this quarantine,” he said. “Everyone going through a very similar situation in terms of having the same restrictions on themselves, I think it's forced us to communicate."

"It certainly opened up lines of communication for me," Levy continued. "In times of crisis, all you have to do is be grateful for what you have. I'm very curious to see what happens in the next year.”

More like this
Michael B. Jordan Tackled His "Public Breakup" With Lori Harvey On 'SNL'
By Brad Witter
The Black Lotus Staff Has "Had Enough" In The 'White Lotus' Spoof From 'SNL'
By Brad Witter
Who Is Pete Davidson Dating? He & Chase Sui Wonders Got Caught Kissing
By Jake Viswanath
This 'One Tree Hill' Wardrobe Error Is Going Viral On TikTok
By Brad Witter
Get Even More From Bustle — Sign Up For The Newsletter
From hair trends to relationship advice, our daily newsletter has everything you need to sound like a person who’s on TikTok, even if you aren’t.