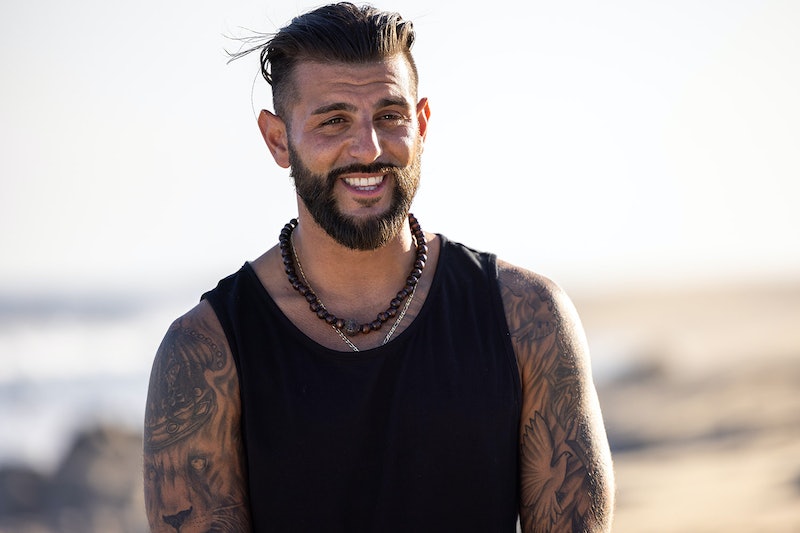 We’re halfway through Season 2 of FBoy Island, and things are already starting to unravel. The conceit of the reality dating show puts people’s emotions in a bind but who wouldn’t be stressed when you have to figure out who is secretly a nice guy or a fboy from a pool of suitors. The three leading ladies have to pick a nice guy to split the $100,000 reward, but if they pick a jerk, that fboy has the opportunity to take all the money for themselves. Six episodes into Season 2, and the suitors are starting to reveal their true natures. And to everyone’s surprise, New York’s own Danny Louisa was one of the bad apples.

Much like last season’s infamous villain and returning limbo guru Garrett Morosky, Danny is a crypto investor. According to his Instagram bio, Danny is also a bouncer for Bottled Blonde Miami, which appears to be a restaurant, beer garden, and club all rolled into one. Lastly, he serves as an ambassador for Bucked Up, a brand of pre-workout supplements that has close to 350,000 followers on Instagram.

Despite all the in-fighting that goes on during filming, the boys of FBoy Island seem to get along behind the scenes. Danny’s Instagram is evidence of that, as he’s posted photos with fellow villain Mercedes partying in Miami. In another photo, he and fellow cast member Tom Carnifax hit the gym together. Among the other posts in Danny’s feed, we see the contestant dressed up in suits and dressed down Knicks jerseys. He’s also posted some promo material for the show. It’s a faux magazine cover that features Danny and asks the question, “Can this bouncer rock your world?” Well, evidently yes but not for the reasons people may have hoped.

Danny came into Season 2 as a confident New Yorker, referring to himself as a “beast from the east.” To his credit, it didn’t take long for him to strike up a relationship with Mia, one of FBoy Island’s leads. He did so in retaliation to the presence of Peter Park, a former fboy from Season 1, who had since returned in hopes of turning over a new leaf. He spent the majority of the first few episodes antagonizing Peter, dubious of his true intentions, only to finally move his attention from a rival to Mia herself.

Mia and Danny clicked immediately. He carved out a special relationship with her, thanks largely in part to his protective nature. There was one instance where it appeared that Mia was having a medical scare, but Danny was on his way to offer her comfort. During private conversations, he spoke to Mia about how she was tearing his walls down and how if things didn’t work out on the show, those walls would go right back up.

It appears that after Episode 6, those walls may just be getting rebuilt because Danny royally screwed things up with Mia. The climax of the episode crescendoed with all the men having to reveal their status as either a fboy or nice guy. When it came time for the staunchly ethical and decent Danny to reveal himself, it came as a shock to everyone when he declared himself as a fboy. He did all he could to explain why he was the way that he was, citing past relationship trauma and mistrust as reasoning for his fboy status. But it didn’t matter. Mia was far too tearful and distraught to listen to any of Danny’s explanations and abruptly walked away from the ceremony, meaning the Big Apple’s bad apple may have blown his shot.