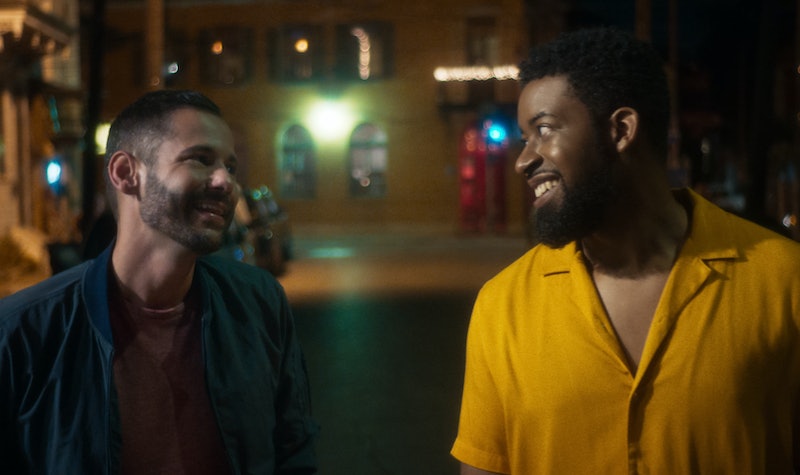 Reality TV often feels like a misnomer: the genre peddles a kind of fantasyland in which a bunch of young, conventionally attractive, predominantly white and straight people flirt, fall in love, and get married. It wasn't until June 2020, after 18 years on air and a fan-launched campaign for more diversity, that ABC cast its first Black Bachelor. And it's not just the Bachelor franchise: Netflix's hit reality dating series Love is Blind was criticized for failing to include any plus-size contestants, while the UK's blockbuster dating show Love Island has rarely ever featured queer stars, for example.

"It's all based on fear," says John Carr, a seasoned reality producer who's worked on shows like Vanderpump Rules, The Hills, and The Bachelor franchise and is now the showrunner of Netflix's Dating Around. "The network is afraid to get out of a demographic that they know can be successful for them," he says — one that largely features white, straight, thin, cisgender contestants. "[But] I don't think we've seen enough experimentation outside of that to know that that's true."

A 2019 UCLA report found that people of color make up only 22% of all reality TV contestants, and it's even rarer to see leads who identify as plus-sized, disabled, and/or LGBTQ+. It's a startling disparity that in turn creates an industry-wide feedback loop: is it that audiences are only interested in one type of contestant, or have they just never been offered anything different?

Netflix's Dating Around suggests the latter. The show has made diversity its mission statement from the beginning, featuring a cast of varying ethnicities, sexualities, ages, and body types. Season 1 included a septuagenarian widower, while Season 2 features a bisexual Black woman who ends up on a date with a polyamorous man. Even the show's approach to its own rules is defined by its lack of rigidity. After five dates, the lead chooses one person for a second date — but that's just a suggestion, as Gurki from Season 1 proved by remaining single and as multiple contestants have proved by getting the phone numbers of more than one date.

Dating Around has been widely praised for its open-minded, casual approach to dating, which has rarely been seen on TV. One of the few other examples of genuine, non-optical diversity on a reality dating show came from Season 8 of MTV's Are You The One?, which featured a sexually fluid cast. Megan Townsend, GLAAD's director of entertainment research, noted the season received strong ratings and a hugely positive reaction on social media, but cautioned that TV is still far away from fully showcasing bisexuality and other queer identities.

That kind of diversity starts in casting. And though ensuring a diverse array of contestants will appear on a show does require some extra elbow grease, Dating Around casting directors Risa Tanania and Anthony Lucente say it's worth going the extra mile. "The people who are dying to be on TV, that you can get easily," Tanania says. For Dating Around, she and Lucente relied on research and community outreach in lieu of traditional casting calls. "You need time to make sure that you are going out of your way to walk into different neighborhoods, different communities, and make sure that you are being as inclusive as you can [be]."

Extra care is also taken to assure potential daters that their presence won't be used as a punchline — a fear they may have if they fall outside of reality TV's conventional beauty standards. "I think the individuals that 'boil faster' in the casting process are the individuals that have likely seen themselves on TV quite a bit," Lucente says. "Versus the people that maybe haven't seen themselves. And therefore you do have to build trust."

That means a tireless commitment to inclusion and empathy in order to achieve a relatively simple concept. As Carr says, "We just want to represent America as it really is."

More like this
Love Is Blind’s Natalie Claims Shayne Signed Up For 'Perfect Match' While They Were “Still Together”
By Brad Witter
Ozzie’s Coming Out Scene With Kitty On 'That ’90s Show' Has Twitter Sobbing
By Brad Witter
'Love Is Blind: After The Altar' Season 3 Has A Release Date & It's Very Soon
By Grace Wehniainen
Brittany Snow Files For Divorce From Tyler Stanaland After 'Selling The OC' Drama
By Grace Wehniainen and Radhika Menon
Get Even More From Bustle — Sign Up For The Newsletter
From hair trends to relationship advice, our daily newsletter has everything you need to sound like a person who’s on TikTok, even if you aren’t.