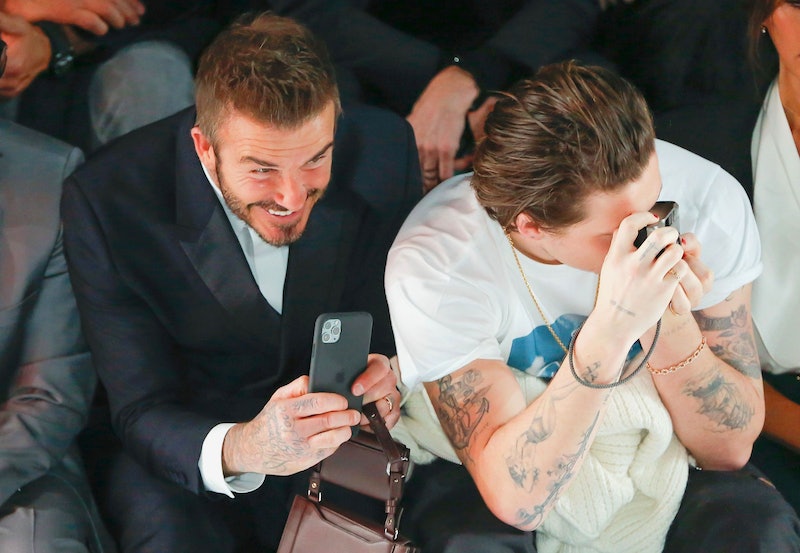 You can always count on the Beckhams to give us wholesome Christmas content and this year was no different. From their countryside home in the Cotswolds, David and Victoria Beckham posted a number of cozy family photos throughout the festive season. However, fans were quick to notice that David Beckham accidentally tagged the wrong son in his latest Instagram post, proving even the coolest dads make funny tech blunders...

In the shot, the former footballer is seen pictured in between his eldest son Brooklyn Beckham, 21, and the youngest of the three boys, Cruz, who is sporting a spikey bleached blonde hairdo. Alongside the sweet photo, the father of four captioned the image 'The Boys' with two hearts.

Although the caption has now been changed, it appears that Becks initially tagged Romeo instead of Cruz – and the comments section couldn't help but point out the mistake.

"Tagged the wrong kid, Dave" pointed out one fan, "erm... I could be wrong but pretty sure that's not Romeo?!" wrote another in the comments.

We suspect that David won't be able to live the error down for a little while but, to be fair, the Beckham boys are all beginning to look strikingly similar as they get older...

Regardless, Christmas proved a perfect opportunity for the Beckhams to reunite despite coronavirus restrictions making it difficult for most families in the UK to get together. In fact, the famous family even enjoyed a magical trip to Lapland UK (minus Brooklyn). David, Victoria, Romeo, Cruz, and Harper Seven experienced an incredible tour around the Winter Wonderland in Ascot and David even managed to visit Santa.

In a photo, which has close to 100,000 likes on Victoria Beckham's Instagram page, the model family donned matching silk pyjamas on Christmas Day.

"Merry Christmas everybody! Sending lots of love from us all x," wrote Victoria in the caption. "Family time is so previous x kisses" she added.