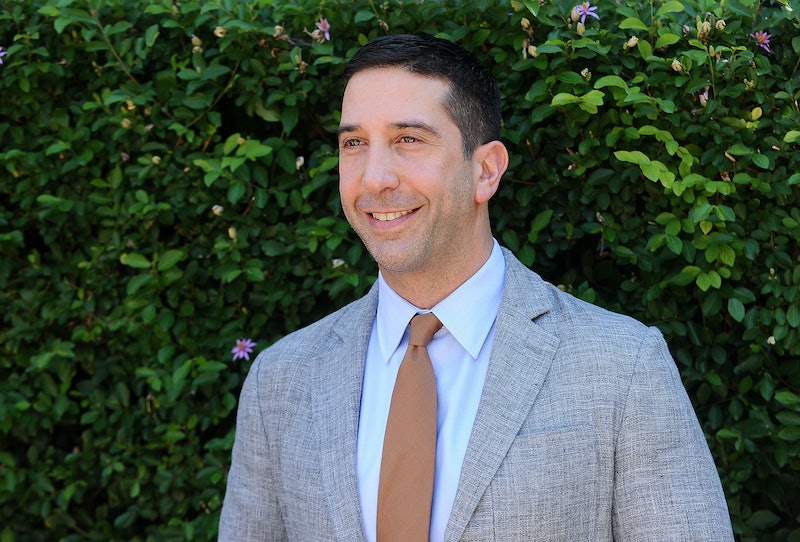 Have you seen the one where the whole Friends cast is finally on board for a reunion? Well, unfortunately, thanks to coronavirus, nobody has, but on Monday, David Schimmer teased the Friends reunion, confirming that he expected it to be a “really meaningful” experience — whenever it finally happens. Schwimmer discussed the upcoming special during an interview with Nick Mohammed, his co-star in the upcoming comedy Intelligence, revealing what aspect of returning to Friends the actor is most excited about.

Schwimmer, who played Ross Geller on the beloved 90s sitcom for 10 years, noted that getting back on set with his former costars would be a highlight, saying: “I guess what I'm honestly most looking forward to is just being in the room with those other five actors. It's five, right?” He added: “That was a joke.” The star also confessed he's eager to get back on the soundstage used for the original show — the reunion is set to take place at the iconic Stage 24 at Warner Bros. The idea of stepping onto the “actual sounds stage on the actual set" after being away for over 15 years would be “a really meaningful experience," said Schwimmer.

In February, HBO Max announced a Friends reunion, with the special originally slated to air in May of 2020, when the streaming service launched. Ben Winston signed on direct and executive produce, teaming up with Friends producers Marta Kauffman, Kevin S. Bright, and David Crane. Along with Schwimmer, all five actors from the original cast — Jennifer Aniston, Courteney Cox, Matt LeBlanc, and Matthew Perry — were expected to return for the television event.

Unfortunately, production on the Friends reunion was delayed due to the COVID-19 pandemic. But the cast has said they're looking forward to taping the reunion whenever it is safe to return to set. In fact, Schwimmer isn’t the only star to tease the TV event for fans, and in June, Kudrow and Aniston previewed the Friends reunion during an interview for Variety. Kudrow actually revealed that the cast doesn't "know everything about it" and are "meant to be surprised by some things as well.” The Friends reunion might not be bringing Ross, Rachel, Monica, Chandler, Phoebe, and Joey back to the small screen, but it sounds like it will be full of surprises.

More like this
'That '90s Show' Star Callie Haverda Got Advice From Mila Kunis & Ashton Kutcher
By Brad Witter
The Banned 'Friends' Ad Shows Monica As You’ve Never Seen Her Before
By Sam Ramsden
Here’s Why Danny Masterson’s Hyde Isn’t In 'That '90s Show'
By Brad Witter
Ashton Kutcher Wants Danny Masterson “To Be Found Innocent” In Rape Retrial
By Jake Viswanath
Get Even More From Bustle — Sign Up For The Newsletter
From hair trends to relationship advice, our daily newsletter has everything you need to sound like a person who’s on TikTok, even if you aren’t.