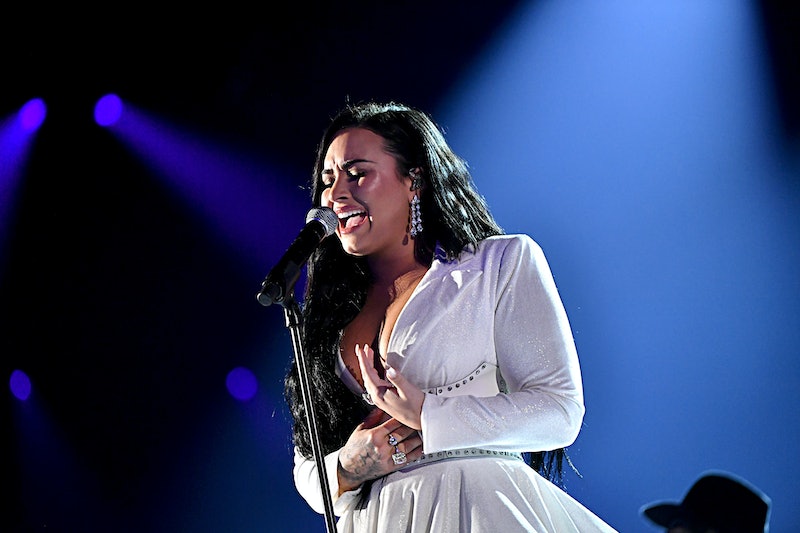 It's been less than a week since her split from fiancé Max Ehrich, but with "Still Have Me," Demi Lovato just dropped her most vulnerable breakup track yet. The singer's year has been a total rollercoaster, having gone from quarantining with the Young and the Restless actor amidst the COVID-19 pandemic, to getting engaged, to a tumultuous break-up all in the span of six months. However, the lyrics to her surprise new single, released on Wednesday, Sept. 30, proves that she's taking the chaos in stride.

Lovato gave fans short notice that she would be releasing new music on Tuesday night, tweeting, "Music is always there for me... song in the am." In classic Lovato fashion, "Still Have Me" is a piano ballad that allows her vocals to shine and the emotional lyrics to stand front and center. Though she doesn't reference her broken engagement explicitly in the track, she sings about attempting to heal in the face of devastation, opening the song by admitting that she's "a mess and still broken."

"Everything around me shattered / All the highs are now just lows / But it doesn't even matter /' Cause I'd rather be alone," she sings on the second verse. According to TMZ, Lovato wrote "Still Have Me" a while ago, but she reportedly changed the lyrics to reflect her break-up. Of course, fans can interpret the lyrics however they want to, but they definitely point to being a ballad about moving on from a heartbreaking split, especially considering recent events involving Ehrich.

Lovato and Ehrich's split was announced on Thursday, Sept. 24, with a source close to the singer confirming that they had ended their engagement. "It was a tough decision, but Demi and Max have decided to go their separate ways to focus on their respective careers," a source told PEOPLE. "They have respect and love for one another and will always cherish the time they spent together."

However, Ehrich's version of the story is much different. In a since-deleted series of Instagram Stories posted on Sept. 26, Ehrich said he found out about the break-up in the press. "Imagine finding out the status of your relationship through a tabloid," he wrote. The actor later added that he was filming "a biopic movie about a Pastor in a Christian Church whose intention of the film is to help people" when he found out. Lovato has not publicly commented on the split, but a source close to Lovato denied Ehrich's story to E! News.

Ehrich has only doubled down on his version of events. In since-deleted Instagram Stories posted over the weekend, Ehrich claimed that him and Lovato had still not spoken about the break-up, writing, "We haven't even officially ended anything to each other, literally." He then praised Lovato repeatedly, sharing screenshots of her old music and saying that he has "respected and loved Demetria since I was 15." However, on Monday, he seemed to reach some closure, writing that "one chapter finally closed this am" and he was ready to "turn the page." No matter what actually happened, both Lovato and Ehrich have made it clear that they're ready to start moving on.