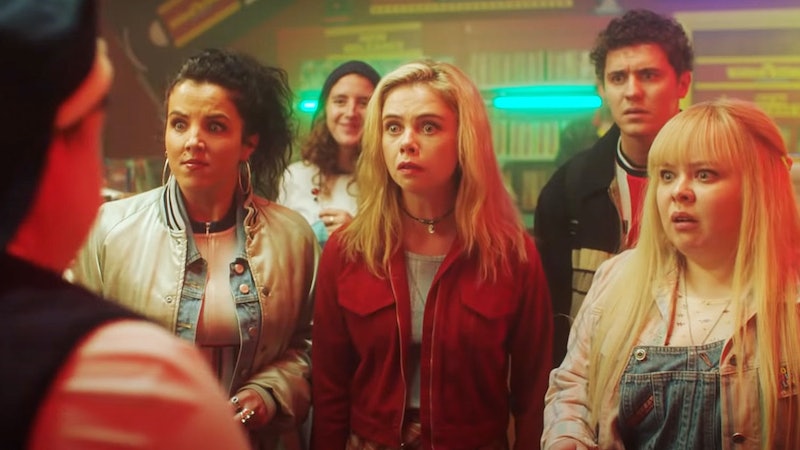 After the equally emotional and side-splitting Derry Girls finale, comedy fans were left bereft. The Northern Irish series, which followed the hapless adventures of teenager Erin Quinn and her friends, was set during the ‘90s and the final years of The Troubles. Throughout, their antics were often thwarted by the deadpan headteacher of their Catholic school, Sister Michael. So you can imagine how fans responded when some of Our Lady Immaculate College’s best known alums shared a mini reunion.

Bridgerton’s Nicola Coughlan, who played the series’ hilariously uptight voice of reason Clare Devlin, posted an Instagram picture of the gathering. Along with Coughlan’s collaborator Camilla Whitehill — with whom she co-wrote the comedy podcast Whistle Through The Shamrocks — the cute picture also featured two familiar faces from Derry Girls, back together again. Alongside Louisa Harland, who played Orla McCool, the group was also joined by Sister Michael actor Siobhán McSweeney, who looked fairly distrustful of the small dog seated on her lap as everybody else fawned over the puppy.

“It’s Valentina’s world and we’re all just living in it,” Coughlan captioned the image, referring to the dog. “Siobhán’s face is SCREAMING 'Is this my wake?'" commented one delighted fan, while others compared the scene to a Renaissance painting. It’s even more amusing given that McSweeney’s character is famous for her sarcastic, deadpan nature — and she would most likely have a very similar reaction to a small Pomeranian called Valentina using her as a sofa.

If you’re hoping the gang have got back together to plot the return of Derry Girls, however, you may have a while to wait. In May, the show’s writer and creator Lisa McGee told Bustle: “I love this world and I’d love to [return] at some point, but it’s just finding the right thing.” She added that she had, at that point, been too “knackered” to make a firm plan for the show’s future.

More like this
Adam Ali Hopes 'Waterloo Road' Will “Subvert” Queer Misconceptions
By Sam Ramsden
Yes, 'The Price Of Glee' Is Available To Watch In The UK
By Catharina Cheung
This First Look At 'The Gold' Shows Jack Lowden In A Whole New Light
By El Hunt and Sam Ramsden
This Pre-'Love Island' Video Of Olivia & Zara Together Changes Everything
By Bustle UK
Get The Very Best Of Bustle/UK
Sign up for Bustle UK's twice-weekly newsletter, featuring the latest must-watch TV, moving personal stories, and expert advice on the hottest viral buys.