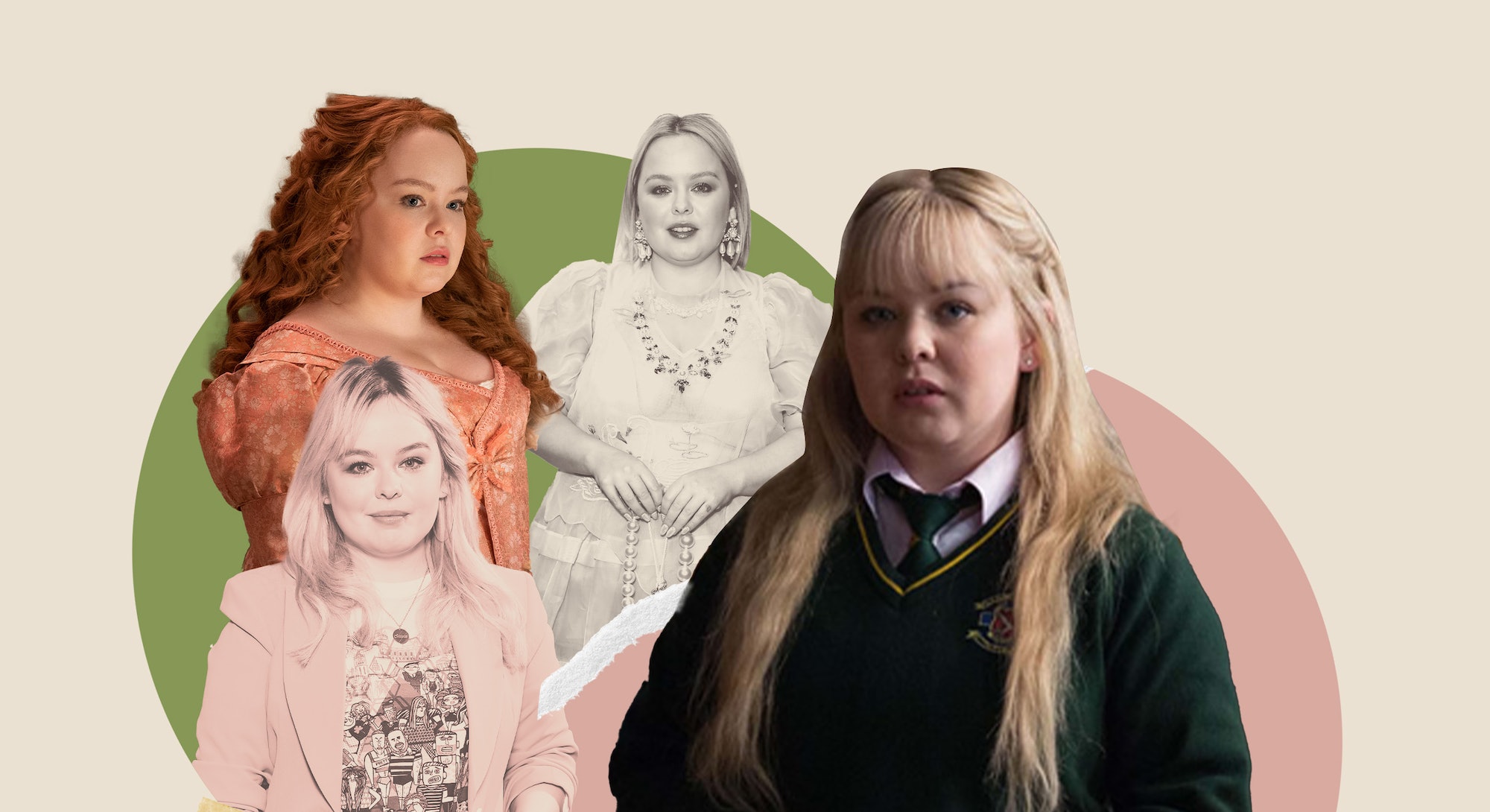 When Derry Girls premiered in January 2018, lead cast member Nicola Coughlan was desperate for it to be a success. The then 30-year-old needed the show to be her big break, and took an active role in trying to make that happen. Eager to boost the viewership numbers, she took to asking people to promote the series on social media. “The day before the premiere, I went to get my hair done, and I asked my hairdresser if she’d post on her Instagram that my show was coming out, so that some of her clients might watch it,” Coughlan tells me. “None of us were well known actors. There was no specific reason for me to think people would tune in, you know?” Little did the Irish actor know that the programme would soon change her life in every way imaginable, but more on that later.

Derry Girls went on to become Channel 4’s most successful comedy in over a decade, and is now a hit across the globe thanks to its second home on Netflix. Coughlan has earned high praise for her performance of the studious, but easily led astray, Clare Devlin. Alongside her co-stars Saoirse-Monica Jackson (Erin Quinn), Jamie-Lee O'Donnell (Michelle Mallon), Louisa Harland (Orla McCool), and Dylan Llewellyn (James Maguire), she’ll surely be missed when the show’s third and final series comes to an end. As fans have already noticed, Coughlan appears in fewer scenes during Derry Girls’ final run, as lockdown delays resulted in a filming clash between the comedy series and Netflix’s Bridgerton, where the actor portrays Lady Whistledown herself, aka Penelope Featherington. However, Coughlan made it home in time to give Clare the send-off she deserves.

The actor is quick to admit that she cried when reading the final script. “It’s definitely the most heart-wrenching storyline that has ever been on Derry Girls,” she reveals. Although the Galway-born starlet is saddened by the thought of retiring Clare, she’s very much at peace with show creator Lisa McGee’s decision to pull the plug. “It’s sad, but it’s bittersweet. You want to end on a high. You want to step out and say, ‘We did the best job we could do.’ And I think we have,” Coughlan remarks.

The beauty of Derry Girls is that it spotlights witty, relatable instances of teenage angst and hijinks against a backdrop of grave political unrest, and it does so seemingly effortlessly. The Troubles are a focal point throughout the ‘90s-based series, and in the show’s final run, the community is gearing up for the life-changing Good Friday Agreement of 1998. The gravity of revisiting this point in history has never gone unnoticed by Coughlan, who is only too aware that she was somewhat sheltered from the Troubles, having grown up in the Republic of Ireland. “I felt a level of pressure. I didn’t want to feel as though I was speaking for people from Northern Ireland,” she reveals. “I’m never going to have the level of understanding that someone from Derry is going to have. [Luckily] we have the script as the bible to always go back to.”

It’s definitely the most heart-wrenching storyline that has ever been on Derry Girls... It’s sad, but it’s bittersweet. You want to end on a high.

But Coughlan needn’t have worried, as Derry Girls continues to be embraced by locals. In fact, the show’s lead five characters have been immortalised in a larger-than-life mural painted on the side wall of a Derry pub. “It’s really wild,” the actor says proudly.

Coughlan, 35, experienced an added sense of responsibility when her character came out as gay at the end of season one, in a finale affectionately entitled “The Wee Lesbian.” When the episode first aired, same-sex marriage wasn’t yet legal in Northern Ireland. “I worried about it a lot,” Coughlan says of the coming out scene. “It’s a serious moment, but it had to be presented in a really comic way. You don’t want to have some schmaltzy thing, it would have felt really wrong.” The actor felt the pressure to make it work: “There was a feeling of, ‘If we don’t get this right. It’s going to look like we’re taking the p*ss out of an incredibly serious thing.’”

In an effort to educate herself further on the subject, Coughlan spent time with the Rainbow Project: a Northern Ireland-based LGBTQ+ charity. Looking back, the actor finds the scenes surrounding Clare’s coming out experience to be “so lovely and sweet.” And much to Coughlan’s delight, the storyline continues to have an impact on audiences far and wide. “People reach out to me all the time to say, ‘It’s so nice to see a character like Clare,” she reveals.

Derry Girls’ groundbreaking first season transformed Coughlan’s life, making her an instantly recognisable figure. But Coughlan soon came to realise that her newfound public status came with stresses of its own. “We were hideously ill-prepared,” Coughlan explains. “Fame is a very strange thing, and can be quite an isolating experience because it’s not something that most people can relate to. I mean, there’s definitely more good than bad. But it’s certainly a challenge.”

As such, the actor has had to change how she approaches social media. “In the beginning, I really loved interacting with people who were watching the show,” she recalls. “We were all on the same level, like kids in a classroom together, but the more well known you become, the more you become like a weird teacher, and people start treating you less and less like a real person. That’s hard to deal with.”

Fame is a very strange thing, and can be quite an isolating experience because it’s not something that most people can relate to. I mean, there’s definitely more good than bad. But it’s certainly a challenge.

Fame and social media, however, does have its perks, as Coughlan discovered when she got a message from a certain U.S. TV personality. “I woke up one morning [in 2021] and had a DM from Kim Kardashian,” Coughlan recalls excitedly. “I was like, ‘What is going on?’ So weird! We talked about Bridgerton.” As anyone who follows the Kardashian on Instagram will know, she’s a major fan of the Netflix period drama. The pair have kept in touch, with Coughlan reaching out to Kardashian last year to wish her luck ahead of her SNL hosting debut. “I messaged Kim to say, ‘You’re gonna do great!’ And she said, ‘Thanks, I’m really nervous,’” the actor explains. “I told her, ‘No, you’re gonna kill it.’” Praising the Skims founder, Coughlan adds: “She’s so nice. I’d heard that about her from lots of different people, and I can attest to it now.”

I note that it must be comforting to Coughlan that she can still make connections via direct messages on social media, given that she can no longer interact with her followers the way she used to before her profile skyrocketed. In agreement, Coughlan laughs: “Well, now I’m, like, best friends with Kim Kardashian.” The actor has indeed come a long way from the young woman who innocently asked her hairdresser to promote her new TV show.