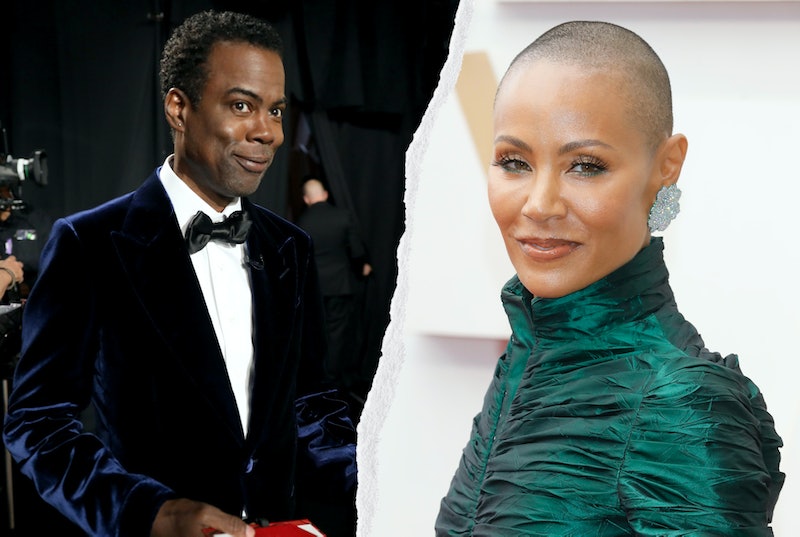 If you’ve been keeping up with all things Oscars Slap, you know that Will Smith apologized to Chris Rock on March 28, the day after the ceremony, for his “unacceptable and inexcusable” behavior. The slap happened after Rock compared Jada Pinkett Smith to G.I. Jane, referencing her close-shaved head — which, as Pinkett Smith has shared before, is a way of managing hair loss caused by alopecia.

Pinkett Smith was visibly annoyed with the comment right after it happened. So you may be wondering, has Rock apologized to her yet? As it turns out, Rock hasn’t actually responded to the situation at all since the Oscars. But according to an official statement from the Los Angeles Police Department, Rock declined to press charges against Smith. “If the involved party desires a police report at a later date, LAPD will be available to complete an investigative report."

This is not the first time he’s made unwelcome remarks about Pinkett Smith. In 2016, when Rock hosted the Oscars, he criticized the actor for boycotting the ceremony on behalf of diversity. She “wasn’t invited,” he claimed, suggesting Pinkett Smith was simply upset that Smith wasn’t nominated that year.

This year’s dig wasn’t even in the script. As ABC Executive Vice President of Unscripted and Alternative Entertainment Rob Mills told Variety, it was an ad-lib moment. “You started to realize this is real once Chris, who certainly knows the limits of broadcast standards, said, ‘Will Smith slapped the sh*t out of me,’” Mills told the outlet. “That’s when it became obvious that this was not a joke.”

Even given Rock’s history of aiming jokes at the Smiths, this particular attempt has viewers, including Bustle’s Jessica Morgan, calling out the misogynoir of the G.I. Jane comment — especially coming from “a Black man, who is acutely aware of the sensitivities around Black women and their hair.” In 2009, Rock himself made an entire documentary, Good Hair, about hair in the Black community, sparked by a question from his daughter: “Just yesterday, my daughter came into the house and said, ‘Daddy, how come I don’t have good hair? I wonder how she came up with that idea,” he said in the doc.

The lack of an apology isn’t preventing Pinkett Smith from moving on in her own way, though. On March 29, she took to Instagram to share a simple but poignant quote. “This is a season for healing and I’m here for it,” she wrote.