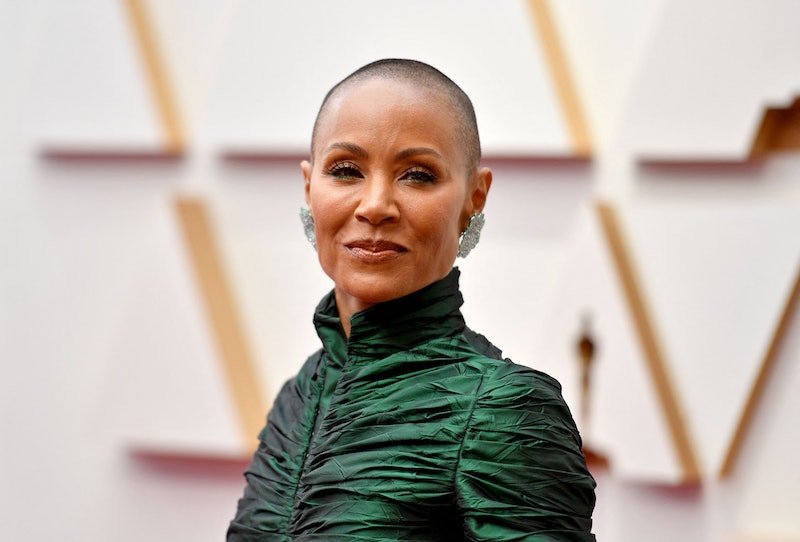 As Black women, how many times can you count when your hair has been the centre of a conversation? I’ll go first: too many times to recall. My hair, in all its curly and kinky glory, is often the first thing people point out when I walk into a room. “You’ve changed your hair again?” a white woman asked at an event I attended. “Your hair is looking a little scruffy today,” a colleague (not Bustle FYI) commented as I walked into a meeting. As Black women, we are tired of white people commenting on our hair as though they’ve never seen afro hair before in their lives. But what hurts even more is when a Black man, who is acutely aware of the sensitivities around Black women and their hair, chooses to centre and humiliate a Black woman’s hair on the world stage.

This is what happened at the 94th Academy Awards. While taking the stage to announce the Best Documentary Feature, comedian and actor Chris Rock directed one of his jokes at Jada Pinkett Smith, who sat in the audience, and her recently shaved head, which she revealed was the response of suffering from hair loss and alopecia.

“I love you, Jada,” he said. “G.I. Jane 2, can’t wait to see it!” The “joke”, which referenced Demi Moore’s iconic shaved head in the 1997 film received a laugh from the audience, while Pinkett-Smith looked visibly distressed. Moments later, Will Smith, her husband, stood up from his seat, calmly walked onto the stage, and slapped Chris Rock in the face. The audience audibly gasped, while Rock looked completely stunned. Smith then walked back to his seat and shouted from the audience: “Keep my wife’s name out of your f****** mouth!”

What was anticipated as one of the most exciting Oscars to date – the return of Beyoncé, and Ariana DeBose making history – was marred by Rock’s distasteful joke. While the internet was divided over the slap, with many condemning Smith’s “violence” and calling for him to hand back his Best Actor Oscar that he won 30 minutes after the slap, I couldn’t help but feel somewhat vindicated.

For years, Black women have had to experience emotional, physical, and mental abuse while others sit by and watch –and in many cases, stay silent. And while I don’t condone violence, Smith’s reaction was a valid one. Pinkett Smith has only recently began speaking out about her struggles with alopecia during her Red Table Talk show, sharing that the turban she frequently wears was an attempt to hide the fact that her hair was falling out. In December 2021, she made the decision to shave her head completely. It’s a traumatic experience that she described as leaving her “shaking with fear”.

In the UK alone, eight million women experience hair loss, and it can lead to a number of psychological problems, such as poor self-esteem and heightened self-consciousness. There are many illnesses that can trigger hair loss, including scalp ringworm, psoriasis, and eczema, while many treatments for illnesses can result in hair loss, including cancer treatment.

Smith’s slap was a reaction to a very poor action, and whether we believe he was wrong or right, his solidarity with Black women will not be forgotten.

In 2020, I lost my eyebrows due to stress and was diagnosed with alopecia of the eyebrows in late 2021. I spent months struggling with the fact that my eyebrows had fallen out at a rapid rate – so fast that I didn’t even notice until they were all gone. It severely impacted my mental health, as well as my self-esteem. For Chris Rock to use someone’s illness for cheap laughs is a low blow. For many women, hair is part of our identity and it contributes to a general sense of who we are. And it takes a lot of courage to face up to hair loss.

Rock’s joke was a reminder that no matter how far you have come, how hard you’ve tried to overcome hardship, how successful or beautiful you are, you are fair game if you are a Black woman. And that cuts deeply.

Smith’s slap was a reaction to a very poor action, and whether we believe he was wrong or right, his solidarity with Black women will not be forgotten. I hope that the slap will be a powerful symbol of standing up to misogynoir, microaggressions, and bullies.

More like this
TikTok’s New Beauty Hack Involves Drying Your Hair With A Pasta Strainer
By Catharina Cheung
Here’s Where The NHS Nurses’ Strike Currently Stands
By Sophie McEvoy
Gen Z Are Twice As Likely To Identify As Queer, According To New Data
By Sam Ramsden
Wavy Hair Girlies Rejoice, Rhyme & Reason’s Wave Revival Regime Is Here
By Darshita Goyal
Get The Very Best Of Bustle/UK
Sign up for Bustle UK's twice-weekly newsletter, featuring the latest must-watch TV, moving personal stories, and expert advice on the hottest viral buys.