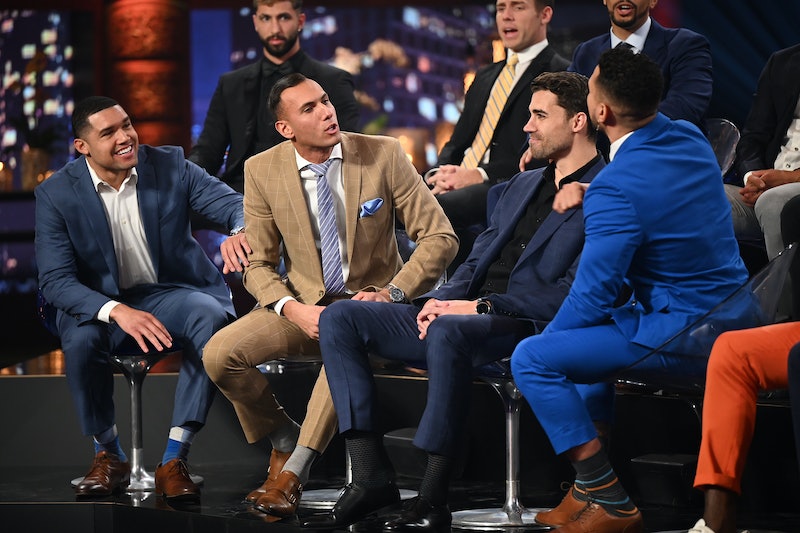 For a franchise that once popularized the phrase, “jumping the fence,” The Bachelorette may have just jumped the shark. Dec. 6 marks the airing of this season’s Men Tell All episode, and in lieu of the usual infighting and name-calling, audiences witnessed legal action... maybe. That’s right, pizzaprenuer Peter Izzo might’ve actually served his fellow contestant Will Urena with a subpoena live on stage.

Mess and drama are inherent to The Bachelorette. It’s in the DNA of the show, but somewhere along the way, this iteration of the Men Tell All turned into an episode of Law & Order. Fans who watched Michelle Young’s season can attest to how quickly Peter and Will butted heads. They couldn’t get through more than a handful of group dates before Will accused Peter of being a narcissist. From that moment forward, all bets, like the gloves, were off. For what little time both men had remaining on the show, they proceeded to lock horns in a continuous battle of barbs and yelling. Will constantly mocked Peter, and Peter went as far as to throw Will’s bomber jacket, a reward from Michelle, into a pool.

When the two confronted one another on Men Tell All, there was no intention of working things out. Peter accused Will of creating fake reviews of his pizzeria, and Will accused Peter’s sister of sliding in his DMs. The whole commotion was punctuated with someone walking on stage and serving Will with a subpoena for defamation of character.

Despite the theoretical ramifications of a lawsuit, neither men have commented much about the incident on social media. Both Will and Peter posted about Men Tell All, but neither man has addressed the subpoena. Peter posted a photo of himself on stage, captioned, “Staring at my tv until MEN TELL ALL TONIGHT only on America’s favorite network ABC,” while Will opted to show off his blue suit on Instagram with the caption, “We spilling tea 🍵, facing heartbreaks 💔 and finding inner peace 🙇🏽‍♂️.” Bustle reached out to ABC for comment on whether or not the papers were real legal documents.

As far as the actual efficacy of Peter’s alleged lawsuit, in order to sue for defamation, the plaintiff, in this case, Peter, would have to prove that someone made a false statement of purported “fact” about you. He would also have to prove the statement was published to a third party and that the person who made the statement did so negligently, recklessly, or intentionally. Finally, he would have to prove the statement resulted in his reputation being damaged. It’s unclear if Peter was suing over the reviews or Will’s comments on the show. Given that we can’t actually know if Will wrote all the negative reviews, it’d be hard to pin it on him. Not to mention, a review is an opinion (in this case, of pizza) and, therefore, not a fact. Peter may have a case somewhere if he tries to angle his claims around the idea of a damaged reputation, however, Peter is far from the first person to suffer from a bruised reputation after appearing on reality television.

Before things went sideways, audiences had strapped in for drama, so here are the best memes and tweets about Peter and Will’s drama:

Will continued his verbal attack on Peter and brought up Peter’s sister in the process.

The audience was then treated to a set of reviews of Peter’s pizzeria, suspiciously sounding as though they were written by someone with a vendetta.

The rest of the men didn’t seem to care much about Peter’s concerns.

Ultimately, Peter’s grand plan unveiled itself when someone served Will with a subpoena on stage. Peter ended his grand maneuver by stating, “Rest in pizza.”