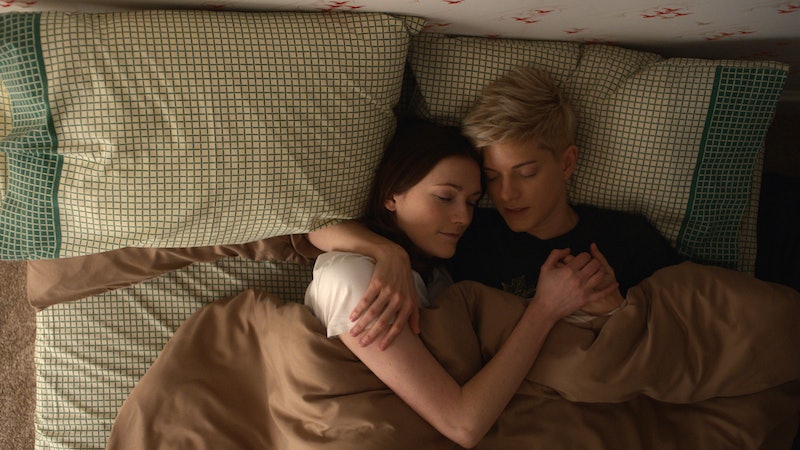 via the Netflix press site
By Zosha Millman
June 4, 2021

Feel Good ends with something that a season ago felt impossible: Mae (Mae Martin) and George (Charlotte Richie) not only together but on solid ground, both as a couple and personally. It’s a far cry from where they were at the end of Season 1, when their lives were imploding from a relapse, a fight, and a breakup.

Despite chemistry so strong that they moved in together almost immediately, it quickly became clear just how much the two were hiding from each other: George hid their relationship because she wasn’t out to her friends, while Mae hadn’t told George about her past with substance use. The problem was so extreme that Mae preferred to light her things on fire in a trash can rather than talk about what she was going through with George. Perhaps the saddest part was how game both of them seemed to support the other, if only given the chance. “Maybe I’d get it if you explained it,” George said of Mae’s history in Season 1, “but you don’t.”

While George and Mae’s struggles are specific to their situation, the barriers between them are universal. “We don’t give other people credit for the same interior complexity we take for granted in ourselves, the same capacity for holding contradictory feelings in balance, for complexly alloyed affections,” Tim Kreider wrote in a 2013 New York Times essay that gave the internet the phrase “mortifying ordeal of being known.” “The operative fallacy here is that we believe that unconditional love means not seeing anything negative about someone, when it really means pretty much the opposite: loving someone despite their infuriating flaws and essential absurdity.”

The belief that Mae and George owe each other a strength that they can’t muster within themselves is what leads to their first season breakup: by the time they’re ready to confront their issues, there’s too much strain between them, and they’re unable to cut through the noise of their own shame to find a resolution.

That budding openness to vulnerability, however, is what they finally build on together in the second season. Each faces the things holding them back — Mae by tilling her traumatic past and retreating home to Canada, and George by exploring and understanding her sexuality a little better. When the two find their way back to each other, they at first fall into a lot of the same habits — namely having tons of sex and ignoring any deeper issues. But the time they spent apart was illuminating, allowing them to sit with what they consider “undesirable” about themselves. Ultimately, they’re able see that they fit well together because of those things rather than in spite of them. Though Mae’s problems get bigger as she delves into the root of her PTSD and George’s get more abstract as she struggles to discern what she wants out of life, their relationship seems to be on better footing because they’re finally leaning on each other, not shutting one another out. Even the camerawork feels steadier.

As the couple sits on a dock at the end of the second season, it feels like they’re not only back together but together for good. Even if Mae still has to navigate how to move on from her trauma and substance abuse and George still needs to figure out what she wants from life, there’s a calmness that suggests they’ll be doing so together no matter what. In its final season, Feel Good doesn’t magically wave away their problems just for the pair to ride off into the sunset. Instead, it sets them up with something much more realistic and lasting.