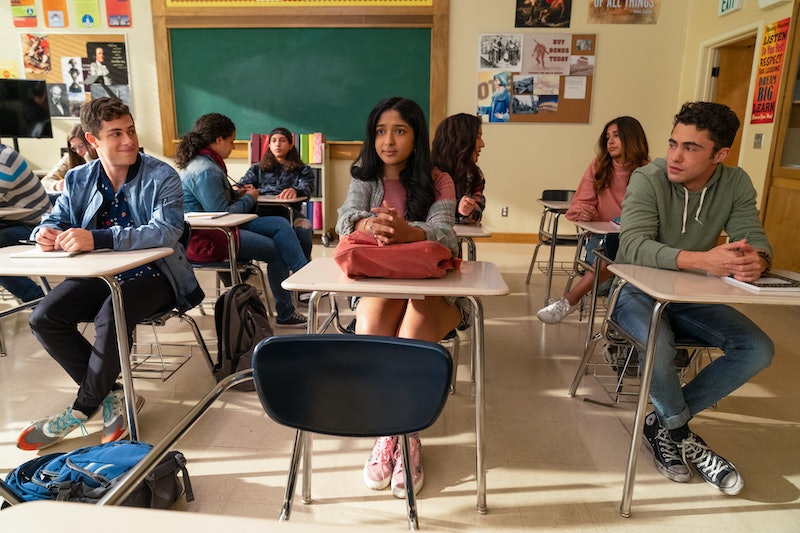 Spoilers ahead for Never Have I Ever Season 2. Devi Vishwakumar is pretty good at making a mess of her personal life. As she struggled to come to terms with her father’s death in Never Have I Ever Season 1, she at one point alienated her friends, her mom, her crush, and her other crush. In Season 2, she commits one of her biggest faux pas yet: dating two boys at the same time and lying about it.

When both star swimmer Paxton (Darren Barnet) and her brainy classmate Ben (Jaren Lewinson) express interest in her, Devi is so excited that two people like her that she doesn’t want to choose between them. She compartmentalizes each relationship at school, but it all very quickly (and predictably) blows up in her face when she throws a house party that guys both attend. With the secret out, Devi has to spend the first half of the season learning from her mistakes and respecting that both Ben and Paxton are understandably angry at her.

"Last season Devi definitely was your messy best friend," Maitreyi Ramakrishnan, who plays Devi, told Entertainment Weekly in a recent interview. "This season, when she messes up, you can tell she actually understands that there are consequences to her actions. She's still messing up, but she's maturing and she does want to do the right thing and she doesn't want to hurt people."

It’s not long before both boys are back in Devi’s life in some capacity, and she does her best to try to support them. When she thinks Ben might be flirting with the new girl Aneesa (Megan Suri), she initially tries to sabotage their relationship by preventing them from spending time together, even going as far as to (unintentionally) spread a rumor about Aneesa. But once Devi owns up to her mistake and apologizes to Aneesa, she gives Aneesa her blessing to start dating Ben — a development she is far from enthusiastic about, but acknowledges it’s not her place to intervene in.

Devi’s relationship with Paxton is more antagonistic. After finding out that Devi was cheating on him, Paxton runs out of her house party and gets hit by a car, messing up his arm and potentially ruining his chances at a swim scholarship for college. With his future hanging in the balance, Paxton decides it’s time to buckle down and get serious about school, first by having Devi do all of his homework and later by having her tutor him. Their study buddy relationship has its ups and downs, but Devi’s advice to put the same effort into school as Paxton did into swimming eventually pushes him to excel, and even get in touch with his Japanese heritage.

That engenders enough goodwill for Paxton to start hooking up with her again. But to Devi’s dismay, he insists on keeping it a secret; he’s still hurt and worried about how it will look if he starts dating the girl who cheated on him and ruined his swimming career. Devi is upset, but agrees to the terms. However, with a little coaching (and even flirtation?) from Ben, she decides to tell Paxton that she’s “not going to settle for some weird secret thing behind closed doors.” The two break up, and Devi heads to the winter dance for a night with her friend Eleanor.

That is, until Paxton shows up and says he’s ready to be official and public. This leaves Ben — who went to the dance with Aneesa — jealous, especially after learning that Devi wanted to choose him over Paxton before he started dating Aneesa.

As Season 2 closes, Devi and Paxton share a kiss, seemingly cementing their relationship. But don’t count out Ben just yet: Never Have I Ever co-creator Lang Fisher told Entertainment Weekly that the writer’s room is “completely split in half” about whether Devi should be with Ben or Paxton and has “debates constantly” about who she’ll end up with.

Ramakrishnan, on the other hand, is clear on her allegiance: “Team Devi; self-love. I’m going to keep riding this train to the end.”