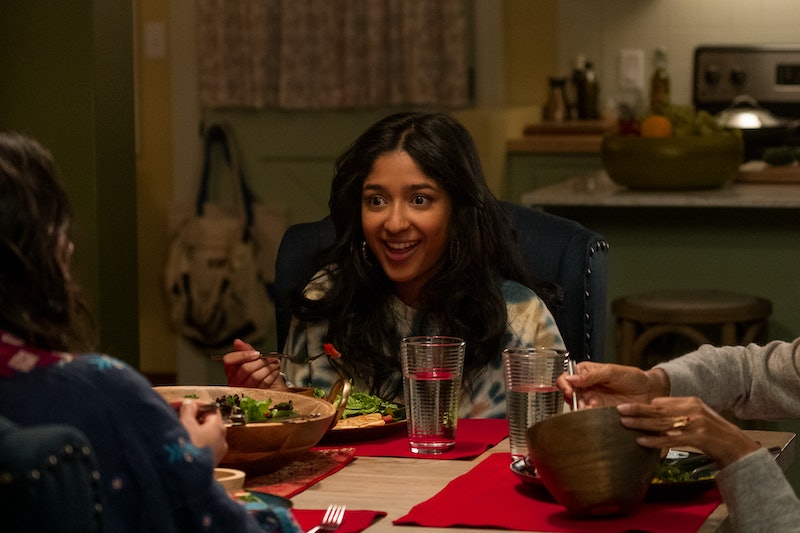 Light spoilers ahead for Season 2 of Never Have I Ever. In the first season of Never Have I Ever, 15-year-old Devi Vishwakumar is preoccupied with getting boys — specifically the hottest boy in school — to like her. The high schooler swims somewhere in the middle of a punishing social hierarchy: she’s not having lunch alone, but the popular kids can’t remember her name. Which is to say that while her moods take ginormous swings, they only affect the handful of people she’s closest to: her mom, her cousin, her two best friends. In Season 2, that changes. Devi finally gets guys’ attention. She makes new friends. And the impact zone for her turbulent emotions grows.

When we first meet Devi, played with unflagging vitality by Maitreyi Ramakrishnan, she’s just recovered from months of grief-induced paralysis that started after her father’s sudden death. She knows the devastating power of her feelings, at least insofar as they affect her. Since then, though, Devi’s problems have mostly been of her own making; she’s selfish, entitled, and rash, leading her to hurt the people who love her most. By the end of Season 1, she learns to apologize and repair rifts with her family and friends, but it’s always reactive. She still has no strategies for turning off the firehose of her emotions, no mitigating force between how she feels and how she behaves.

In Season 2, Devi tries listening to a recording of her father’s voice in an attempt to calm herself down at times of heightened emotion, but recklessness still gets the best of her. She gossips about a new student when she’s jealous. When she suspects her mom is dating someone, she stalks her. For Devi, emotions demand action. Narrator John McEnroe sums it perfectly at the end of the season premiere, as Devi opts to date two boys simply because she’s excited that two boys like her: “It was a way out of her predicament that required no introspection or mature decision-making — two things Devi hated.”

McEnroe, of course, is one of the most impetuous figures in sports, and he serves as a reminder that Devi doesn’t behave how she behaves because she’s “just a kid” — plenty of adults behave the same way too. But Never Have I Ever sometimes feels reminiscent of shows intended for even younger audiences than its teen characters. There’s not necessarily a moral takeaway at the end of each episode, but there are lessons embedded throughout, usually about self-awareness or humility or respecting others. When Devi’s antics inevitably catch up to her — the new girl learns it was Devi who started the rumors about her, her mother catches her spying, the two boyfriends discover each other’s existence in the most publicly embarrassing way possible — the show models what it looks like to ask for forgiveness and to ask for help. Devi doesn’t just magically resolve her problems on her own; she goes to a therapist. Devi has breakthroughs and then, just like a real person, she makes the same mistakes again.

What sets Never Have I Ever apart from so many young adult series is that the protagonist has such a fully developed idea of herself. Devi knows she’s smart, ambitious, and outrageous — a McEnroe-caliber hothead who throws textbooks through closed windows, but deep down appreciates the difference between right and wrong. Never Have I Ever is not another show about a teenage girl figuring out who she is; it’s about a teenage girl discovering how much she already impacts the world. In Never Have I Ever’s most affecting moments, Devi doesn’t change in any meaningful way. She still feels things deeply. She just slows down enough to realize how powerful she is.