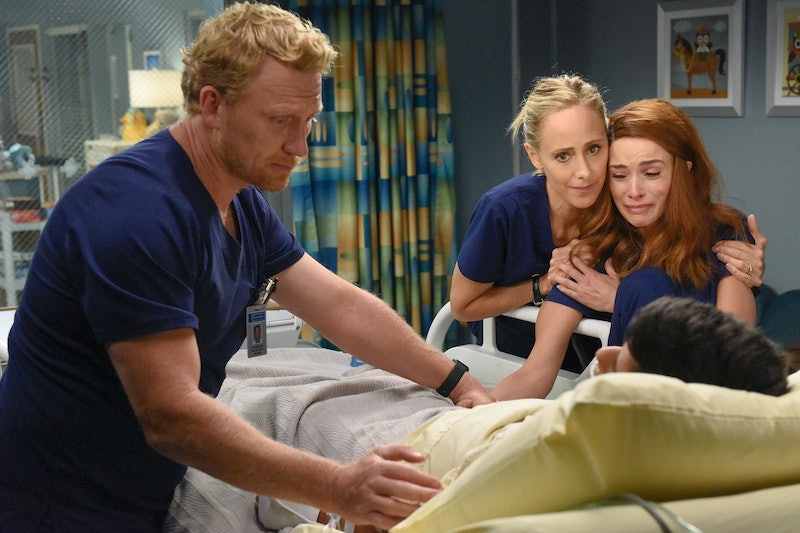 Spoilers ahead for Grey’s Anatomy Season 18, Episode 8. The Grey’s Anatomy winter finale ended on a cliffhanger — literally — that has fans concerned Owen might die. Promos had warned that the Dec. 16 episode would leave viewers “on the edge,” but in the end, it was Owen, Teddy, and Hayes who were teetering between life and death following a car accident. To add to the drama, the trio was delivering Owen’s nephew Farouk’s donor heart back to Grey Sloan when the transport driver suffered a medical event and swerved off the road, with only a tree stopping the vehicle from tumbling over a cliff.

Deciding Teddy had the best chance to escape, Owen convinced her to get Farouk’s donor heart to the hospital while he and Hayes waited for a rescue team. Apparently it was all a ruse though, because as soon as Teddy was safely away from the scene (heart in hand), Owen asked Hayes to tell her, Megan, his kids, and his mom that he loves them. “No child deserves to grow up without a parent,” Owen said, instructing the widower and father of two to climb out of the car window and save himself. “Think of your kids, Hayes, please.”

Owen added that he would still have a few seconds to survive the fall once the car tipped, but in the event he did not, he had another surprising request for his colleague. After explaining that he gave ailing military vet Noah the drugs he needed to die, he asked Hayes to do the same for three terminal soldiers to whom he’d already promised the same drugs, which he’d hidden in his glove compartment. In the episode’s final seconds, Hayes escaped, but Owen remained in the passenger seat as the SUV plummeted over the 100-foot cliff’s edge.

Since Grey’s returns from its midseason break on Feb. 24 — 10 whole weeks from now— fans will have plenty of time to agonize over what happened to Owen. Not everyone is so convinced that he’ll ultimately meet his demise though, and Season 18’s ninth episode, which is titled “No Time to Die,” will return with the Station 19 firefighters attempting a rescue mission. Though Sullivan radios that there’s a “civilian down, no pulse,” there’s a good chance he could be referring to the anonymous organ transport driver who’d been largely ignored in all the commotion.

Another sign Owen could survive? Actor Kevin McKidd, who’s played the character since Season 5, re-signed a three-year contract in July 2020, per Deadline. That’s not to say it means anything definitive though: Patrick Dempsey was only halfway into a two-year contract extension when Derek died during Season 11, for example.

Before the episode aired, Camilla Luddington, who plays Jo, was tight-lipped on whether or not someone would die in the midseason finale, though she emphasized that the “massive, crazy accident” would be significant. “We’re worried every episode, we also get worried,” she explained on E!’s Daily Pop of the cast’s reaction to potential character deaths. “You’ll have to wait and see. It’s a massive, massive accident, and, um, yeah.”

Now that Link also spotted Amelia and Kai kissing in the episode, Jo’s chances of seeing her love life be less of a “car wreck” may have just shot up, too. “She just suddenly feels something,” Luddington added of Jo and Link’s friendship turning romantic. “And it feels important, so it’s messy, which we love to do.”

You’ll have to wait until February to find out what happens though.