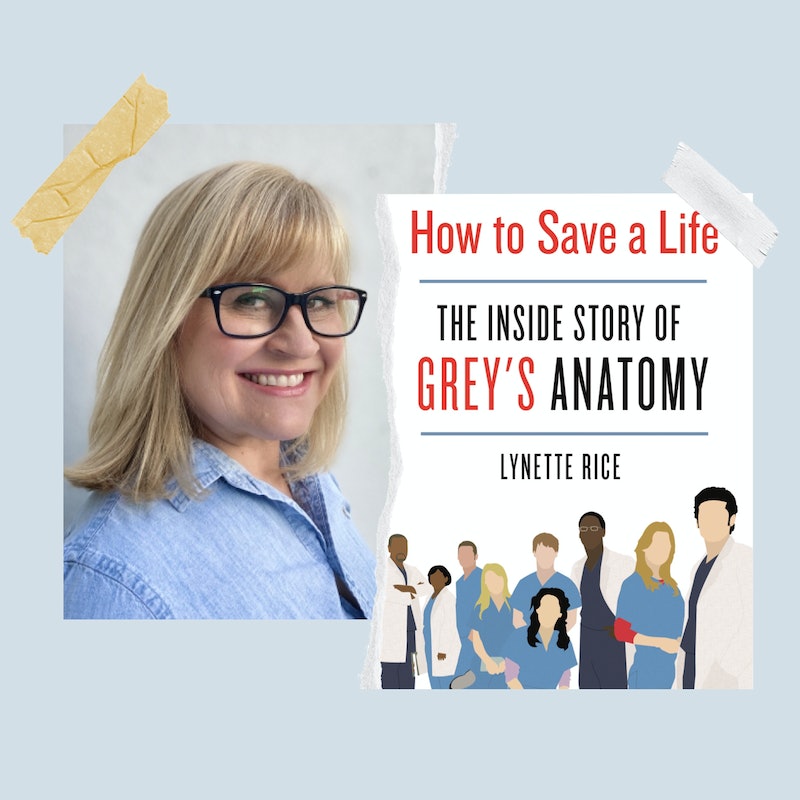 When Patrick Dempsey hung up his Grey’s Anatomy scrubs in 2015, no one knew what to think. The 10-year Grey’s veteran was the show’s main heartthrob, and only halfway into a two-year contract extension. Entertainment Weekly editor-at-large Lynette Rice was the only journalist to secure an exit interview, but even she didn’t feel she’d gotten answers. Dempsey told her that final scenes as Dr. Derek “McDreamy” Shepherd felt like “just another workday,” absent of tears or even a goodbye party. His abrupt departure, he professed, “just sort of unfolded in a very organic way.”

“When I interviewed him back then, I knew I wasn’t hearing the whole story,” Rice tells Bustle. She’d heard whispers about a larger scandal, but not enough to publish anything definitive — until now. After interviewing more than 80 current and former cast and crew members for her new book, How to Save a Life: The Inside Story of Grey’s Anatomy, Rice solved the mystery.

Behind the scenes, Dempsey reportedly began throwing “diva-like fits” over his work schedule, something that caused tension with Ellen Pompeo, who played his onscreen wife, Meredith Grey. In Rice’s book, executive producer James D. Parriott also says that Dempsey had been “terrorizing the set” and causing “HR issues” (though not ones that were “sexual in any way”). He further explained that Dempsey and series creator Shonda Rhimes, who ultimately issued the network a “him or me” ultimatum over the actor, had been “at each other’s throats.”

But the truth behind Dempsey’s departure wasn’t the only secret haunting the halls of Grey Sloan Memorial Hospital. Below, Rice shares more behind-the-scenes intrigue, including when she thinks Grey’s will end — and if Sandra Oh will return when it does.

The 2007 fight between Isaiah Washington and Patrick Dempsey, which led to the former’s firing, felt like the first major Grey’s drama to leak to the press. Although Isaiah used a homophobic slur during the altercation — and then repeated it at the Golden Globes — one of your sources insisted that Isaiah isn’t homophobic at all. Did demonizing news reports leave something out?

What Isaiah said was absolutely unforgivable. For them to get into this fight, Isaiah had to be so enraged to choose to drop this slur. But he apologized for it and shot a PSA for ABC, so why did he repeat the same slur at the Globes? There was anger brewing there, and think people today still grasp for an answer of why he did that. Why did he self-sabotage that way? But once he repeated it in the press room at the Globes, ABC had to let him go.

What made it so tragic is that he epitomized what Shonda wanted from the show. He was a brilliant actor who played this brilliant compelling character who happened to have the most amazing chemistry with Sandra Oh. They were wonderful together, and she had to bring that to a screeching halt because of what he did. What's even more tragic is how long he paid for it. His career never really recovered. He became a very conservative voice on Twitter and would often tweet these conspiracy theories, especially during the Trump years, and all I could think was maybe on some level, he started to feel he became a disenfranchised member of Hollywood, so he decided to join the disenfranchised segment of society. I couldn't understand why he went so off the deep end.

In the chapter you devote to Dempsey’s ouster, James D. Parriott described “HR issues,” saying that he was “terrorizing the set.” What eventually led Shonda Rhimes to issue the network the ultimatum described in your book?

When you have a bunch of your women complaining about his behavior, you’ve got to listen to them. Somebody like Ellen [Pompeo], who puts in such long hours, doesn't need to hear a man complaining about being on the set all day and that he just wants to go off and race cars. She’s number one on the call sheet, but he recognized his power over the set. He projected his unhappiness onto the set, and it sounds like it made life untenable for so many people.

What was extraordinary — even at the eleventh hour when they knew something had to give, there were still discussions about figuring out a way to retain Patrick so that the network could still have McDreamy, because the bigger issue was wondering if the show could survive without Patrick Dempsey. They considered an alternative where maybe McDreamy lives in another state, but nothing about it sounded organic. The point all along for Shonda was to make this character the perfect man, the guy we at home wanted to marry. It didn’t feel organic to have Meredith and Derek be apart, be divorced, [have] things fall apart. The only solution is to kill the dude off, and as heartbreaking as that is, it ended up being a great dramatic turn and set up a whole new chapter for the show.

Fans were so upset that they threatened to stop watching the show following Derek’s death. How did Dempsey’s departure shape where the show stands today?

The network had a real fear about moving forward. I think that Ellen was certainly excited about the potential of it really being her show. It really was hers all along, but he took such a big front seat position for the longest time. There was a real intent there with her and other women, like Debbie Allen, to change the culture on that show. Ellen gave Variety a really telling interview a couple of years ago where she admitted that the first ten years were a disaster behind the scenes. In addition to being excited about the new direction for her character, I also think she was looking to make it a better place to work, a more humane place to work. And I think she's achieved that with Debbie Allen.

What did you make of Dempsey’s return in Season 17?

I have to believe that there was some sort of come-to-Jesus discussion between Patrick and Ellen. She pretty much alluded to that in some interviews, that she called up Patrick and said, “Let’s have a talk.” Even if she had harbored any outstanding issues with what kind of dude he was to work with, Ellen is such a savvy businesswoman, and she knew that his reappearance would be huge for the show. And of course she was right. Look at all the great press they got off the bat. I think they definitely spent some time with one another, and he obviously was so happy to be back on the show. He looked it.

Another cast member who had an unceremonious exit was Katherine Heigl: She was labeled “difficult” on set, and she and Rhimes had a very public falling out after the actor removed her name from Emmy contention, citing the lackluster material she’d been given. Do you think either Heigl or Washington’s situation would be handled the same way in 2021?

In the post #MeToo and post Black Lives Matter world, I think Isaiah would still be canned. I don’t say the same about Katherine Heigl. Think about all the negative headlines that we heard about her being a diva and ungrateful, and other sexist things like that. I don't think the same thing would happen to her.

The great thing about Grey’s Anatomy is that it did what television should do, and that's create overnight stars. With the exception of Patrick Dempsey, [cast members] weren’t well known people. There's no class offered at a studio on how to behave when you all of a sudden become the next hot thing and your life is under constant scrutiny.

Fans still don’t know the full story of Justin Chambers’ exit. Did you get any insight into what really happened?

I definitely heard a few stories, but I couldn’t confirm them for the book. No matter what, this was another departure from the show that seemed clouded in mystery, which has become par for the course. I know that fans were very disappointed by the way it wrapped up. People who are invested in that show totally believed in the relationship between Karev and Jo. No one would have believed that Karev would leave Jo for Izzie. But if they needed to look for a very quick departure for him, what made the most sense was to have him go back to Izzie. The way that Sandra left, and even the way Patrick left, felt more real and organic to the story, but that one didn’t. I think that’s definitely a ding against the show, but I feel like [showrunner] Krista Vernoff’s hand was forced on that one.

Fans have long been clamoring for Sandra Oh’s return as Cristina Yang. In your book, you quote Oh saying she’d like to be invited back for the series finale, but she’s said otherwise in recent interviews. Which do you believe?

Who should fans not expect to see return?

I would be most shocked if Katherine Heigl came back, but I would feel most great about the universe if they figured out a way to have her back. When they were preparing for Justin’s abrupt departure, Katherine gave an interview somewhere saying that there had been some brief talks about her coming back, but it didn't work out. I wish they could work it out and have her come back. I think fans would be so giddy about that.

When do you suspect Grey’s will end its impressive run?

I think the show will finally end this year, but I don’t think that the franchise will go away. Going into this season, they already had a spinoff in the works, and I think even with that spinoff, they'll figure out some way to have Ellen appear now and then, just to help get it off the ground. But with all these people coming back, like Kate Walsh, you can’t look at all this and not think, “Come on, they’ve got to be coming to an end.” Why do you go to such lengths? They have to be getting ready for the big goodbye.