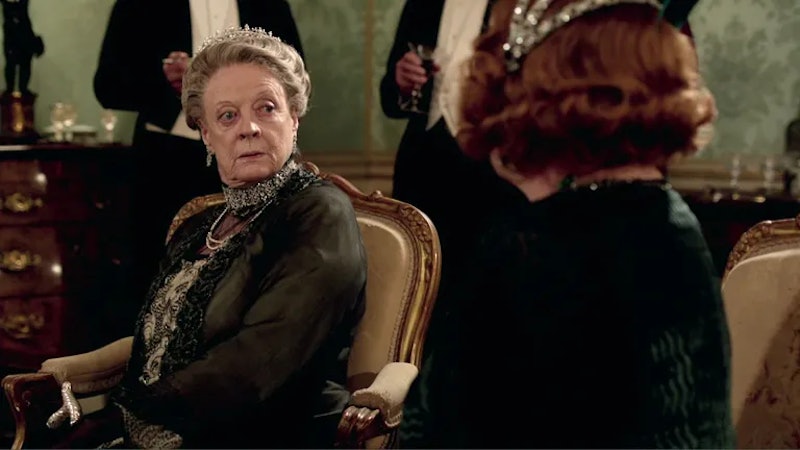 Cementing her legendary status with a career spanning seven decades and little sign of her acting career ending just yet, Dame Maggie Smith is unstoppable on both the small and big screen. Starring in Downton Abbey: A New Era, a second spin-off of the Downton Abbey series, the actor has continued to play the fierce and shrewd Dowager Countess, Lady Violet Crawley. She may be the elderly matriarch of the Crawley family, but how old is Maggie Smith in real life, and will she be retiring soon?

Born Dec. 28, 1934, Dame Smith is 87 years old. Over the last 70 years she’s covered all bases of the acting world: winning Tony Awards for her theatre work, Primetime Emmy awards, BAFTAs, and Golden Globes, and two Academy Awards. (Nominated six times, and taking home the best actress and best supporting actress statues for her roles in The Prime of Miss Jean Brodie and California Suite in 1969 and 1978 respectively, thank you very much.)

Long before she ever took on the role of Professor McGonagall in the Harry Potter films, Smith’s career begun on the stage. At the age of 17, she starred in Shakespeare’s Twelfth Night at the Oxford Playhouse. Despite being diagnosed with breast cancer at 73, the actress is still going strong and shows no signs of retiring or stopping any time soon.

Much like her beloved Downton character, Dame Smith is regarded for her sly wit and sense of humour. Dominic West told Metro that she had told him the new Downton Abbey film was going to be her last job. “I was in the scene that she shot last in the show and I thought, ‘Oh my god, I’m witnessing history here’ and it was incredibly emotional,” he told the paper. “And then I went back the following week, and I said: ‘It’s so sad Maggie’ and she said: ‘Nonsense!’ and she’s booked another film. She starts next week.” (She will star in the on-screen adaptation of Christopher Hampton’s play, A German Life, per Variety.)

If the plot of Downton Abbey: A New Era is anything to go by though, this will be her final appearance as Lady Violet. Sob.

More like this
'Doctor Who’s New Star Is Already Huge On TikTok
By Maxine Harrison
Drag Queen Drama 'Femme' Is A Fresh Take On The Classic Revenge Thriller
By Sam Ramsden
Are Tom Daley & Louis Theroux Bound For 'Strictly'?
By El Hunt
'Love Island' Bosses Are Considering An All-Star Season
By El Hunt
Get The Very Best Of Bustle/UK