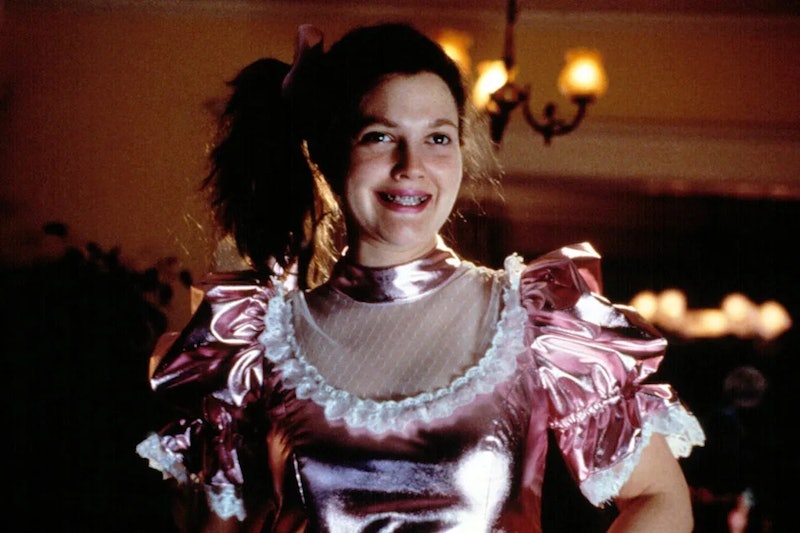 If you’re wondering what Josie Grossie from Never Been Kissed is up to now, she’s on TikTok like every other teenager. On Sunday, Aug. 29, Drew Barrymore made her debut on the video-sharing app and brought back the iconic character — complete with her puffy pink dress, side ponytail, and braces — to answer some burning questions for a challenge called “Questions I Get Asked All The Time.” She also paired the clip with some dance moves, but in true Josie Grossie fashion, she struggled to find the beat.

When asked if she wears her pink prom dress every day, Josie responded that she only wears the frock on special occasions. And after revealing that her favorite food is “NOT. EGGS,” she answered the question we’ve all been desperately trying to figure out since the rom-com’s release in 1999: “Are you Drew Barrymore?” “I’m Josie Geller,” she responded, finally setting the record straight. “But people do say we look alike!”

Of course, longtime fans of the hit ‘90s rom-com were freaking out over Barrymore’s debut in the comments. “This could not be a more iconic entrance on TikTok,” TikTok user @lemontattoos wrote. Several others were shocked to see that Josie looked the exact same as she did over 20 years ago. “It blows my mind how this girl just does not age,” someone wrote. “This is everything I didn’t know I needed,” another fan added.

This isn’t the first time Barrymore recreated the beloved character. In November 2020, the Blended star “invited” Josie to be a guest on The Drew Barrymore Show. During the episode, the two reported on everything from the presidential election to football. And since 21 years had gone by since the movie came out, Josie had a lot of catching up to do. “I have a very special co-pilot today,” Barrymore said at the start of the episode. “She’s a high school senior and future journalist. It's Josie Geller!”

Josie appeared onstage in her iconic prom dress; the same one from her latest TikTok. “It’s TV,” she said, “and it’s the fanciest thing I own.” Unfortunately, her knowledge of current events was even more outdated than her outfit. “First up, the story everyone is talking about: Who will be the next president of the United States?” Barrymore asked. And when Josie revealed that she thought George Bush and Michael Dukakis were the candidates, Barrymore broke the news. “Oh Josie, you’ve missed so much,” she said. “A lot has happened since 1988.”

She was right; a lot has changed since 1988, and Josie had no idea about the COVID-19 pandemic or Harry Styles. “Can you at least tell me in this future world if no other girls get pranked by the popular boy in high school who throws an egg out of the sunroof of his limo?” she pleaded. Of course, bullying still happens, but thanks to Josie, high schoolers have someone to relate to. “A lot of people see themselves in you,” Barrymore said before inviting Josie to dance her way into a commercial break. “We can all get in touch with our inner Josies.”