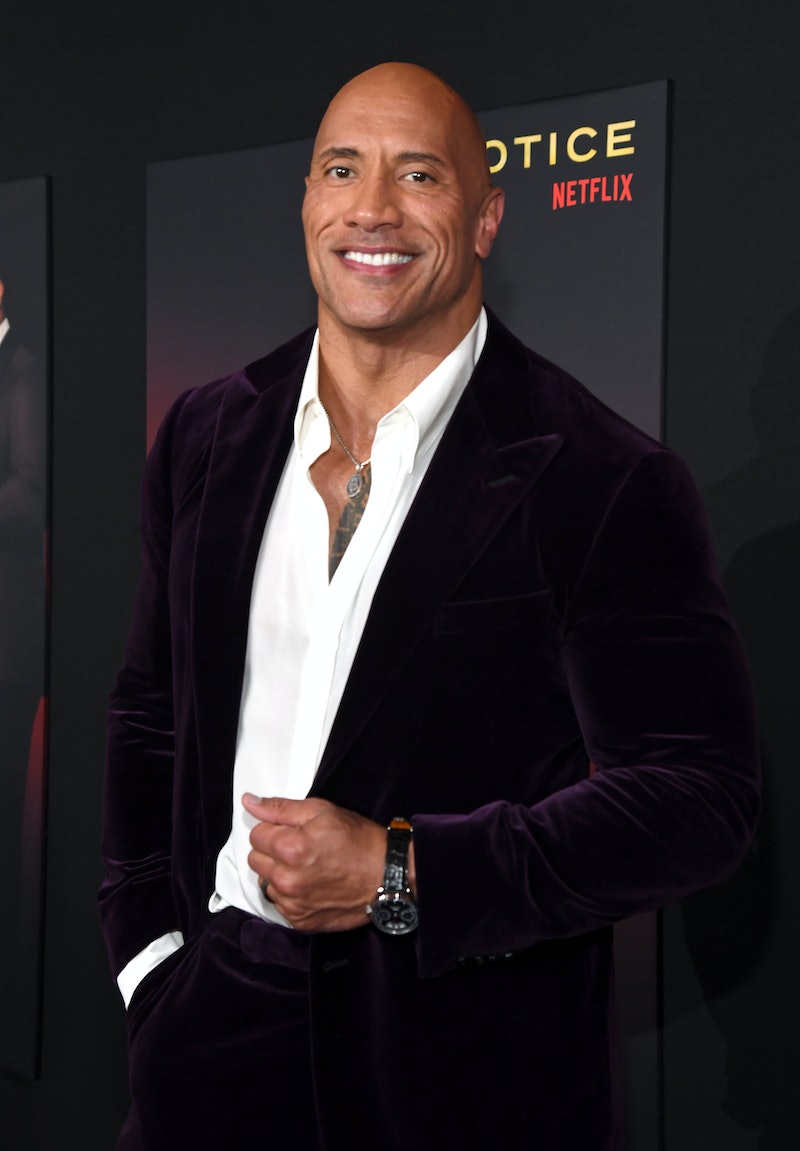 The Rock may have a “big ass dinosaur head,” in his own words, but he doesn’t seem to have the outsized ego to match. While celebrating the Nov. 3 premiere of his new Netflix film, Red Notice, on Instagram on Saturday, Nov. 6, Dwayne Johnson gamely poked fun at himself. The actor’s caption praised his co-stars Gal Gadot and Ryan Reynolds, and then reminded everyone of his infamous (and amazing) fanny pack photo.

“Two of the biggest movie stars in the world,” Johnson wrote alongside a photo of himself on the red carpet with his fellow Red Notice stars. “And a guy who’s famous for wearing a fanny pack.”

Said fanny pack is, of course, not the reason the pro wrestler-turned-actor gained fame, but it is always worth remembering. His outfit featuring the accessory became a pop culture sensation when Johnson shared a ’90s throwback photo of himself in July 2014. In it, he poses in a stairwell, wearing a black turtleneck tucked into belted jeans, a silver chain around his neck, and, yes, a black fanny pack. The look was so iconic that Saturday Night Live even had him recreate it when he hosted the late-night sketch comedy show in May 2017.

When Johnson posted the original picture in 2014, it immediately delighted many of his fans. Even all these years later, the Instagram post continues to get comments. “Omg this is priceless,” one person wrote in 2016, two years after the star first shared it.

The appreciation has moved well beyond social media. Johnson’s ’90s outfit is even a popular Halloween costume these days — one that the likes of Kevin Hart has worn. The comedian spoofed his Jumanji co-star in 2019 with impressive attention to detail, even putting a napkin under his arm like Johnson did in the OG photo. He noted in the caption that he’d made himself laugh with it and included the hashtag #NailedIt.

As for Johnson’s fame, it’s been helped more by his movie roles than his fanny pack. He’s starred in the Fast and Furious and Jumanji franchises, plus in hits like San Andreas, Moana, and Baywatch. His latest film, Red Notice, debuted on Netflix on Nov. 5 and sees him as a top FBI profiler alongside Gadot and Reynolds’ criminal characters. It’s the streamer’s biggest film to date, as Johnson noted in another Instagram post about the premiere, saying it was “held in honor of the biggest (and most fun;) movie in the history of NETFLIX.”

Unfortunately, the fanny pack itself didn’t make it to the red carpet. Johnson wore a much-less-memeable “deep amethyst velvet number,” he wrote, because “every girl’s crazy ’bout a sharp dressed man.”

More like this
The 'Love, Lizzo' Harry Styles Scene Is Just 1 Moment That Made Fans Feel Seen
By Brad Witter
Watch The Gripping First Trailer For The 'Harry & Meghan' Netflix Doc
By Jake Viswanath
The First Trailer For 'That '90s Show' Includes So Many Nods To The Original Series
By Jack Irvin, Alyssa Lapid and Grace Wehniainen
Elizabeth Debicki On Her Approach To The Most Debated Scene From 'The Crown'
By Grace Wehniainen
Get Even More From Bustle — Sign Up For The Newsletter