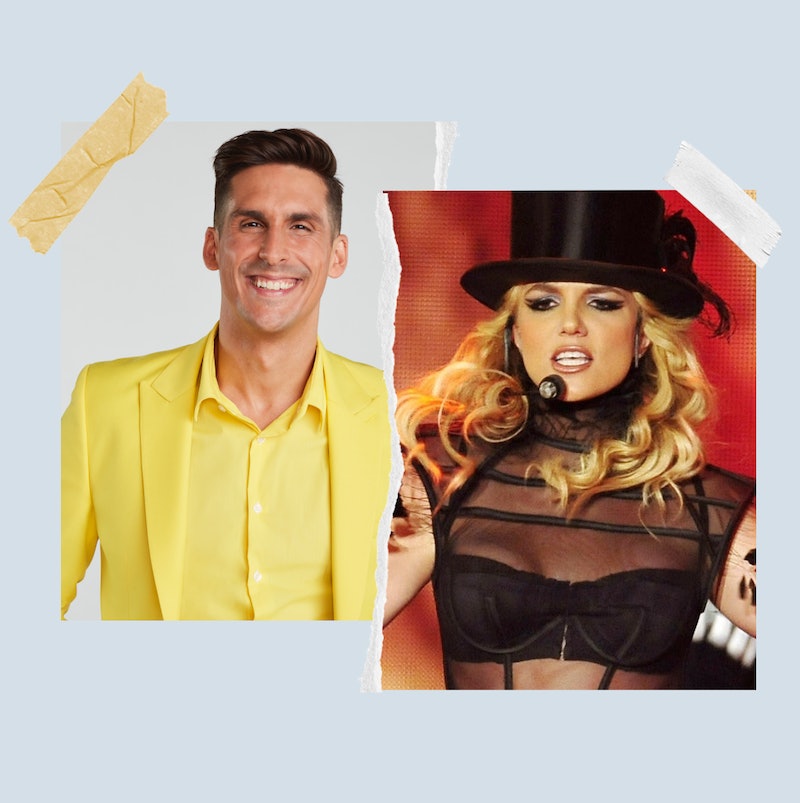 The third week of Dancing With the Stars Season 30 may end up being the best week — because it was Britney Spears Week. On the Oct. 4 episode, the celeb contestants and their professional partners danced to the music of the Princess of Pop. While some viewers were a bit peeved that the show used cover versions of Spears’ hits rather than the original gems, others were too distracted by the stunning routines on display — especially Cody Rigsby and Cheryl Burke’s remote routine.

The two were forced to perform together but separately from their respective homes after Burke and Rigsby both tested positive for COVID-19 last week. However, given his day job as a popular Peloton instructor, Rigsby was more than prepared to turn his place into a temporary ballroom. Dancing to Spears’ 2007 anthem “Gimme More,” Burke and Rigsby did their best to dance in sync, pretending to trade top hats and ending their performance with yellow fans.

The duo scored three 6s for a total score of 18 out of 30, but considering they were dancing separately at home with COVID-19 symptoms, fans on Twitter thought they deserved a much higher score for their skills and resilience.

Some people even accused the judges of being unnecessarily harsh on them while giving other dances with less entertainment value a higher score.

Not only is JoJo Siwa making DWTS history with the show’s first same-sex pairing, dancing with pro partner Jenna Johnson, she keeps impressing viewers with her ballroom skills week after week. After performing an electric cha cha to Lady Gaga and Ariana Grande’s “Rain On Me” last week, the duo switched pop icons for an Argentine Tango set to Spears’ classic debut single “...Baby One More Time,” complete with plaid get-ups inspired by the singer’s iconic uniform in the music video, and all everyone wanted was to watch them ... one more time.

The judges gave Siwa and Johnson a score of 23 out of 30, and viewers at home were just as marveled by their performance, particularly at how well Siwa was able to execute complicated lifts and twists with Johnson. Many Twitter users even thought that Siwa was better at lifting her partner than some of the male pro dancers, who usually tackle those duties in a routine.

Melanie C Gets A Little “Toxic”

The duo earned two 7s and one 8, resulting in a total of 22 out of 30. However, many fans felt like they got underscored — and it wasn’t the first time it happened during Mel C’s run.

While the spotlight was mainly on Spears this week, the contestants also faced their second elimination of the season. Two reality stars landed in the bottom two this week, with Real Housewives of Atlanta’s Kenya Moore and Bling Empire’s Christine Chiu receiving the least amount of votes. However, after she also made the bottom two last week, the judges opted to eliminate Chiu, giving Moore another chance to prove herself next week.

More like this
Britney Spears Shared The Real Reason She Shut Down Her Instagram Account
By Brad Witter
Twitter Has Renamed Ekin-Su After *That* 'Dancing On Ice' Performance
By Sophie McEvoy
Twitter Can’t Make Up Its Mind About Ekin-Su’s 'Dancing On Ice' Skate-Off
By Sophie McEvoy
Twitter Is In Awe Of Taylor Swift’s “Lavender Haze” Music Video
By Jake Viswanath
Get Even More From Bustle — Sign Up For The Newsletter
From hair trends to relationship advice, our daily newsletter has everything you need to sound like a person who’s on TikTok, even if you aren’t.