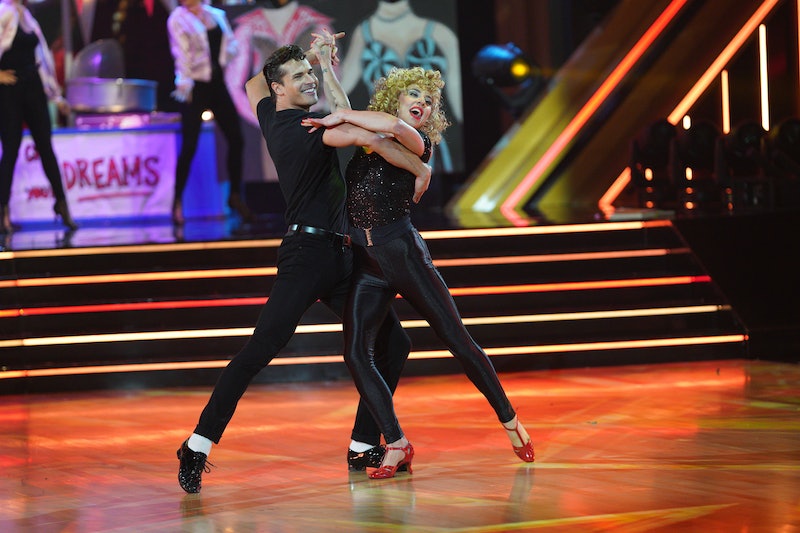 Dancing With the Stars is losing their spice. It was Grease night on the Oct. 18 episode of DWTS, where the celebrity contestants transformed into characters from the classic 1978 musical film and took on routines with music and costumes directly lifted from Grease. Olivia Jade and JoJo Siwa became Sandy, Suni Lee played Cha-Cha, and Kenya Moore embodied Rizzo. However, it was this week’s elimination that was the most shocking part of the episode.

After earning their highest scores of the competition, Melanie C and her pro partner Gleb Savchenko were somehow eliminated from the show, much to fans’ dismay. This week, Sporty Spice took on a quickstep routine set to “You’re the One That I Want,” dressed as Sandy, with the judges calling it her best dance yet. The pair received four nines for a total of 36 out of 40, tying for the second-highest score of the night. And yet, they ended up in the bottom two alongside Olivia Jade, who also received the same high marks for her foxtrot routine set to “Summer Nights.”

Needless to say, neither pair deserved to land in the bottom two after impressing viewers and receiving consistently high scores week after week. But fans were even more peeved when the judges voted to save Jade and send Mel C home, causing an avalanche of backlash on Twitter.

JoJo Siwa isn’t just making history on DWTS — she’s downright slaying it. Dancing with pro partner Jenna Johnson in the show’s first ever same-sex pairing, the Nickelodeon star has been getting consistently high scores each week (her Dance Moms experience is coming in handy). This week, the duo delivered a foxtrot set to “Look At Me, I’m Sandra Dee (Reprise),” donning perfect replicas of Sandy and Frenchie’s “Pink Ladies” get-ups, and to say it was beautiful would be an understatement. Their majestic routine earned the first perfect score of the season, receiving 10s from the judges, and Twitter was in complete awe.

The Real Housewives of Atlanta star has been in the bottom two several times, narrowly escaping elimination last week when Len Goodman opted to keep her over Bachelor Matt James. This week, she proved why she deserved to stay. In a routine dedicated to her late grandmother, Moore performed a rumba set to Rizzo’s signature number, “There Are Worse Things I Could Do.” It was enough to win over the judges’ hearts and high scores, receiving a 36 out of 40 to tie for the second-highest score of the night, and Twitter couldn’t be more thrilled for her.