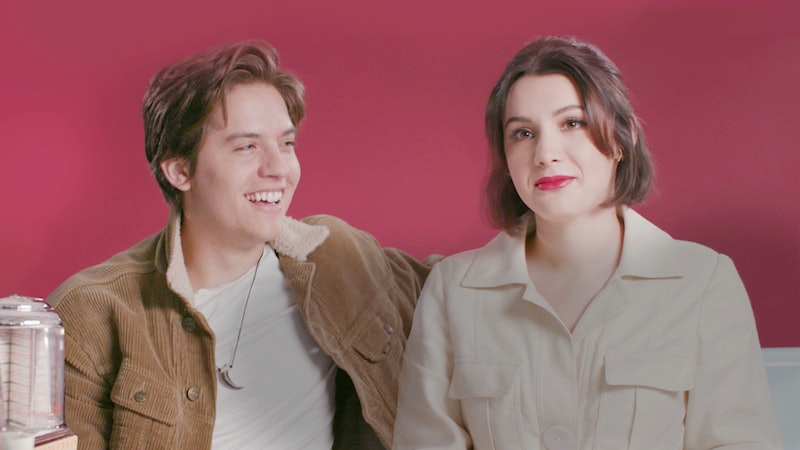 In Banana Split, Dylan Sprouse & Hannah Marks play best friends. But what about in real life? Fans will be happy to know that the vibes are just as strong between the two behind the scenes, and both of them sat down in the Bustle Booth to talk about diner food, each other's talents, and what life was like on the set of Banana Split.

For those who might just be learning about the pair, Sprouse is the twin brother of Cole Sprouse, and the pair rose to fame as child stars on Disney's The Suite Life of Zack & Cody. After the series' success, Sprouse took time out of the spotlight for a few years and he enrolled at NYU. Eventually he decided to return to acting — and also officially embraced his new heartthrob status. Marks is a rising star, as well: She got attention with her debut feature film After Everything, and in 2017, she was named in Rolling Stone's 25 Under 25 Artists Changing the World. Last year, she also scored a role in Booksmart, a teen buddy comedy starring Kaitlyn Dever and Beanie Feldstein.

The two came together to shoot Banana Split; the film was actually co-written by Marks herself. It's a romantic comedy about a teenage love triangle, but instead of falling into tired traditional tropes about two girls fighting over the same guy, the film takes unexpected turns that earned it praise from critics.

Off-screen, Sprouse and Marks have maintained a close friendship, and after seeing them interact in the Bustle Booth, it's clear they know each other inside and out. Check out the video to see what these two besties are up to.