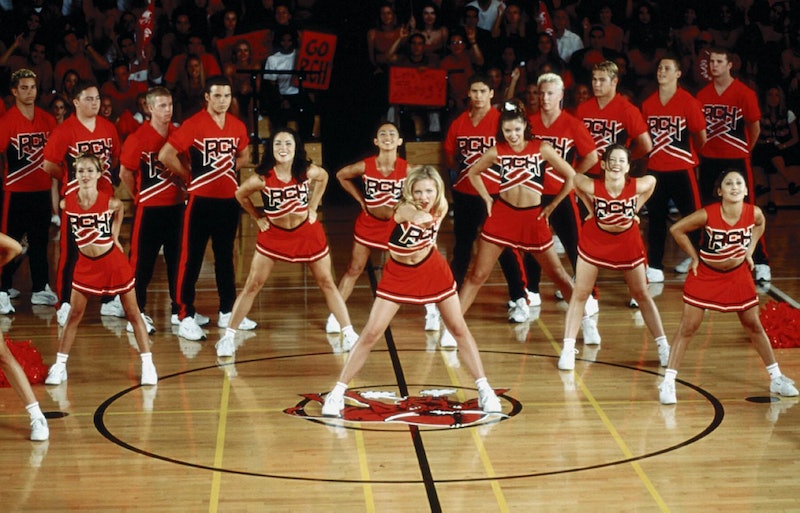 The turn of the millennium is arguably the golden age of teen movies. Between classic rom-coms like A Cinderella Story, vacation fantasies like The Lizzie McGuire Movie, and unconventional coming-of-age narratives like Cadet Kelly, viewers who missed the cutoff to be ’90s kids but are too old to be considered Gen Z had at least one thing: the perfect films to get us through adolescence. The ’80s may have given us John Hughes films, but the early 2000s had Hilary Duff, so really, who had it better?

Whether watching with friends at slumber parties or curled up on the couch with popcorn and candy, the “in-between” kids made so many memories attached to the likes of Elle Woods, Cady Heron, Mia Thermopolis, and Lizzie (plus Isabella and Paolo) that we can’t resist rewatching these flicks today. Somehow, these early 2000s teen movies still resonate with our adult selves, and in many cases, they hit even harder than when we were just teenagers dreaming of our futures as fierce, independent, and effortlessly glamorous grownups. (I still won’t be fulfilled until I perform “What Dreams Are Made Of” at the Roman Colosseum.)

Here are 21 unforgettable teen movies from the early 2000s.

They’re sexy, they’re cute, they’re popular to boot. Kirsten Dunst and Gabrielle Union’s dueling cheerleading squads had the moves, sass, and wit to carry an entire film — plus five straight-to-DVD sequels, including one starring Solange and Hayden Panetierre. Y’all ready for this?

Hilary Duff’s breakout rom-com was a slightly more realistic take on the Disney fairy tale. But the film never loses its camp, with Jennifer Coolidge as her wicked stepmother, Regina King as her pseudo fairy godmother, and Chad Michael Murray as the teen heartthrob of all teen heartthrobs. She still ends up with Prince Charming, but not without delivering one of the best breakup lines of all time: “Waiting for you is like waiting for rain in this drought — useless and disappointing.”

Jennifer Garner’s infamous character Jenna Rink taught our teenage selves that being 30, flirty, and thriving wasn’t all that you thought it would be. Watching it back as adults, this reality cuts even deeper — and makes us want to hunt down Razzles. It’s also a good excuse to learn the “Thriller” dance.

Lindsay Lohan and Jamie Lee Curtis are one of the most underrated comedic duos of our generation. They should’ve been playing mother and daughter in buddy comedy films for years to come, but we’ll settle for the man-stealing, guitar-ripping hijinks of Freaky Friday. If you had to trade bodies with someone, Curtis certainly isn’t a bad option.

Waking up one day and finding out that you are a legitimate princess was the dream of virtually everyone at one point in life. But only Anne Hathaway got to live out this fantasy as Mia Thermopolis, an awkward high schooler who had to quickly learn how to rule an entire country — the iconic fictional land of Genovia — after her mother shielded her from her royal lineage. Extra star power comes from Julie Andrews as Mia’s royal grandmother and Mandy Moore as her mean-girl nemesis.

Save The Last Dance

Julia Stiles is one of the most underrated teen (and current) actors of our time, and nothing proves this more than Save the Last Dance. In this classic 2001 rom-com about two high schoolers who fall in love through their shared passion for dance, her character, Sara, and Sean Patrick Thomas’ Derek help each other achieve their dreams, while having to navigate the roadblocks of being an interracial couple.

The Sisterhood Of The Traveling Pants

Nowadays, it’s so hard to find a good pair of jeans that we’ve all resorted to athleisure. The fact that Bridget (Blake Lively), Carmen (America Ferrera), Tibby (Amber Tamblyn), and Lena (Alexis Bledel) were able to find a pair that perfectly hugs their different body types — then keep in touch with each other’s idealistic summer adventures through those jeans — is nothing short of a miracle. The movie’s success led to a sequel and even talk of a musical adaptation.

A Walk To Remember

As pre-teens, Mandy Moore’s generation-defining rom-com, about a troubled high school senior and a minister’s daughter who fall in love and spend her last days as husband and wife, was one of the first films that we ever sobbed to. Today, it still makes every millennial sob just as hard. Blame the chemistry behind Moore and her leading man, Shane West, whom she crushed hard on in real life.

Mary-Kate and Ashley Olsen’s final film as a duo (and their only one released in theaters) is arguably even better as an adult. All the random pop culture references and cameos from the likes of Supernatural’s Jared Padalecki, Schitt’s Creek’s Eugene Levy, and Dr. Drew (yes, that Dr. Drew) no longer go over your head like they did as a teenager, making it clear just how much of a wacky and nonsensical ride this movie really is. What a last hurrah.

It’s hard to call Thirteen a teen flick, considering its R rating that prevented actual teens from seeing it in theaters. Still, the brave, realistic depictions of drug use, self-harm, and sex that earned the film its rating are exactly why this movie is so important — and cuts even deeper when watching it with adolescence in the rear-view mirror. Plus, this marked Vanessa Hudgens and Nikki Reed’s film debuts, so it’s definitely required viewing.

It’s the teen comedy everyone quoted relentlessly in the early aughts. Napoleon Dynamite follows its socially awkward titular star through numerous endearing struggles, from searching for young love to helping a friend run for class president. Vote for Pedro.

What A Girl Wants

The movie’s title is impressively accurate: Flying to London, falling for a spiky-haired British musician, forming a relationship with your diplomat father you’ve been hearing about for years, and impressing all of his esteemed friends is exactly what a girl wants (and most boys, too). Watching Amanda Bynes getting to live that dream is still just as fun today. As Daphne, she’s a fish out of water in upper-crust London society, and she can’t help but bring a little chaos everywhere she goes.

Confessions Of A Teenage Drama Queen

In what is arguably Lohan’s most underrated movie, she plays a teenage drama queen who will stop at nothing to see her favorite band’s final show, only to eventually learn why people say not to meet your heroes. Watching it as adults, most viewers look back and they don’t believe: that girl was us — at least as fangirl teenagers.

Before we became teenagers, Lizzie McGuire (Duff) riding around Rome on a Vespa with a famous Italian pop star, working with his missing singing partner to conspire against him, and becoming an overnight sensation was our idea of a great class trip. As adults, Lizzie’s Roman fantasy is still our dream vacation. This is what dreams are made of.

In 2004, no slumber party could compare to the rager thrown by Julie Corky (Alexa Vega). In a night to remember, she and her guests sneak out of her house to compete in a citywide scavenger hunt against her mortal enemy, Staci (Sara Paxton), and she ends up landing the boy of her dreams while getting away with everything. Even today, most of us have still never had as good of a night.

Stuck In The Suburbs

Before Taran Killum gained fame as a comedian and a Saturday Night Live breakout star, he was teen heartthrob Jordan Cahill in Stuck in the Suburbs. This iconic Disney Channel Original Movie turns a typical suburban town upside down when Killum’s pop star character shows up to film a new music video. Looking back, it’s hilarious to see him get chased down by DC icons Danielle Panabaker and Brenda Song, and Cahill’s songs remain certified bops.

Military school is literally every kid’s nightmare — unless you watched Cadet Kelly. Jennifer Stone (Christy Carlson Romano) may be the meanest military trainer in history, but once you watch her perform an epic drill team routine with Kelly (Duff), you’ll want to become the next Cadet Captain — maybe just without the rude nicknames.

There’s a reason why millennials celebrate Mean Girls Day every Oct. 3. To this day, it remains one of the funniest, freshest, and edgiest teen movies out there, containing so many iconic one-liners that you can write a book (or a Broadway musical), and effortlessly pushing a message of inclusion and empowerment. Tina Fey’s writing and its star-studded cast, including Lindsay Lohan, Rachel McAdams, and Amanda Seyfried, simply never get old.

In 2002, there was no movie that teenagers anticipated more than Crossroads, and it was for one reason only: Britney Spears. In the Shonda Rhimes-written classic, marking Spears’ first (and so far, only) starring film role, Lucy heads out on a road trip with Kit (Zoe Saldana), Mimi (Taryn Manning), and an unknown hunk to let loose and hunt down her biological mother, who just happens to be played by Kim Cattrall. With those names attached, who wouldn’t want to hop in?

If you could only name one defining female empowerment film, Legally Blonde makes a strong argument for the title. Reese Witherspoon’s Elle Woods embraces everyone for who they are, teaches them the bend-and-snap (a vital life hack), and helps them defeat their problems in the court of law after using her hidden wits and cleverness to get into Harvard. What, like it’s hard?

This unsung Disney Channel Original Movie truly predicted the future but doesn’t get any of the credit. PAT, the name of the “smart house” that the Cooper family won in a sweepstakes, is basically Siri — without the incessant smothering — and half of the automated technology powered by PAT is already installed at your rich friends’ houses. What makes Smart House still resonate today is that it gives a preview of the advancements yet to come.

This article was originally published on Oct. 5, 2015