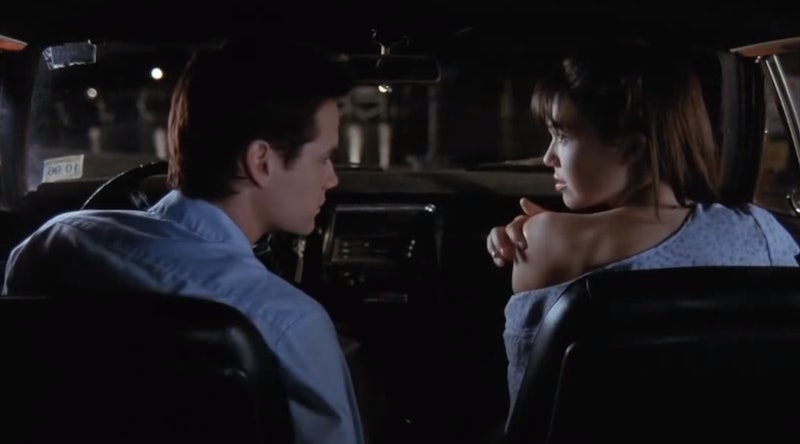 If you had a massive crush on A Walk to Remember's reformed bad boy Landon Carter, then you weren't alone. In an Entertainment Weekly interview celebrating the 16-year anniversary of the movie's release, Mandy Moore revealed she was crushing hard on Shane West during filming. A Walk to Remember (film editing: Emma E. Hickox) was Moore's first major movie role, and according to her, it wasn't always easy to see where Landon ended and West began — but to be fair, she was far from the only '00s teen to have that problem.

The weepie romance has left a lasting impression on many viewers and it seems its stars are still invested in the movie too. Moore played Jamie, a young woman who is unpopular in school, while Landon is the their small town's golden boy. Of course they end up falling in love anyway, because it was hard to be immune to West's charms in the '00s, as Moore explained to EW. She told the magazine,

"Shane was so cool. Everything about him — the way he dressed, the little cigarettes that he smoked, and the music he listened to. He was the character to me and there was definitely a part of me that absolutely fell in love with him. I don't know if I could discern the difference between him and the character at that point in time because, again, it was my first experience doing anything like this and I was a 16-year-old, impressionable girl."

Go ahead and spazz out, because knowing that Moore had a major crush on West during filming is the stuff that dreams are made of. But did West fall for Moore too?

At the time, West was in his '20s, while Moore was still a teenager, so the two were at very different stages in their lives. It doesn't sound like West had any romantic feelings for his co-star at the time, but he was certainly a big fan of her work as Jamie. In fact, West told EW that the studio was considering another actor for Moore's role at one point, and he thought about not doing the film if they didn't cast the "Candy" singer. West explained,

"It just didn't feel right. The person just didn't seem right. When they brought up Mandy, I was like "I don’t know Mandy." Then we had that meeting where we had an audition and were both in the same room and I was like, 'She's perfect for the role.'"

Even though it doesn't seem like West developed a crush on his co-star, his belief that Landon and Jamie's love is forever appears to be just as strong as Moore's. Intrepid BuzzFeed reporter Krista Torres did some digging through Instagram and discovered that West has posted his share of A Walk to Remember throwback pictures over the years. He even posted one to celebrate the film's 16-year anniversary. The caption on the photo of Jamie and Landon snuggling reads "forever" alongside a red heart emoji — seriously, Moore and West's love for A Walk to Remember is too pure for this world.

Knowing that Moore fell for West while she was filming A Walk to Remember certainly adds another layer of sweetness to the already hopelessly romantic film. The next time you watch the movie, just remind yourself that Moore likely felt just as many butterflies when she looked at West as Jamie did when she saw Landon. Few things in life are more bittersweet than teenage crushes, and it's touching to know that Moore was right there with you in finding West and his character irresistible.

As sweet as it is that Moore had a crush on West, it's even sweeter knowing that both actors still look back fondly on the experience of filming A Walk to Remember. Their love for the film and the time they spent together making it appears to be going strong, and that kind of mutual respect is way better than high school crushes.