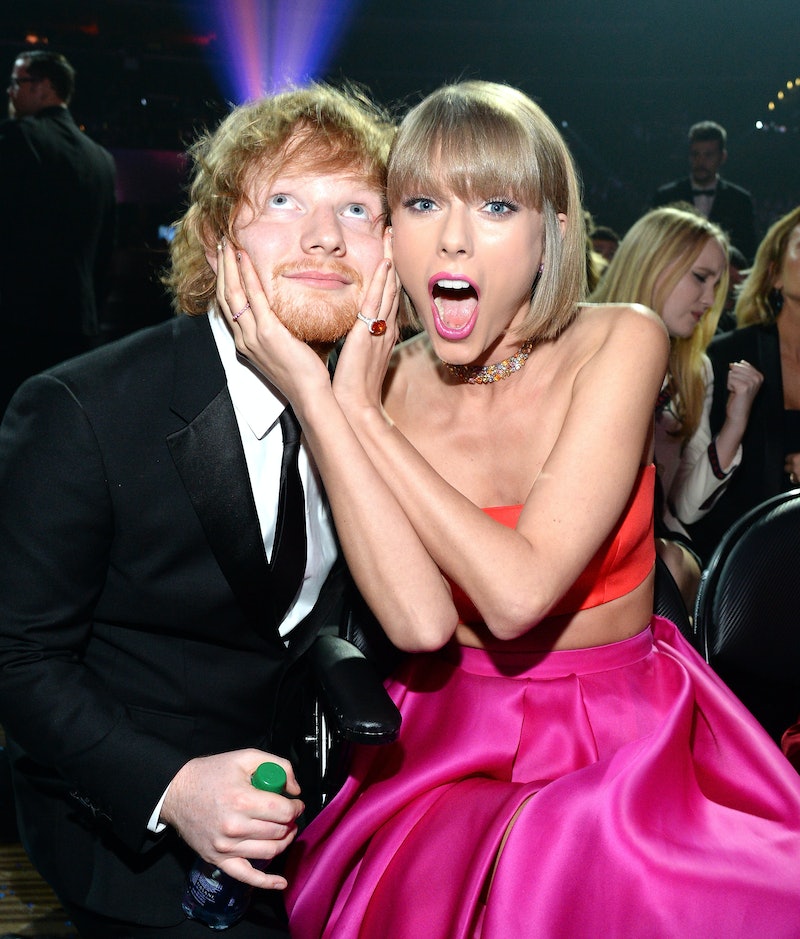 Taylor Swift and Ed Sheeran are the gift that keeps on giving. After dropping multiple collaborations over the years, including “Everything Has Changed,” “End Game,” and most recently, “Run,” the “Bad Habits” singer confirmed that they have another collaboration coming. “‘The Joker and the Queen’ featuring my good friend @taylorswift13 is out this Friday,” Sheeran tweeted on Wednesday, Feb. 9, after performing the song at the 2022 Brit Awards the evening before.

According to Billboard, Sheeran first shared the news in an interview with LADbible ahead of the Brits. He told the outlet that the remix “comes out Friday and it’s with Taylor Swift.” But the “Shivers” crooner has actually been hinting at this duet for a while. “That is my next single, I’m super excited about it,” Sheeran said in December of the song, which is from his = (Equals) album. “I’ve done a collaboration for it that will come out in the New Year with someone I just love.”

Although he didn’t name names, Sheeran’s comments raised a ton of eyebrows from Swifties and Sheerios alike — especially after they uncovered some major Easter eggs in his “Overpass Graffiti” music video from late October. One of the clues appears in a news headline on an iPad. “Sheerio sleuths seeing the signs everywhere,” it reads. There’s also a page from a newspaper that specifically mentions Swift and Elton John.

As if those Easter eggs weren’t obvious enough, fans also noticed that Sheeran’s leather jacket in the video, which has a joker and a queen on the back, has a patch with Swift’s name on it. And as recently as Feb. 5, fans noticed Swift’s name in the song credits in the lyric video on YouTube. “Everyone say ‘thank you ed’ for dropping obvious Easter eggs so we don’t have to clown as hard,” Twitter user @sippingaugust wrote after watching the video for the first time.

It’s not just Sheeran who’s been dropping hints, though. According to many Swifties, the “Message in a Bottle” singer has been hinting at being featured on one of Sheeran’s songs for quite some time. One of the hints was in the Blake Lively-directed video for “I Bet You Think About Me,” which came out in November. When Swift sabotages her ex’s wedding by swapping out white roses for red ones and replacing the olives in martinis with cherries, she also tears into a five-tiered cake and creates an equal sign in the frosting. Lively also tweeted a joker emoji while promoting the video on social media.

Taylor Swift has long been a master at planting Easter eggs in her videos, and it looks like she may have shown Sheeran the ropes. fortunately, the Easter Egg phase is now over and fans will be able to listen to the collaboration on repeat when it drops on Friday, Feb. 11.

This article was originally published on Dec. 24, 2021