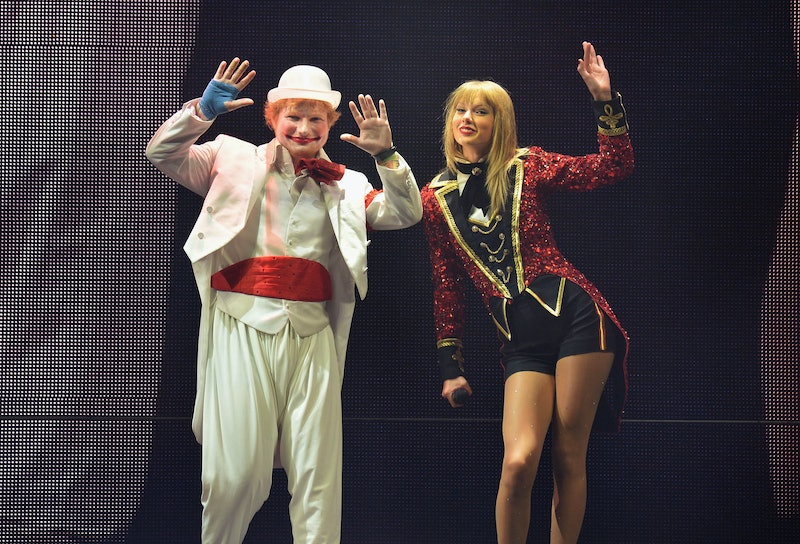 Taylor Swift and Ed Sheeran — two of the most successful musicians in the world — have won eight Grammys separately since they became collaborators and friends in 2012. That’s one powerhouse friendship. Seemingly best friends for almost a decade now, they’re not shy about their mutual admiration for each other. They’re so close, Swift is even partially responsible for helping Sheeran fall in love, as he and his now-wife became close at one of Swift’s Fourth of July parties.

Swift and Sheeran have released three songs together over the years — “Everything Has Changed,” “End Game” and a third collaboration titled “Run,” which is featured on Swift’s new Red (Taylor’s Version). As fans rush to listen to the latest duet between the artists, take a look back at how they met and what they’re up to now.

Sheeran reached out to Swift’s team in 2012 after hearing that she had his “Lego House” lyrics written on her arm when she performed in Australia. It didn’t take long before Swift and Sheeran got together in person, and they started work on music as songwriters are bound to do. That session produced “Everything Has Changed.” which was featured on Swift’s Red that year.

After forming a friendship in 2012, Swift and Sheeran would spend much of 2013 on the road together on Swift’s Red Tour. The run of concerts gave them time to strengthen their bond, with the two buying special mugs and riding roller coasters on their days off. In 2013, their duet became a Top 40 hit in many of countries, and in the U.K., it reached the Top 10.

In the middle of the Red Tour, Swift and Sheeran attended the MTV Video Music Awards. She collected Best Female Video for “I Knew You Were Trouble,” and then they partied together afterward. After wrapping his time on the Red Tour, Sheeran was not done performing for U.S. audiences. He quickly headlined his own show at Madison Square Garden in New York City, and Swift showed up to support her former opener. They even duetted for the crowd on “Everything Has Changed,” with the pop powerhouse wearing an “I Heart Ed” shirt.

2014 saw Sheeran’s star rise, and he became a global star. At the same time, Swift transitioned to pure pop, and did so brilliantly with her Grammy-winning album 1989, which won Album of the Year. Though the two were busy, they still found time to hang out, if only in professional capacities (as far as we know), such as at the Grammys, VMAs, and at the house of a U.S. ambassador.

As Swift continued her lengthy Red Tour, Sheeran popped into her London show to perform “Lego House,” even though he was no longer on the bill. “London, the first time that I ever heard Ed Sheeran’s music, I heard this song on the radio,” Swift said during the “Lego House” performance. “And I thought, ‘My god, he has the voice of an angel ... I’ve got to work with him.”

They also were both featured during the primetime staging of the Victoria’s Secret Fashion Show, though they performed their own tunes and didn’t collaborate onstage for that event.

2015: Taylor Mentions Ed At The BRITs

Throughout 2015, Swift and Sheeran continued their friendship, largely in private, with a few moments shared for public consumption: a text conversation between the two, silly Snapchat pictures, and dress-up photos at Swift’s Fourth of July party.

Swift also won her first BRIT Award that year, and in her acceptance speech, she specifically called out Sheeran, telling him she loved him and explaining that he helped her understand the British people and culture during their time together.

Both Swift and Sheeran won several awards at the 2016 Grammys, and they even competed against each other for more than one prize. Sheeran ended up besting her in almost every category they were included in, with him winning Song of the Year and Best Pop Solo Performance for “Thinking Out Loud.” Swift was thrilled for Sheeran’s wins.

After five years of friendship, the two chart-toppers decided to work together again on a single for Swift’s Reputation album, and for their second collab, rapper Future joined them. The resulting tune, “End Game,” became a top 20 hit in the U.S. The three artists all appeared in the music video, which was filmed without the song playing in order to keep it from leaking.

2019 turned out to be a difficult year for Swift, as the rights to her back catalog were sold, and the ensuing spat between the singer and manager Scooter Braun grabbed headlines for months. Throughout the ordeal, many of Swift’s celebrity friends publicly stood up for her, showing their support for her cause of gaining back the rights to her own songs. Sheeran was surprisingly quiet, and fans noticed this, even calling him out. Eventually, the guitar player commented on the situation via Instagram, explaining, “I’ve been speaking directly to her, like I always do.”

Before the entire world shut down in 2020, Swift and Sheeran found time to have dinner in London. The singers were joined by their partners to celebrate Swift’s boyfriend Joe Alwyn’s birthday. They reportedly spent hours together drinking champagne and playing games.

As Sheeran launched his new single “Bad Habits” in 2021, Swift didn’t waste a chance to show her love, promoting the catchy pop cut on Twitter and Instagram. The superstar shared the music video on Twitter and insisted that she “legitimately cannot get it out of my head.” In an Instagram Story, Swift wrote, “It’s Ed and it’s glitter so it’s a yes for me.”

Later in 2021, in anticipation of the re-release of Swift’s Red, Sheeran confirmed that he and Swift had updated “Everything Has Changed.” Another collaboration between the two — titled “Run” — is featured on Red (Taylor’s Version).

More like this
The Ticketmaster Senate Hearing & Taylor Swift Tickets Debacle, Explained
By Jake Viswanath
Taylor Swift May Miss The 2023 Grammys For Reasons Fans Know “All Too Well”
By Jake Viswanath
Jay-Z Is Performing At The Grammys, Meaning Beyoncé Might Actually Show Up
By Jake Viswanath
Taylor Lautner Thought Taylor Swift's 2009 VMAs Interruption Was A "Skit"
By Alyssa Lapid
Get Even More From Bustle — Sign Up For The Newsletter
From hair trends to relationship advice, our daily newsletter has everything you need to sound like a person who’s on TikTok, even if you aren’t.