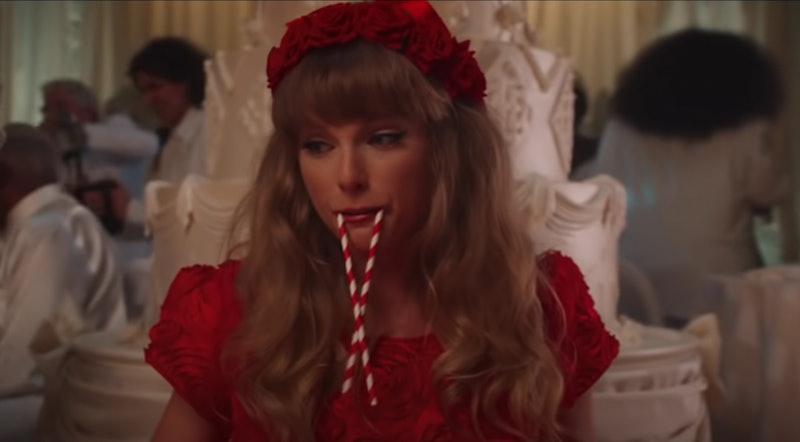 The Red (Taylor’s Version) surprises just keep coming — and the latest is a scathing music video set to the tune of “I Bet You Think About Me.” Taylor Swift and her longtime pal Blake Lively announced that the song would be getting a video on Sunday, Nov. 14, with a pair of matching Instagram posts. And although Swift made it clear that Lively directed the project, she failed to mention that Miles Teller stars in the video as the ex-boyfriend who can’t seem to get her off his mind.

The six-minute video opens with Teller practicing his vows in the mirror. And even though he’s not marrying Swift, he can’t help but see her everywhere he looks. Not only does she stare back at him in the mirror, but she glides across the hardwood floor during the cocktail hour, swapping out white roses for red ones, replacing the olives in martinis with cherries, and tearing into the five-tiered cake with her hands to reveal what should’ve already been obvious: It’s red velvet.

Swift unlocks new levels of pettiness as she gifts Teller’s bride the red scarf that is referenced in her most critically acclaimed song, “All Too Well.” She also hints at the 11-year age difference between her and her ex Jake Gyllenhaal when she takes a seat at the kids’ table and teaches the other girls a variety of magic tricks, including how to give someone the middle finger.

Elsewhere in the video, Teller sees what could have been when he imagines Swift walking toward him in a wedding gown. But after sharing a brief dance, the pop star turns and walks away, grabs her guitar, and continues living rent-free in Teller’s mind by turning everything at the wedding red, including the gifts, the cake toppers, and even the macarons on the dessert table.

Swift and Lively didn’t give fans much time to prepare for the very dramatic and incredibly petty music video, either. “SURPRISE! NEW MUSIC VIDEO TOMORROW at 10am ET,” Swift captioned her Instagram post, ahead of the Nov. 15 release. “I finally got to work with the brilliant, brave, & wickedly funny @blakelively on her directorial debut. Join us as we raise a toast, and a little hell.”

“I Bet You Think About Me” is the lead single from Swift’s re-recorded Red album. Featuring country star Chris Stapleton, it’s one of the “from the vault” tracks that Swift wrote at the time of her original 2012 album but ultimately left off of it. Although she didn’t think they fit then, her return to her past works has given her a chance to breathe new life into her finally-unearthed music.

After making the “I Bet You Think About Me” video announcement on Nov. 14, Swift had more fun with it. She posted a TikTok using the user-created sound that takes Adele saying, “Ladies and gentlemen, her,” and transitions into the song “What’s New.” The video shows a montage of Lively on set, both working hard and having some laughs.

As Swift mentioned, this is Lively’s directorial debut. The Rhythm Section actor been on the other side of the camera in music videos before (not to mention numerous films and TV shows), so it’s exciting that she got to try a new role. While it sounds a little intimidating to have your music video poised to likely get millions of views, finally working with one of your best friends would be a huge thrill.

Lively is already very tied to the multi-Grammy-winning singer’s music. As Swifties know, her kids’ names — James, Inez, and Betty — were all used in the Folklore song “Betty.” In an August interview on SiriusXM, Lively’s husband, Ryan Reynolds, described it as “an honor” for their little ones to get name-checked.

“We thought it was pretty damn amazing. We still do,” Reynolds said, per the Daily Mail. “I still walk down the street and shake my head thinking, ‘I can’t believe that happened.’”

That’s more or less how fans are feeling amid the entire Red (Taylor’s Version) release. From her short film for the 10-minute version of “All Too Well” to her most recent Saturday Night Live appearance and now the “I Bet You Think About Me” music video, it’s been a feast of treats.