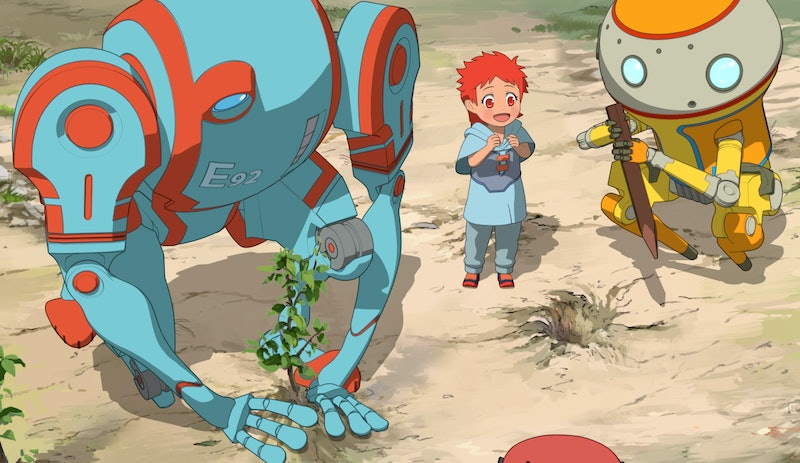 Is the world better off in the hands of robots? That’s the question at the center of Eden, the first Netflix Japan Original anime on the platform. The first season is just four 25-minute episodes long — and Netflix has yet to announce if it’s renewed — but creator Justin Leach explained to Click the City that he definitely has more material for Eden Season 2. “The world is designed [so that we would] be able to tell more stories,” he said. “For example, there’s an Eden 2 [world] that we never talked about, but there’s actually a story and an event that’s happened there, so if the fans want more, then we have more stories to tell.”

Eden takes place thousands of years in the future in the city of Eden 3, which is inhabited only by robots. When two farming robots, E92 and A37, accidentally find a human baby named Sara, they realize that everything they were taught about humans being a myth was wrong. They decide to raise Sara outside of Eden to protect her from Zero, a robot that believes all memories of humans must be destroyed.

Leach, who’s worked on Star Wars: The Clone Wars, first began developing Eden in 1998 after graduating from college. “At the time, we were just talking about environmental issues and so I was kind of thinking about what might happen in the future,” Leach explained to Click the City. In Eden, the robots reversed the devastating effects of climate change, and have been peacefully tending to the planet for years. “I also posed interesting ideas to see humans as extinct and how the world would look like if we were no longer here and if robots were taking care of things.”

Though Zero is the villain, Leach said that his fears around reintroducing humans to Earth will continue to resonate with viewers throughout the series. “It seems like we’re living in an unsure time of what might happen based on our actions [toward] the environment so I think people might ask the same question and wonder if he’s actually right,” he said.

These timely topics might draw in viewers and help land a show renewal, so here’s everything we know so far about a potential second season.

Though we’re still waiting on renewal news, it’s possible the announcement could drop soon; Netflix’s other recent anime, DOTA: Dragon’s Blood, was reneweda month. As for production times, Netflix shows tend to take about a year, while some animated series like The Seven Deadly Sins have taken a year and a half. So if Eden was renewed, a second season could debut anywhere between summer to fall 2022.

Based on Leach’s comment about Eden 2, it’s unclear if a second season would even focus on the characters we met in Eden 3. But they brought together an A-list cast for Season 1, so it would make sense if they wanted all the voice actors to return. This cast includes Rosario Dawson as A37, David Tennant as E92, Neil Patrick Harris as Zero, and teen actor Ruby Rose Turner as Sara.

None yet, but we’ll update this space if one is released! In the meantime, you can always catch up on Leach’s work in Star Wars: The Clone Wars on Disney+. The series was also directed by Yasuhiro Irie, whose other works, Fullmetal Alchemist: Brotherhood and Soul Eater, are also on Netflix.

More like this
'The Crown' Season 6 Has Suspended Filming "Out Of Respect" For The Queen's Death
By Bustle Staff
The 'Freeridge' Cast Shared Their Hopes For A Potential Season 2
By Grace Wehniainen
Netflix Shut Down 'Bridgerton' S3 Rumours About A “Very Dark” Storyline
By Bustle
'The Queen’s Gambit' Season 2 Tweet Wasn’t From Anya Taylor-Joy
By Mary Kate McGrath, Jack Irvin and Grace Wehniainen
Get Even More From Bustle — Sign Up For The Newsletter
From hair trends to relationship advice, our daily newsletter has everything you need to sound like a person who’s on TikTok, even if you aren’t.