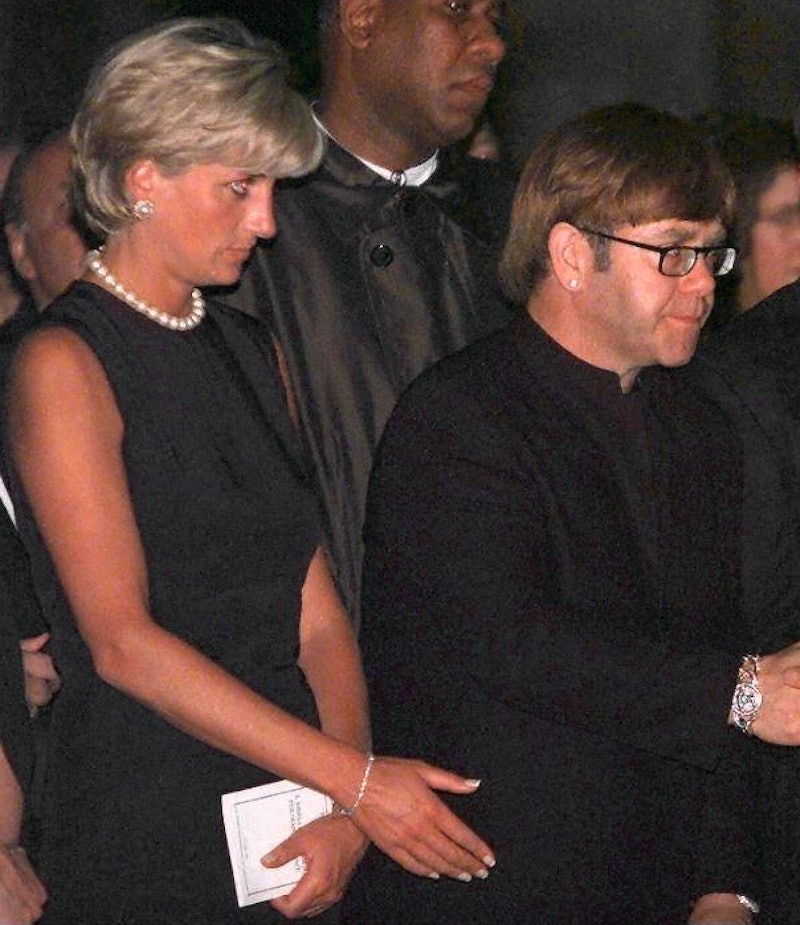 Sir Elton John and the late Princess Diana met at an event in Windsor Castle in 1981, and soon became firm friends. In fact, they spent much of their first meeting bonding over their love of dancing the Charleston. However, after years of harmonious friendship, the pair had a major falling out over a professional collaboration.

In the singer’s 2019 autobiography Me, Elton John, he reveals that he stopped talking to the royal when she pulled out of writing the forward for Rock and Royalty — a fashion photography book put together by Gianni Versace to raise funds for John’s AIDS Foundation. The coffee table book featured semi-nude shots of men — something which seemingly concerned Diana.

“She got cold feet,” John writes. “I think Buckingham Palace didn't like the idea of a member of the royal family having anything to do with a book that featured shots of naked guys with towels draped around them.”

According to the singer, Diana dropped out of the project last minute, claiming she hadn’t been aware of the book’s content. John recalls: "I wrote back to her, calling her out, telling her how much money she had cost the AIDS Foundation, and reminding her that she had seen the book."

John was furious, but began to worry that Diana was “losing touch with all sorts of really close friends” and was instead “surrounding herself instead with people who told her what she wanted to hear.” He notes: "I knew from personal experience that wasn't a healthy situation."

The duo didn’t speak again until months later, when their mutual friend Versace was shot dead on his doorstep. Diana called John at his Nice holiday home the same day. “I'm so sorry. It was a silly falling-out. Let's be friends," she said, per his book.

But when Diana comforted John at Versace’s funeral, he had no idea it would be one of their last moments together. Appearing on Lorraine in 2018, he described their last summer together. “Gianni Versace was murdered, and then Diana rang me up and we reconciled,” he recalled. “And six weeks later, I’m in the same house, and she’s dead. It was an extraordinary and mesmerising summer, and I just couldn’t believe what was going on.”

More like this
The Spice Girls Are Set To Reunite At King Charles III’s Coronation
By Sam Ramsden
Twitter Is Having A Field Day Over Mr Blobby’s Costume Selling For £62k
By Catharina Cheung
Helena Bonham Carter Doesn't Think 'The Crown' “Should Carry On"
By Sam Ramsden
Meghan & Harry Respond To Jeremy Clarkson’s "Apology" Over *That* Column
By Sophie McEvoy
Get The Very Best Of Bustle/UK
Sign up for Bustle UK's twice-weekly newsletter, featuring the latest must-watch TV, moving personal stories, and expert advice on the hottest viral buys.