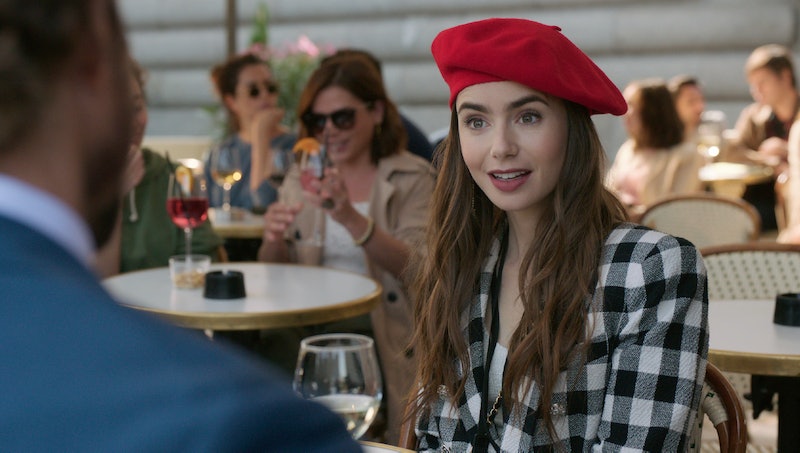 After a year-long break, Emily Cooper is back — and hopefully more proficient in French this time around. While the first season was a complete fish-out-of-water story, Emily in Paris Season 2 sees Emily (Lily Collins) slowly getting better at navigating the city, while still figuring out her love life and making various faux pas at work. Unsurprisingly, both her work and personal life get complicated and tangled up really quickly, so a recap of Emily in Paris Season 1 will help you to keep everything straight. Let’s dive in and take a look back.

Emily Uproots Her Life For Paris

When the first season begins, Emily is handed a surprise promotion. She moves from being a Chicago-based marketer for a pharmaceutical company to a social media manager for the French fashion firm Savoir. Originally meant to take the position was Emily’s boss Madeline (Kate Walsh), but she sends Emily to Paris in her stead after realizing she’s pregnant. So Emily breaks up with her boyfriend and uproots her whole life to Paris, where she immediately struggles to fit in. With no knowledge of the French language or culture, her colleagues and her boss Sylvie (Philippine Leroy-Beaulieu) label her “La Plouc” — “The Hick” — and dismiss her American social media strategies.

But she eventually makes inroads at work, largely because of her @emilyinparis Instagram account becoming wildly successful. After being assigned the account for Vaga-Jeune, a product for menopausal women, Emily learns that the French word for vagina is masculine. So Emily posts on Instagram that “the vagina is not masculine,” leading to the post getting shared by the president’s wife, Brigitte Marie-Claude Macron.

While eating alone thanks to her colleagues ignoring her, Emily meets Mindy (Ashley Park), a Shanghai heiress-turned-nanny who’s running from an embarrassing failure on a popular Chinese singing show. The two become fast friends, and over the course of the show, Emily encourages Mindy to pursue singing again. The season ends with Mindy picking up a job at a drag bar, which leads to her daytime employer firing her when they find out. So Mindy moves in with Emily, hoping that her singing career will take off in the meantime.

And Gets Caught In A Love Triangle

Almost immediately upon moving into her Paris apartment, Emily discovers her downstairs neighbor is a handsome chef named Gabriel (Lucas Bravo). Throughout the season, they have a will-they-won’t-they romance, which includes several awkward run-ins at the apartment that are full of sexual tension. They eventually kiss, but then Emily discovers Gabriel has a girlfriend named Camille (Camille Razat), whom Emily grows close to thanks to Camille’s work connections as a gallery owner. (There are even hints that Camille is romantically interested in Emily, and the two share an accidental kiss.) Gabriel and Emily pretend to forget their own kiss happened — at least, until they backtrack and kiss once more.

Gabriel eventually reveals he’s moving to Normandy, and Emily decides she has to tell him how she feels before he leaves. In the Season 1 finale, she races to find him at the restaurant and they end up having sex, only for Emily to find out the next morning that he is actually staying. That’s when Camille texts Emily saying she wants to talk — and the show ends on a cliffhanger.

She Also Entertains Other Love Interests

Aside from Gabriel, Emily gets caught up in a number of other flings. This includes a pretentious French professor and Camille’s younger brother (whom Emily sleeps with, only to discover later that he’s 17).

She also ends up going on a date with Mathieu Cadault (Charles Martins), the nephew of famous French designer Pierre Cadault (Jean-Christophe Bouvet). But their romance gets cut short when Pierre suddenly threatens to cancel his fashion show.

After her success with the Vaga-Jeune campaign, Emily once again creates another viral moment by making an online poll about whether the De l’Heure perfume ad is sexist. (As thanks, the owner of De l’Heure, who also happens to be sleeping with Sylvie, sends her a box of lingerie.)

Emily then works with Pierre Cadault, a famously difficult client. Things seem to be going well, though, and Emily even ends up modeling one of Pierre’s dresses at a charity event. But when a group of disruptive designers called Grey Space shoot her with paint, the ruined dress ends up all over the press and Pierre threatens to cancel his show. But Emily manages to save the day by holding a Pierre Cadault fashion show right outside of Grey Space’s showcase, essentially crashing their event the same way they did Pierre’s. Emily ends the season on a career high, and we’ll have to see if her upward trajectory continues into Season 2.

More like this
The 'Freeridge' Cast Shared Their Hopes For A Potential Season 2
By Grace Wehniainen
Netflix Shut Down 'Bridgerton' S3 Rumours About A “Very Dark” Storyline
By Bustle
Everything To Know About 'Cobra Kai' Season 6
By Brad Witter
'The Crown' Season 6 Has Suspended Filming "Out Of Respect" For The Queen's Death
By Bustle Staff
Get Even More From Bustle — Sign Up For The Newsletter
From hair trends to relationship advice, our daily newsletter has everything you need to sound like a person who’s on TikTok, even if you aren’t.