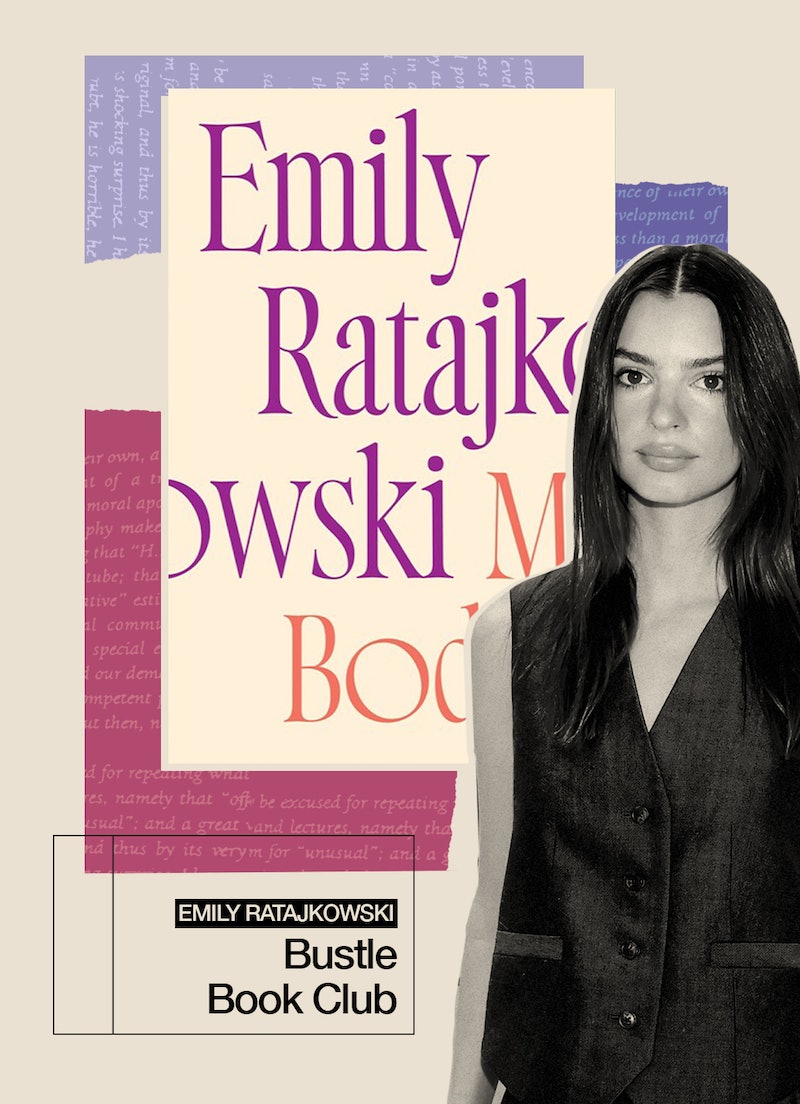 Emily Ratajkowski had been toiling away on a series of essays in relative secrecy. But when she got an inkling that one day she’d maybe, just maybe, like them to see the light of day, she sought counsel. “I reached out to [authors] Ariel Levy, Stephanie Danler, and Jen Silverman. I was sort of like, ‘Hey, love your writing. Could you tell me if I'm terrible?’” the 30-year-old model-turned-essayist tells Bustle. All three replied letting Ratajkowski know that no, she was actually far from terrible. “Stephanie had no idea who I was when I emailed her and was sort of like, ‘I’m not sure what you’re looking for, but if you’re wondering if you’re a writer, you are.’”

Ratajkowski says Danler, the author of Sweetbitter, said “the thing that I needed to hear” in order to begin writing her debut essay collection in earnest. My Body is not your traditional celebrity memoir. It’s decidedly not a hero’s journey through the Hollywood system. Instead, it’s a rumination about the corrosive power of the male gaze, explored through the women it has affected.

Though, at first, Ratajkowski didn’t realize that’s what she was writing. “I had to take a hard look and ask, ‘What am I saying here overall?’ It became clear that every single essay was related to the female body,’” she explains, citing The Empathy Exams, The Reckonings, and How to Write an Autobiographical Novel as her inspirations. “If not my body, then my mother’s body, a famous woman’s body, or a friend’s body. All of the essays were around the politics of the female body.”

While it’s a collection that should be required reading for everyone, Ratajkowski is most hopeful it will reach teenage girls. “I want them to give themselves a break,” she says of the message she hopes they take away from the book. “There’s so much pressure. Even if you’re going to high school: What do you wear? Do you have sex with that boy? Do you not? How do you represent yourself in the world?” Below, Ratajkowski reflects on writing from bed, The Right to Sex, and the rough drafts that fill her Notes app.

On reading a spiritual companion to My Body

The Right to Sex by Amia Srinivasan is definitely the best book I’ve read recently. It came out last month and it’s incredible, and I think not unrelated to some of the ideas in My Body. Just the idea that men would feel this right to having sex or a right to women’s bodies. Rather than just dismissing it, she’s taking a harder look and asking, “Well, who does have the right to sex? When does that apply? How does that work?” She’s unafraid to question things that we've sort of accepted as untouchable.

On writing rough drafts in her Notes app

Sometimes when I’ve had a busy but quiet morning, all of a sudden I’ll be hit with sentences. I can’t always get them down, but I’ll just start writing in my Notes app. A lot of the times I’d copy and paste what I’d written into a Word document — to be clear, not fully formed, real sentences — but it would be helpful because once you start writing an essay, it can be really hard to continue that kind of stream of consciousness since you’re so in it with the words. Whereas having that kind of skeletal stream of consciousness [in the Notes app shows] “Oh, and that made me think of this, and I think that’s somehow connected."“

I try to have a morning routine when I go to write, where I shower and make myself feel half-decent so that I can face whatever might come and not feel like a piece of sh*t. To be clear, that means me getting back into bed — I like to write from bed, which my husband thinks is absolutely insane — with a little bit of makeup on and wearing something other than what I slept. It does the trick.

On having the ultimate deadline to finish the book

So much of the book had been written before I was even thinking about it as a book. So when it came time to have deadlines, things got more difficult for me because I didn’t have that free-flow, zero pressure thing. I was very nervous and those were the days where it became really hard for me to write because the pressure felt so much. Also, I was pregnant. I had this real deadline of the growing baby and knowing, “He’s going to be here, and I want to have this book as done as it possibly can be.”

More like this
Taffy Brodesser-Akner Can Write Anywhere — Even The Bathroom At Bloomingdale’s
By Samantha Leach
Who Is Pete Davidson Dating? He "Courted" Emily Ratajkowski At A Knicks Game
By Jake Viswanath
Emily Ratajkowski & Pete Davidson's Astrological Compatibility, Revealed
By Nina Kahn
Steve Banerjee's Wife Irene Sold The Chippendales Brand Prior To Her Death
By Brad Witter
Get Even More From Bustle — Sign Up For The Newsletter