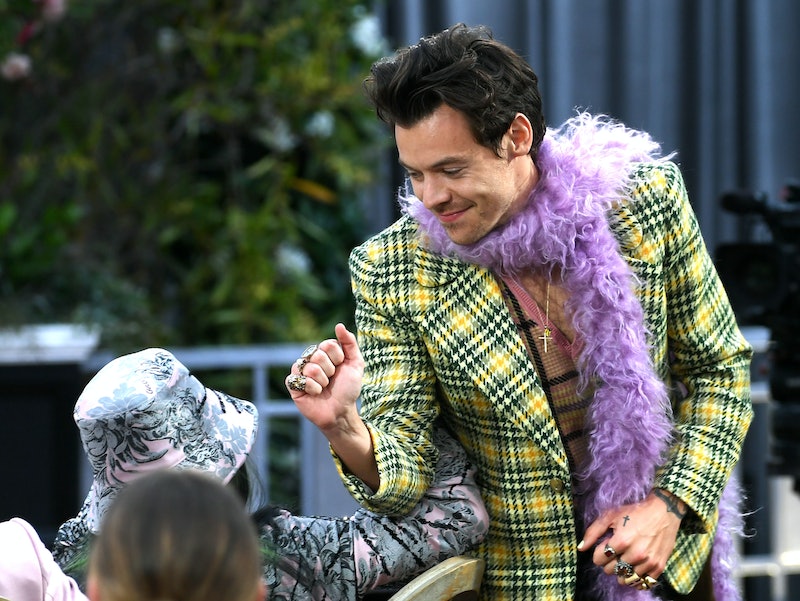 Spoilers ahead for Eternals. Harry Styles’ Eternals scene might have been short, but it’s already broken the Marvel fandom in the best way. In his debut as Eros, Styles introduced a hero as dreamy as the man who plays him — an Eternal with the power of pleasure who can prompt “a euphoric effect” in friends and lovers, but just as easily pacify foes with the same skills. And of course, as that mid-credits scene teases, he’s ready to help rescue the Earthly Eternals from Arishem. According to the Eternals cast, though, there’s actually more to the story. Or rather, there was supposed to be.

In an Entertainment Weekly roundtable posted on Nov. 9, Lauren Ridloff (Makkari) talked about shooting a scene in which Eros and the Eternals were sitting in the Domo, convening with Arishem with their eyes closed. While we’ll have to cross our fingers to see the Eternals deleted scene at some point, the behind-the-scenes details are even better — and point to a seriously committed Styles helping the filming process along.

“Every time [Chloé Zhao] yelled, ‘Cut,’ the interpreter would have to run around and tap me on the shoulder,” explained Ridloff, who is deaf. “And then after a couple times, Harry was just like, ‘Is it OK if I just tap you and cue you when we stop shooting?’ And I was like, ‘Yeah, thank you!’ I mean, that’s just who Harry is. He watches out, and he just thinks about, what can I do?”

Before shooting, though, Ridloff confessed she wasn’t exactly a Styles stan. “I was like, Harry? Who’s Harry? I don’t know who Harry is,” she remembered upon learning the “Watermelon Sugar” singer was cast in Eternals. “And my baby sister was like a super fan of Harry. And I don’t think she ever forgave me for that. But of course, now I definitely know who Harry is ... He’s such a lovely, kind person.” Styles even taught Ridloff how to meditate, she said, and owes her a list of some meditation music.

In joining the newest (but also oldest) family in the Marvel Cinematic Universe, Styles made an impression beyond filming, too. Lia McHugh (Sprite) recalled attending his concert with the group, “and he was signing a little bit to Lauren on the stage. It was so sweet.”

“He came in, and he was like one of us immediately,” said Salma Hayek (Ajak). “Super lovely, super fun. A couple of parties, he would come, hang out, play the piano, sing with everyone, play with everyone. We love him. He’s great.”

For his part, Styles hasn’t commented on his MCU debut just yet — though one pre-Eternals TikTok seems to show him reacting nervously to a poster that read, “CAN I GET A FINGER SNAP FROM THE BROTHER OF THANOS?”

Of course, it’s only a matter of time before we see more Styles in the MCU — whether it be in Eternals 2, or via a cameo in one of the many upcoming projects ahead.