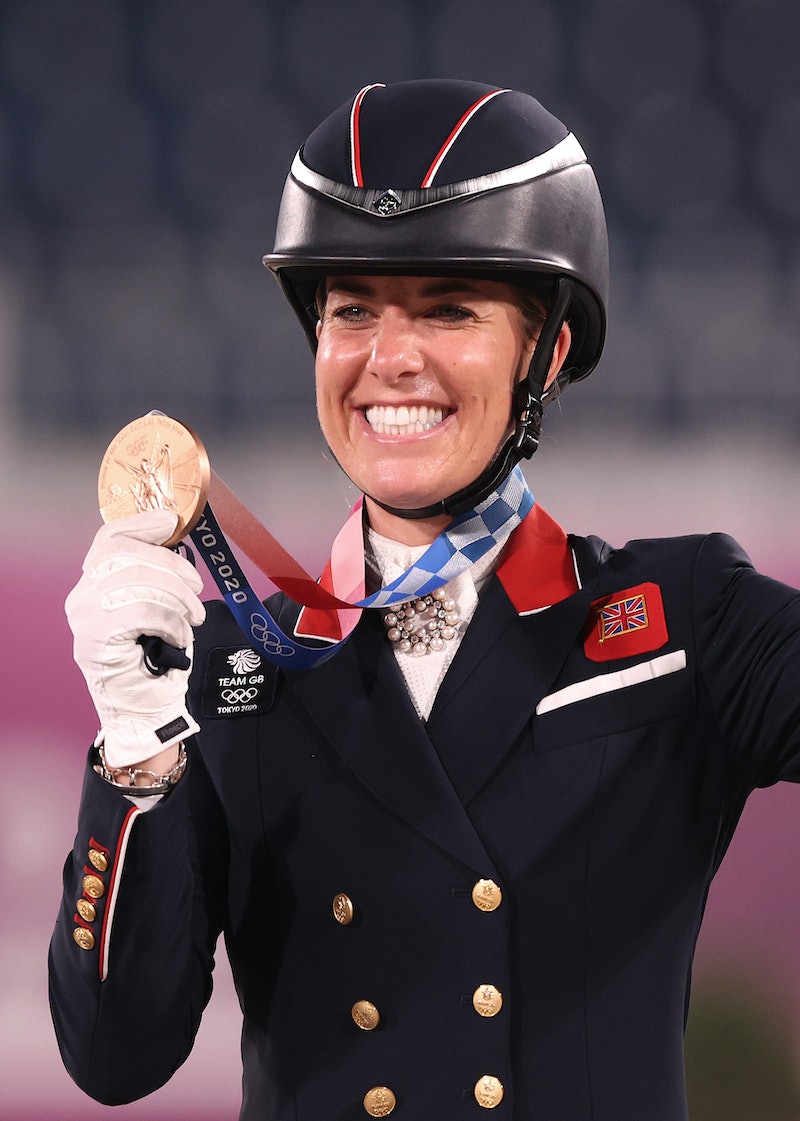 Charlotte Dujardin has just become the most decorated female Briton in Olympic history following a win at Tokyo 2020. Competing in the individual dressage event, Dujardin won bronze, adding to the three gold medals, one silver, and one bronze she already had.

In a tense event, Dujardin managed to beat off German rider Dorothee Schneider to obtain an impressive score of 88.543% and take home a medal. This win sees Dujardin surpass rower Katherine Grainger to be the most decorated Team GB female Olympian. Now at the top spot and with Grainger in second, the chart also sees tennis player Kathleen McKane Godfree pushed down to third place, and cyclist Laura Kenny moved into fourth.

If you’re interested to hear more about Dujardin, here’s a brief rundown of everything you need to know.

It’s been a long road for Dujardin, 36, who has had a hugely successful career in equestrian dressage. Her Olympic journey began in 2012 in London, where she won team and individual dressage gold on her trusty horse Valegro.

Later at Rio in 2016, she once again won gold in the individual competition, and silver as a team. This led to her most recent win at Tokyo 2020, where she won individual and team bronze on her new horse Gio (nicknamed Pumpkin), who she owns with Great Britain teammate and mentor Carl Hester.

This win resulted in Dujardin being named the most decorated female Olympian of all time, which Dujardin called “mind blowing.”

“To think I have achieved all of that,” she told BBC Sport. “It's just so surreal. Being level with Katherine Grainger was good enough, and now I have beaten her. It's incredible, and I can honestly say I am proud of myself.”

As well as her Olympic medals, Dujardin has also won two European Dressage Championships titles in both 2013 and 2015. She has also been awarded an OBE and later a CBE for her services to sport.

Dujardin is on Instagram under the handle @charlotte_dujardincbe and has nearly half a million followers. She is very active on the social media platform, sharing plenty of behind-the-scenes shots of her training.

Since winning her most recent medal, Dujardin has posted a number of snaps sharing her pride and disbelief.

Despite going from strength to strength in her sport, Dujardin hasn’t had the easiest run personally, with 2019 being a particularly tough year for her when she split with her long-term partner of 13 years, Dean Golding.

In addition, she was also stripped of a silver medal she had won at the European Championships after her horse Valegro was seen with blood on his side, which led to instant disqualification.

Speaking to Horse and Hound in January 2021, she said of 2019: “It really wasn’t the greatest year in 2019; I found the Euros very tough and going through personal issues at the same time, in splitting up with Dean, felt like a double whammy.

“I was trying very hard not to allow my personal life to affect my profession and let it show, but it was hard.”

It is unclear whether Dujardin is dating anybody currently but, either way, the future is looking extremely bright for the athlete.