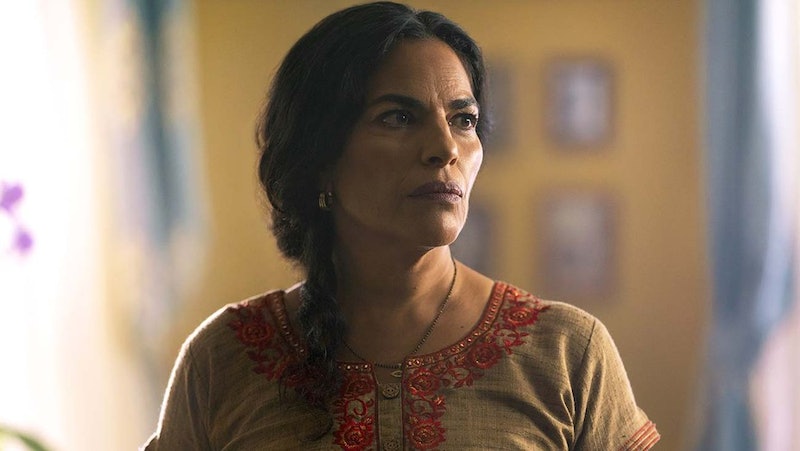 By now, you've probably seen the ads for Welcome to the Blumhouse: a slate of new October releases on Prime Video from Jason Blum's Blumhouse Productions. One of the four new films, Evil Eye, is based on Madhuri Shekar's #OwnVoices audio play of the same name. Shekar's play won the Audie Award for Best Original Work, not so casually joining a roster of 2020 winners that includes Michelle Obama's Becoming and Alix E. Harrow's The Ten Thousand Doors of January.

Madhuri Shekar's Evil Eye audio play is an epistolary "novel" for a new medium. An Audible Original that runs just under two hours, the play features a full cast reading voicemails and phone calls from Usha, her daughter Pallavi, and more. The story revolves around Usha's obsession with finding a mate for her Indian-American daughter. Convinced that the titular curse was inflicted upon Pallavi before she was born, superstitious Usha worries when the younger woman enters her late 20s without a husband. She attempts to play matchmaker, but fails to find someone her daughter will agree to marry. Instead, Pallavi makes her own match with Sandeep — a man Usha cannot bring herself to trust.

"The story is deeply personal, and therefore very much about a culture that I belong to, one that I grew up with," Shekar tells Bustle. "I don't see this movie as one about the Indian experience as much as it is one about this specific family's experience. How Pallavi and Usha experience the world is deeply informed by the cultures that they are from — and Pallavi, as an Indian American, naturally has a different way of seeing things than her Indian mother does."

Fans of the audio play will be in familiar territory watching Evil Eye. Shekar penned the screenplay, and the film adaptation sees Bernard White (Silicon Valley) reprise his audio play role as Usha's husband, Krishnan. What's different, however, is that the on-screen format gave Shekar the space to explore Pallavi and Sandeep's relationship on a more intimate level.

"I was most excited about getting to write Pallavi and Sandeep's love story for the screen," Shekar says of her work on the adaptation. "In the audio play, due to the structure and format, we don't actually get to see these two falling in love. We only hear about it second-hand. But writing those scenes, and then seeing Sunita Mani and Omar Maskati bring their incredible chemistry to play, was really exciting."

A joint production from Priyanka Chopra Jonas' Purple Pebble Pictures (PPP) and Blumhouse, Evil Eye casts Sarita Chowdhury (A Hologram for the King) as Usha, Mani (GLOW) as Pallavi, and Maskati (Better Call Saul) as Sandeep. Directors Elan and Rajeev Dassani previously worked together as visual effects producers on a number of hit shows, including How to Get Away with Murder and Grace and Frankie. Shekar says that collaborating with South Asian filmmakers was crucial to maintaining the audio play's cultural identity in its transition to the screen.

"It's about choosing the right collaborators from the start," she says. "I want to give a special shout-out to Nina Aujla, formerly of PPP, who was the one who fell in love with the script and brought it to Priyanka Chopra Jonas. Having an incredibly influential creative like PCJ on board gave me the reassurance that this project would be on the right track. After that, finding South Asian directors who deeply connected with the script and understood it intimately was the next most important thing. The Dassani brothers are the perfect directors for this movie. Once you have the right collaborators, you won't need to work so hard to maintain cultural integrity. It's baked in."