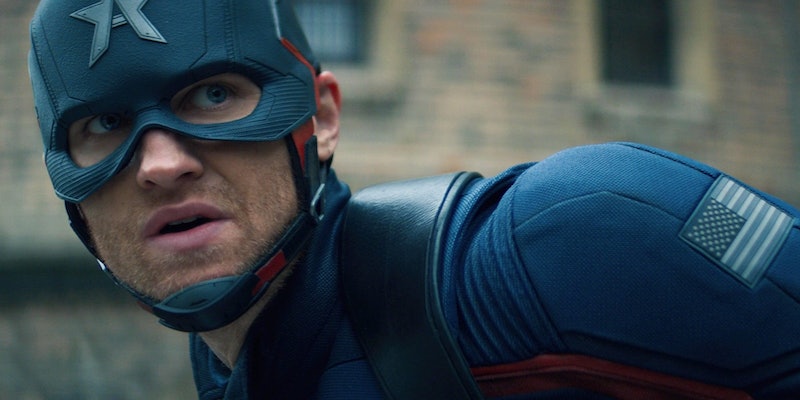 Spoilers ahead for The Falcon and the Winter Soldier Episode 5. The Falcon and the Winter Soldier Episode 5 ends with a troubling post-credits scene. John Walker, newly fired from his gig as Captain America for murdering a man in the previous episode, is seen welding a new shield. For a split second before we see John, we hear him hammering. It’s almost reminiscent of Tony Stark’s creation of Iron Man, which was echoed in the Endgame credits. But this is definitely foreshadowing something more sinister.

For starters, John seems vengeful. He’s forging his old military medals onto the shield after telling the government earlier in the episode, “I dedicated my life to your mandates. I only ever did what you asked of me, what you told me to be and trained me to do.” A photo of him and Lemar can also be spotted in his workspace, clearly fueling his violent quest for revenge. He might have convinced Lemar’s family that the man he murdered was Lemar’s killer, but he knows Karli, the real culprit, is still out there. He probably wouldn’t mind fighting Sam and Bucky again, either.

After his stint as Captain America in the comics, John Walker becomes U.S. Agent — described by Marvel as an Avengers collaborator whose “smug, abrasive attitude alienated his teammates.” John’s post-credits scene, then, could be interpreted as him leaning into the new U.S. Agent identity now that Sam has taken back the shield and will likely become Captain America. However, in the comics U.S. Agent was appointed by the Commission and worked with the Avengers in an official capacity; in the show, John seems to be going rogue. The bright, spray-painted colors on his makeshift shield make it look like he’s attempting a straight-up Captain America copy, as opposed to the black, red, and white look U.S. Agent sports in the comics. This also tracks with John’s insistence, twice, that he’s still Captain America — once to Sam, before he almost kills him, and once to the government officials who fire him. He’s not interested in giving up the title just yet, so perhaps the show is setting up a Captain America vs. Captain America showdown in the finale (and not the funny time-travel kind we saw in Endgame).

Further complicating John’s project is the surprise appearance of a new character earlier in the episode: Contessa Valentina Allegra de Fontaine, played by Julia Louis-Dreyfus. “Val” tells John that taking the serum has made him “very, very valuable to certain people.” In the comics, according to Marvel, she is a triple-agent with ties to Hydra and Nick Fury alike, so it remains to be seen how much she can be trusted (at this point, perhaps she’s even the mysterious Power Broker). Either way, she is a powerful person who thinks John’s violence was justified and potentially wants to use him as a weapon — even though she leaves him to DIY his own gear.

More like this
Netflix Shut Down 'Bridgerton' S3 Rumours About A “Very Dark” Storyline
By Bustle
Bill & Frank’s 'The Last Of Us' Episode Has Twitter Emotionally Wrecked
By Alyssa Lapid
Here’s What Happens To Bill & Frank In 'The Last Of Us' Video Game
By Brad Witter
Helena Bonham Carter Doesn't Think 'The Crown' “Should Carry On"
By Sam Ramsden
Get Even More From Bustle — Sign Up For The Newsletter
From hair trends to relationship advice, our daily newsletter has everything you need to sound like a person who’s on TikTok, even if you aren’t.